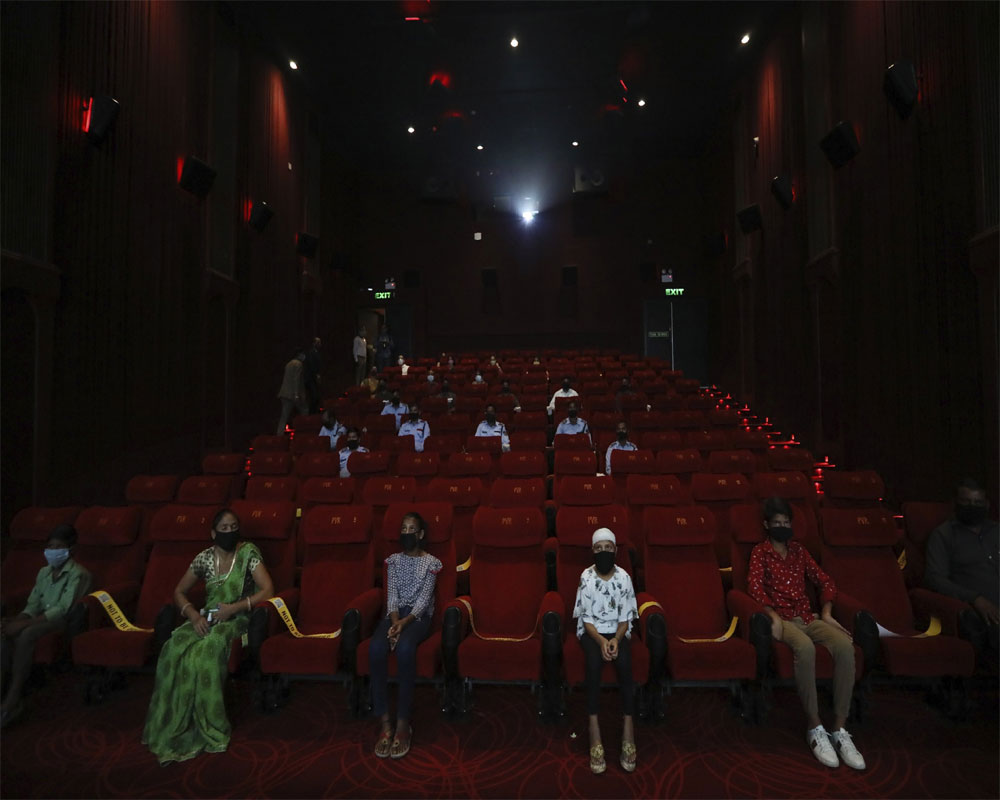 Cinemas in several states including Delhi-NCR opened doors to patrons on Friday after seven months the turnout everywhere has been far from impressive, owing to the Covid scare. Industry experts however are happy to resume operations and expect footfalls to improve by the weekend ahead.

The Centre has allowed 50 per cent occupancy in cinema halls as of now, amod stringent Covid precaution measures.

"We weren't expecting it to houseful from day one. We didn't even expect to have 50 per cent occupancy. About 50 to 60 people turned up for the 12 pm show of 'Housefull 4'," Raj Kumar Mehrotra, general manager at the Capital's Delite Cinema, told IANS.

"But we are very happy that things have started. Today, 50 to 60 people are sitting in the hall. If they inform their family members, that it is safe to watch a film in a theatre, then the cycle would start. People are still afraid and the fear needs to be removed gradually," he added.

"Cinema halls in Delhi-NCR, Uttar Pradesh, Madhya Pradesh, Uttarakhand, West Bengal, and Gujarat have opened. We had around 25 to 30 people attending the morning show that started at 11am. I suppose it will go up by evening with word of mouth. We expect the turnout to improve over the weekend. We are screening films such as 'Section 375', 'War', 'Malang', and 'Queen', besides regional films in Punjabi, Gujarati and Bengali," Sawhney told IANS.

"We have opened theatres after a seven-month gap, and there is no new content. Even otherwise, this has always been a dull period. Pre-Diwali and pre-Navratri is always a dull period, and these are extraordinary times. As far as occupancy is concerned, we should not discuss this right now," he said.

More than occupancy in the immediate scenario, the focus for the cinema exhibition business right now seems to be on confidence-building measures to woo back the audience.

"In terms of sanitisation, hygiene, and maintaining overall environment of cinemas as per protocols and following government guidelines, we want to bring the audience back to cinemas," said Raizada.

While the fear of contracting Covid-19 is mostly the cause of people skipping the theatrical experience right now, it seems like old content being screened isn't getting the patrons excited either.

Would theatrical release of films that have already streamed on OTT over the past months be a smart idea, as a section of the trade is mulling? Raizada is against the idea.

"If we do this, we will set a wrong precedent. Everyone will say that movies should release simultaneously (on OTT and theatres). Then the cinema hall experience will lose its charm," he said.

Explaining his point further, Raizada said: "Any movie that releases in a theatre goes to OTT or small screen only after eight weeks (of theatrical run) or so. That way, the movie gets its due run and a bigger frame experience. After that, it goes to the small screen."

Mehrotra weighed in on the topic and said: "For every film, there is a commercial agreement. Today, OTT is a different platform. So obviously, while striking an agreement with producers they must have obtained exclusive rights saying that the producer can't release the film elsewhere apart from that specific OTT platform. Due to this, others can't play the film. So, we didn't even try (to get the films released on OTT platforms)."

Looking forward, he noted that new films will be releasing in soon. "From October 30 onwards, we will be screening the Hollywood film 'The New Mutants'. Others films will follow," Mehrotra noted.

Till then, they are just happy to open doors to the public.

"It is extremely exciting to be back in action. Millions of movie lovers across the country have been waiting for cinemas to resume operations. We are certain that the SOPs prescribed by the I and B Ministry, clubbed with some of our exciting technology-driven measures and concepts like private screening, will help us welcome back guests in our own unique style," said Alok Tandon, CEO, INOX Leisure Limited. Tandon is also Director at Multiplex Association of India (MAI).

Devang Sampat, CEO of Cinepolis India, added that the exhibition industry has been one of the most affected industries in India owing to the lockdown. "Cinema theatres were one of the first establishments to be closed mid-March. So, we are excited as we open the doors to patrons across multiple cities in India today. We have been receiving overwhelmingly positive feedback from our patrons on social media. We look forward to providing a world class movie experience."