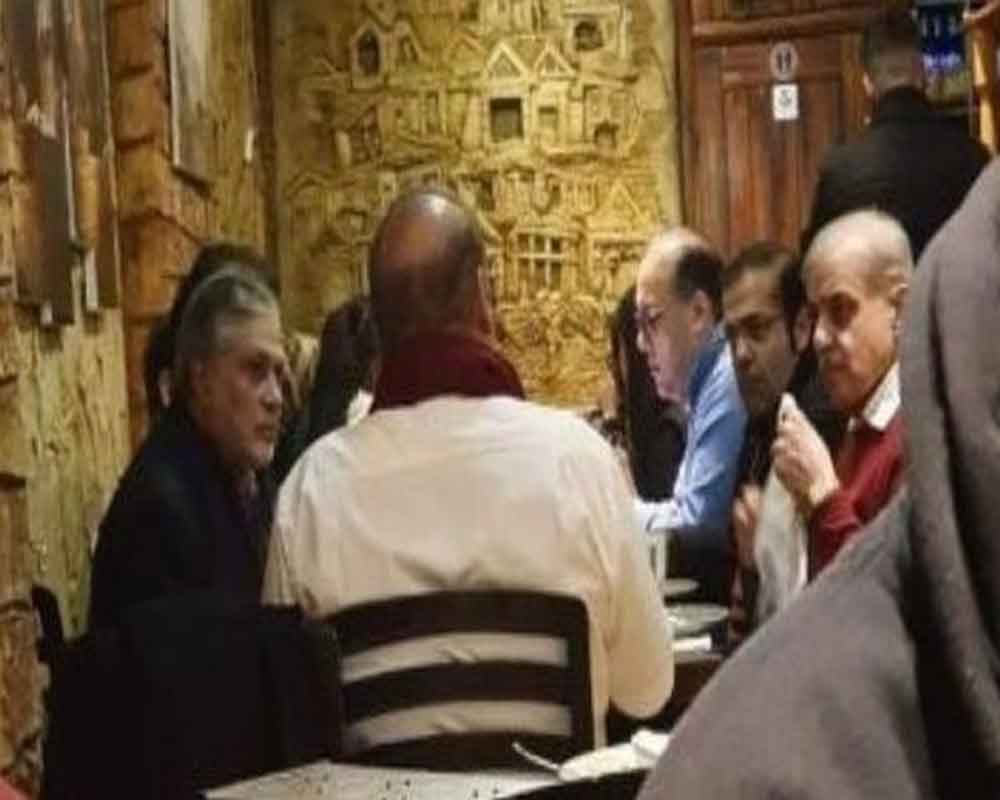 A fresh picture of ailing former Pakistan prime minister Nawaz Sharif at a London restaurant along with some family members has gone viral on social media, leading the Opposition to cast aspersions over the "serious nature" of his health.

Sharif, 69, left for London on November 19 in an air ambulance to seek medical treatment, a month after he was released on bail from a seven-year prison sentence for corruption.

The PML-N supremo is undergoing treatment of multiple diseases including coronary artery disease (CAD). The CAD is the narrowing or blockage of the coronary arteries due to which the heart does not receive the blood it needs, leading to acute chest pain and, in some cases, a fatal heart attack.

In the photo leaked on Monday, Sharif appeared to be stable and sitting in a restaurant with his son Hasan, PML-N president Shahbaz Sharif, his son Salman and former finance minister Ishaq Dar.

"In London's intensive care unit, the treatment against plundering is underway and all patients present (there) are feeling better," the outspoken minister said.

The photo was also reportedly discussed at a meeting chaired by Prime Minister Imran Khan in Islamabad, the Dawn newspaper reported.

It may cause problems for him in securing extension in his stay abroad from the PTI-led Punjab government which has become sceptical about the "serious nature" of his health, it said.

At the time of Sharif's departure for London, Khan had taken a dig at him, saying doctors were of the opinion that "this man could die any minute if he did not go abroad for treatment. But he suddenly recovered and looked perfectly fine as he got a glimpse of the London-bound air ambulance".

Sharif's PML-N slammed the ruling party leaders for doing politics on their leader's health, saying the government should come out of the "Sharif phobia" and concentrate on addressing important issues facing the country.

"Doctors have advised Nawaz Sharif to go out for change of environment. They insist that staying indoors will not be good for his health. Therefore, Sharif has started going out. On Sunday, Sharif along with his family members had a walk to catch fresh air and had tea in a restaurant," the leading daily quoted a PML-N leader from London as saying.

Sharif was shifted from jail to the Services hospital in Lahore in October after his health condition deteriorated. Doctors then recommended him to get treatment abroad.

The Pakistan government allowed Sharif''s travel for medical reasons but put the condition that he submit an indemnity bond as a guarantee that he would return to the country after getting treatment. He, however, rejected the condition and challenged it in courts.

Sharif was granted bail by the Islamabad High Court on humanitarian grounds in the Al Azizia case and by the Lahore High Court in the ongoing Chaudhry Sugar Mills case, in which he is a suspect.

In November, he was allowed by the Lahore High Court to travel abroad for treatment without any bond.