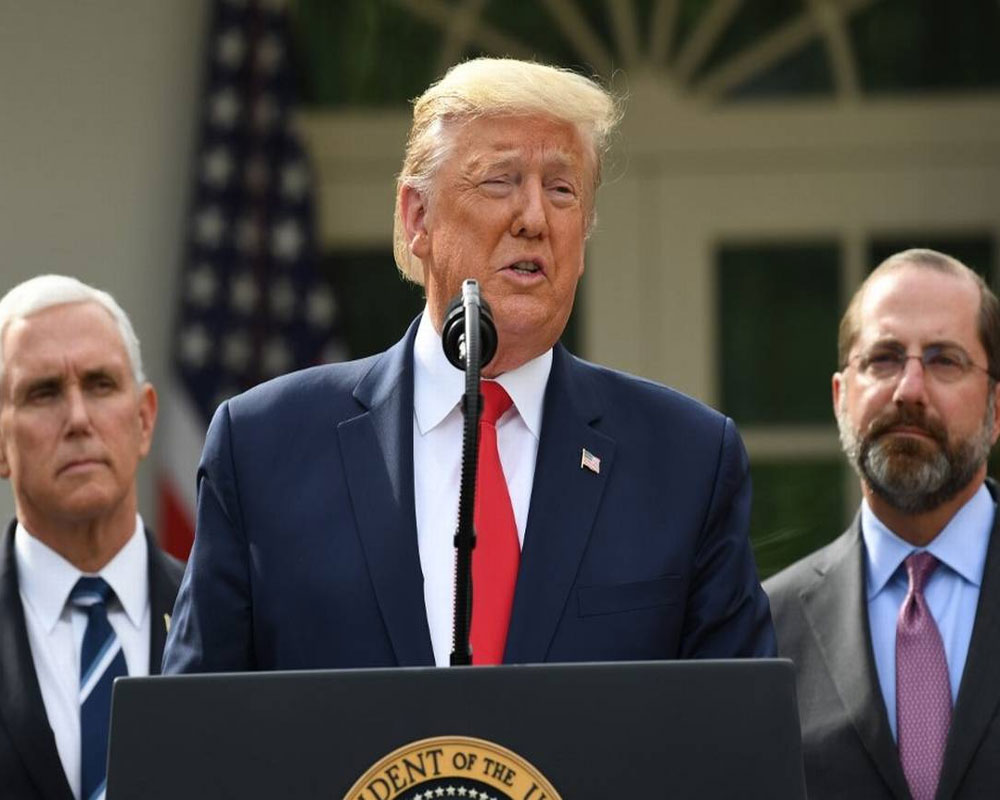 US President Donald Trump on Friday signed into law the historic USD 2 trillion rescue package to help the Americans and secure the country's economy ravaged by the coronavirus pandemic that has infected nearly 100,000 people across the nation.

"Help is on the way," Trump assured his countrymen as he signed the Bill in the Oval Office at the White House. The Senate and the House of Representatives earlier passed the Bill.

"We got hit by the invisible enemy and we got hit hard," he said, adding the economy would come roaring back. "I think we are going to have a tremendous rebound."

The legislation among other things gives USD 3,400 for most of the American families of four, and billions of dollars' worth of financial assistance to small and medium businesses, and big corporations like Boeing.

"This is a very important day. I've signed the single biggest economic relief package in the American history and, I must say, any other package by the way. It is twice as large as any relief every signed," the President said.

The magnitude of the package can be seen in the context that India, one of the top five economies of the world, is estimated at USD 3 trillion.

"I never signed anything with a T on it," Trump said.

"I want to thank Democrats and Republicans for coming together and putting America first," he said.

The first stimulus check is likely to be sent to the Americans in the first week of April.

More than half of the country's 330 million population is now confined in their homes, Major Disaster Declaration has been announced in over a dozen states and a national emergency has been declared.

A record three million people have applied for unemployment, the entire travel and tourism industry have come to a standstill, companies have stopped their operations and only essential services are running in the US.

The United States is now the hotspot of the coronavirus in the world, where according to Worldometer, over 100,000 confirmed cases of the contagion have been recorded, 1429 people have died and 2,463 people are in critical condition.

New York, which is the financial capital of the world, accounts for nearly half of the total cases and more than 500 people have died in the Big Apple alone.

Trump, the White House said, is signing bipartisan legislation to provide relief to American families and workers during the coronavirus outbreak.

Noting that the CARES Act provides much needed economic relief for American families and businesses who are hurting through no fault of their own, the White House said the legislation will provide assistance to America's heroic healthcare workers who are on the frontlines of the outbreak.

According to the White House, the legislative package brings security to American families by providing them with economic assistance during the time of crisis. It provides tax free payments treated as a refundable tax credit to Americans, giving families the immediate financial support they need.