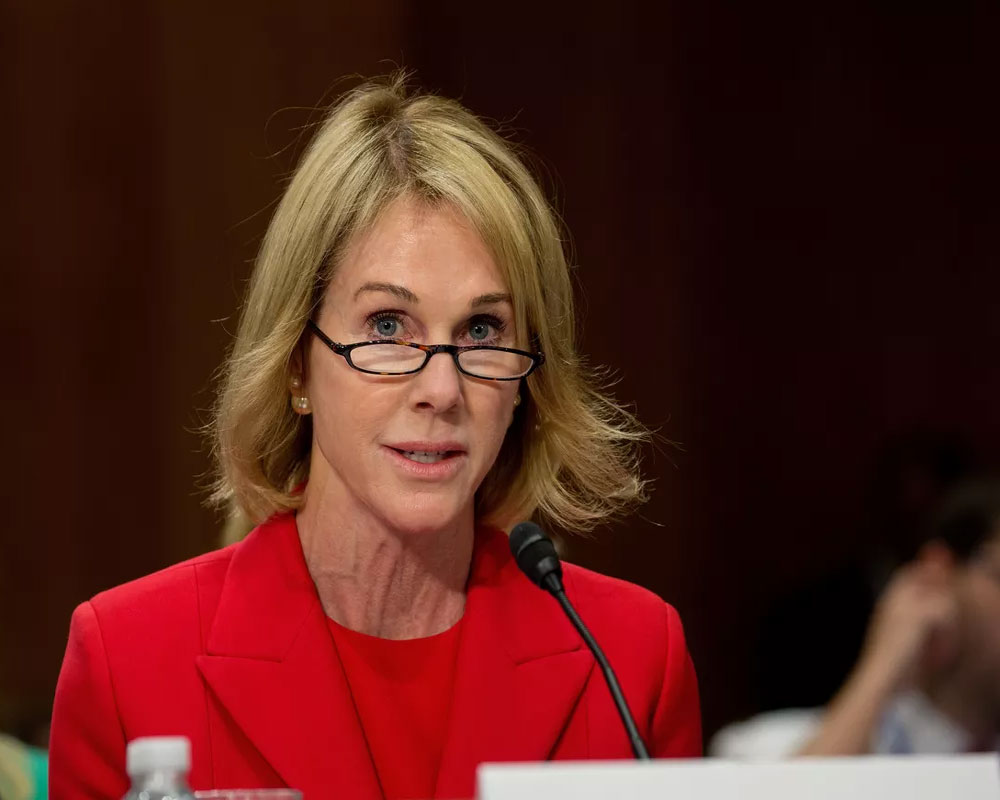 US Ambassador Kelly Craft had lunch with Taiwan's top official in New York, a meeting she called historic and a further step in the Trump administration's campaign to strengthen relations with the self-governing island that China claims as part of its territory.

Craft said her lunch with James K.J. Lee, director of the Taipei Economic and Cultural Office in New York, at an outdoor restaurant on Manhattan's East Side on Wednesday was the first meeting between a top Taiwan official and a United States ambassador to the United Nations.

I'm looking to do the right thing by my president, and I feel that he has sought to strengthen and deepen this bilateral relationship with Taiwan and I want to continue that on behalf of the administration, she told The Associated Press.

The meeting came weeks ahead of the Nov. 3 US presidential election and barely a day before US Undersecretary of State Keith Krach is due to arrive in Taiwan in the highest-level visit by a State Department official to the island in decades. He is expected to meet Taiwan's President Tsai Ing-wen on his visit and participate in an economic dialogue.

The activity is certain to exacerbate mounting tensions between Washington and Beijing over the COVID-19 pandemic, trade, Hong Kong and the South China Sea.

China's UN Ambassador Zhang Jun told AP on Thursday that the Chinese Embassy in Washington is presenting our disagreements about US-Taiwan actions to the Trump administration and here in New York we are also approaching the US Mission to present our protest. He said the meetings violate the one-China policy, three US-China communiques, and a UN General Assembly resolution.

Warmer American relations with democratic Taiwan are largely a result of strong bipartisan support in Congress, but also appear to show how the Trump administration is willing to defy Beijing's threats and promote an alternative to Chinese Communist Party authoritarianism.

The Trump administration is pressing for Taiwan's inclusion as a separate entity in international organizations like the World Health Organization and International Civil Aviation Organization, and is pushing back against Beijing's diplomatic victories over Taipei this year that have included several small countries abandoning diplomatic recognition of Taiwan in favour of China.

Craft said Lee, who was secretary-general in Taiwan's Ministry of Foreign Affairs until July and just arrived in New York, invited her to lunch and she accepted.

It was a nice way for the host country to welcome him to New York and to hear about his family and his experience, and obviously his respect and admiration for the Chinese people as well as the many, many innovations in technology ... that Taiwan has to offer the world.

China has been stepping up its threat to bring the self-governing island under its control by military force with frequent war games and aerial patrols. It claims sovereignty over Taiwan and has been using its diplomatic clout to stop the island from joining any organizations that require statehood for membership.

Taiwan left the United Nations in 1971 when China joined and is excluded from all of its agencies, including the World Health Organization's assembly, where Taiwan's observer status has been stripped. At the same time, it has one of the most robust public health systems in the world, and has won praise for its handling of the coronavirus outbreak.

In May, a tweet from the US Mission to the United Nations, which ambassador Craft retweeted, expressed support for Taiwan's participation in the United Nations, saying the 193-member world organization was founded to serve all voices, welcome a diversity of views and perspectives, and promote human rights.

It said Barring #Taiwan from setting foot on UN grounds is an affront not just to the proud Taiwanese people, but to UN principles.

Craft said the 24 million people in Taiwan need to be heard and they're being marginalized by Beijing.

It really is a shame because they should be able to participate in UN affairs just like everyone else, she said. If the US doesn't stand up to China then who's going to when it comes to Taiwan, and not only Taiwan but Hong Kong and others?

Craft said she and Lee discussed different ways that we can best help Taiwan become more engaged within the U.N. She echoed President Donald Trump in pointing to an email alert sent by Taiwan in December that the WHO ignored, warning about person-to-person transmission of the new virus in China, which indicated that the infection was highly contagious.

Obviously we really are pushing for them to be back into the UN, or have a role in the UN health assembly, Craft said, especially in light of Taiwan's recognition of the danger of human to human transmission of the coronavirus.

Lee called Craft a terrific diplomat and told AP that he is here to engage and being new in town he appreciates meeting people and making friends.