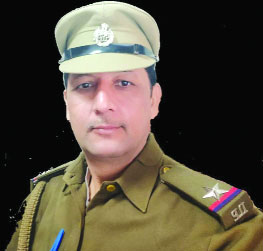 Here are the details of police personnel and their act of courage.

Out of turn promotion

Currently posted at PS Dwarka Sector 23, Constable Rajiv (number 2404/DW) joined Delhi Police in 2010 as a constable and now, has been granted out of turn promotion by CP, Delhi, for showing exemplary courage in rounding up the armed desperate criminals without caring for his life. He retaliated and fired at the criminals despite sustaining serious bullet injuries on his face while falling on the ground. Rajiv had to be admitted in a hospital and is currently under observation in ICU.

The constable was patrolling in the area along with DHG Ajay Kumar on the intervening night of March 16 near L&T construction site in Bharthal village, Sector 26, Dwarka. They received information from the local guard about firing at the construction site and rushed to the spot. However, the assailants had escaped by then. They searched the area for the fleeing assailants and observed some suspicious movements in a plot located at the outer periphery of the area. They entered the premises and questioned those who they were suspicious about. All the four suspected persons had ran away towards different directions. The personnel managed to overpower one of the fleeing suspects and while taking him for further questioning to the PS Dwarka Sector 23, the escaped three assailants returned and opened fire at Rajiv in order to get their associate released from their custody. Rajiv, showing exemplary courage, retaliated against and fired at the assailants despite sustaining serious bullet injury on his face.

Later, the police carried out vigorous investigation and arrested two assailants within 12 hours of the incident and subsequently more other accused were arrested.

Currently posted at DCP office  complaint branch, central district, Daryaganj, ASI Ravindra (number 439/C) joined Delhi Police in 1991 as a constable and now, has been conferred with ‘Asadharan Karya Puraskar’ by CP, Delhi for his exceptionally brave work in nabbing one of the accused in a case by going beyond the call of his duty.

On the evening of March 17, he was on his way back to his residence after finishing his duty, when he reached near B-1/30 Building, Noor-E-Illahi, Anand Sagar Road, that he found three persons scuffling with each other and also heard the sound of firing. Before he could understand the complete situation, he saw one person running with a pistol in his hand. He began chasing him. After doing that for 50 metres, he nabbed him with his pistol. Later, the suspected was identified as Imran from Ziauddinpur, New Musrafabad.

Ravindra, later, handled the situation tactfully and persuaded the group. The accused were handed over to local police of PS Bhajanpura for further investigation.

On March 19, Joginder was deployed on QRT vehicle from 8 am to 8 pm. During patrolling, when he reached at Loknayak Puram, Bakkarwala, he could hear screams of a woman nearby. Later, the woman informed him that two men robbed her gold chain and locket at gun point and ran away. Joginder immediately informed the SHO/Mundka as well as the nearby beat staff and started chasing the accused men. One of the accused opened fire on Joginder, who retaliated the fire with one round in self-defence. During this, both the accused reached the factory area of village Hirankudna and robbed a motorcycle at gun point and fled. Krishan, deployed at Hirankudna Mor, noticed both accused persons reaching the point on the robbed motorcycle. On seeing the police, one of the accused persons opened fired aiming at Vijay. In retaliation, Vijay fired two rounds and caught hold of one of the accused persons while Krishan overpowered the second one. The two were later identified as Dharmender from JJ Colony, Sawada, Delhi and Romil from Jamrud Pur, Greater Kailash I, Delhi.