An ode to India

An ode to India 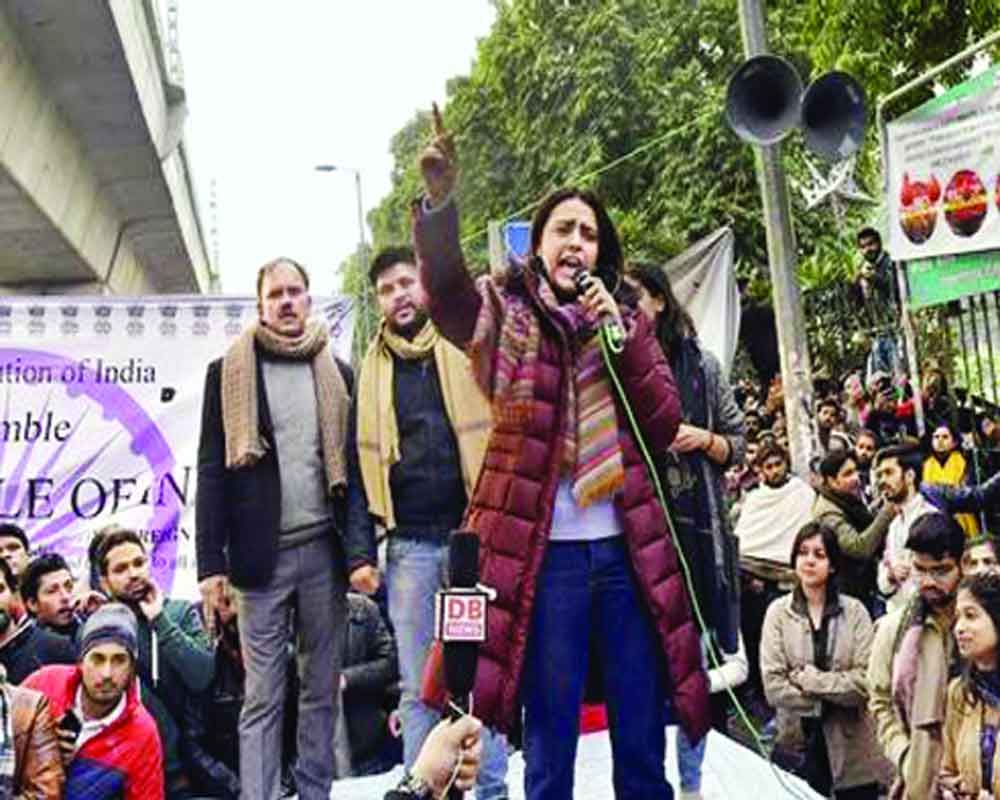 On Valentine’s Day, actor Swara Bhasker appeals to people who don’t subscribe to the hate culture but protest silently against the prevailing injustice because of their love for the nation. At India, My Valentine, a number of artistes will be performing. By Chahak Mittal

Bhagat Singh’s iconic words, “Meri dulhan toh azaadi hai,” hold true even now, decades after his death. His words reflected how his love towards the nation surpassed any other emotion. It pre-empted the idea of romantic love and grew solely for India, which “is meant to be one”.

On Valentine’s Day, actor Swara Bhasker, along with some activists and industry friends have been inspired by the same spirit and celebrate, India, My Valentine, where they look at the nation as one’s love and duty. It celebrates the India of Rabindranath Tagore and Mahatma Gandhi, Jawaharlal Nehru and Maulana Azad, Vallabhai Patel and Khan Abdul Ghaffar Khan, Ashfaqullah Khan and Ram Prasad Bismil, Savitribai Phule and Fatima Sheikh, and BR Ambedkar and Bhagat Singh, bringing the movements back to people’s minds. They honour the India of tolerance, of acceptance, which strove to be a better place for even her most oppressed children and the India that was a dream for many of its freedom fighters.

There have been several voices raised over the last few months in the country against the CAA (Citizenship Amendment Act) and its implied linkage to the NRC (National Register for Citizens). To shut them down and also the massive protests around the country, many lathi-charges have taken place, tear gas has been released, administrations and students of major universities and institutions have been hounded. While today’s youth might be increasingly becoming active in being a part of such debates and protests directly, many choose to stay behind the curtains and present ideas. Swara’s target through this initiative is exactly those people, who “might also not agree with the hate climate but wouldn’t get involved in the harsh messaging too.”

She says, “India’s people are increasingly becoming fractious. They have started behaving more like an echo chamber. Not many people are actually listening to different opinions. And then there’s a set of people who wouldn’t show up at protests but rather would happily go to a cultural event based on the same issue. Which is fine. It doesn’t mean they are not active or apolitical or do not care about the Constitution or its rights or the country falling apart. We thought how could we reach out to this lot of the population that doesn’t subscribe itself to the ideology of hate but also doesn’t want to get into aggressive politics or protests. Hence, we came up with this.”

Social media and a number of written words or posts are evident that there are people who choose to raise voices in a different way than being physically present at a political gathering. “They may feel uncomfortable in attending or listening to political speeches but they would attend some stand-up or music night or be a part of the spoken world through cultural events. This is fine because after all, they’re fighting for India, isn’t it? Whatever our political or religious differences be, we can always find that common link. India se pyaar hai, bohot hai na. Basically, this is to celebrate unity and the fact that at the end of the day, India is our first valentine. Apart from your family, the first thing you learn is to love your country. That is why we pitched it like ‘India, My Valentine’.”

Artistes have been contributing to standing up with the protesters in their respective ways. Be it through films, music, poetry and shayari, art or even being physically present at the protest sites. Prateek Kuhad, Shubha Mudgal and TM Krishna recently performed at the Shaheen Bagh to encourage the women and children to keep their fighting spirits up. Certainly, art does bring something out of the blue, which isn’t aggressive but conveys a point by hitting the right chord. Swara says then why not make the most out of it? “Art has the power to unite because it appeals to our hearts and resonates with our emotions. Even most complex political issues or nuances can be conveyed through an emotional story or a piece of art. The good art teaches us to be empathetic. This will be a fascinating platform for emerging artists as well,” she adds.

With a range of performances across 12-15 Indian cities, the actor says that this will reaffirm the faith of our people in the fraternity and integrity of the country. It will stand for the oppressed. Well, oppression of what kind? She adds, “India’s Constitution, while being constructed, took into account the prevailing inequality and oppression. There are underprivileged children. Our Constitution’s dream was to include them. Today when we talk about disenfranchisement, whether it is by CAA, NRC or healthcare, farmers, sanitation workers, there are so many people who are surrounded by an oppressed culture. A lot of the artistes have also felt the same. This is to rekindle our faith and hope in a Constitution that stood for sovereignty, peace and oneness.”

For her, the idea of love is “fraternity, unity and empathy. You cannot lessen this widening communal divide if you don’t speak the language of love.”

Swara is one actor who has been trolled incessantly for her opinions and statements on social media. And not just trolled, the brunt of being boycotted from work as well as social events, she has faced it all. She says, “Of course, there’s always a price to pay for the choices you make in life. And in mine, somehow it has been physical too, in the form of my work that has been taken away from me. This is in addition to all the hatred, trolling, targetting, negativity and fake news. I have been fighting not just the causes I stand for but all of this. But when we decide to take a position or make a choice, we also decide that we have to live by those choices.”

(The event will take place in Delhi today, followed by different programmes in Mumbai, Kolkata, Punjab, Bangalore, Hyderabad till February 16.)