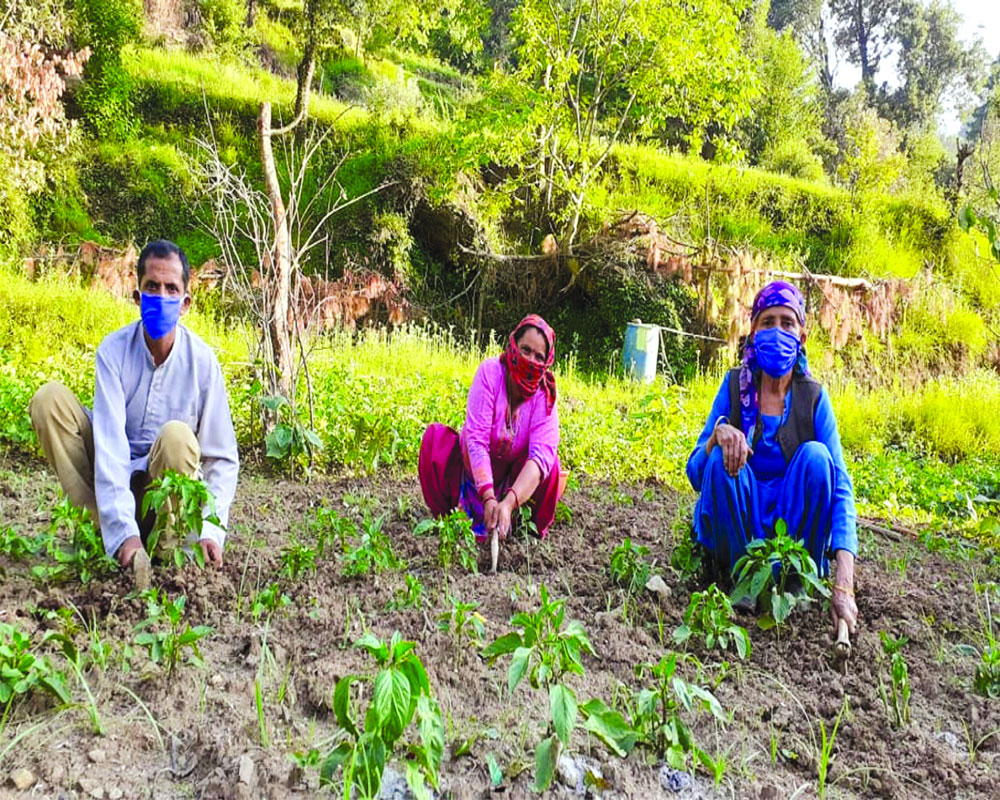 Though Corona has helped the people in Himachal revive their tradition, they are sceptical about the uncertainties that lie ahead, says Sarita Brara

The pandemic has impacted the worldly affairs at different, unfathomable dimensions. The immediate impacts were visible to everyone as both — the people and the governments — were caught off-guard by this novel virus. As months have passed and gaps in our basic infrastructure continue to hit hard the ‘poorest of the poor’, the pandemic is unfolding a world where some are looking at going back to the conventional ways of living closer to the nature while some are not too hopeful of the return.

Remote villages of the hilly Indian state, Himachal Pradesh, are faced with a similar dilemma where on one hand, COVID-19 has forced people to look at more ‘communal’ ways of surviving and on the contrary, has distanced people from one another. In the earlier days, most villages religiously followed a tradition — Buari, which was based on the ‘spirit of cooperation’. Unfortunately, this tradition has been disappearing from the social milieu of the villages until the spread of the virus.

If on a particular day a villager had to harvest the crop, everyone in the village would lend their hand to finish the job. That applied to other farmers as well. Together, they would spend days in the fields cultivating the crop, conversing through traditional folk songs and sharing lunch. The cooperation was not just limited to agriculture field but extended to construction of each other’s houses too. No one hired labourers, as villagers together laid the foundation of an individual’s house. Slowly, people started migrating to towns in search of better career opportunities. This led to transformation in the agriculture traditions wherein they would give their orchards or cultivable fields on contracts or hired migrant workers mostly for harvesting vegetables, fruits and other crops. These migrant workers came from states like UP, Bihar, Jharkhand or the Ghurkhas of Nepal and were mostly hired by apple growers.

Return of Buari in the Post-COVID World

The tradition that was on the verge of getting extinct has made a surprise comeback in the situation arising out of the spread of the virus, feels Layakram of Shill village in the Gram Panchayat Majhiwar of Shimla district.  “As I returned to my village due to the nationwide lockdown, I decided to cultivate part of my land where bushes and wild plants had grown in abundance rendering it uncultivable. Yes, the villagers helped me remove all that unwanted growth and make it cultivable again. Lands lying barren for years are now being tilled by the returnees,” shared Layakram.

Meenakshi, his spouse shared how a time-consuming and labourious task of extracting anardaana from pomegranate was made easier because of the shared workload.  The couple is hopeful that the tradition will help those who have come back to village reconnect with their roots.

The forgotten fruit of physical labour Yashpaul Sharma, however, is skeptical. After having worked as a general manager at a hotel in the not so far tourist town of Shimla, he was forced to return to his native village Allana as the hotels were closed following the lockdown orders. Yashpaul feels that working in agriculture fields even with the cooperation of others is a lot of hard work. His two brothers who were also in the hotel industry in Solan and Chandigarh and were forced to return, shared their sentiments. After losing their lucrative and rather cushy jobs, they are now growing cash-crops on their land. “No doubt we are enjoying the benefits of a joint family with all the members working in the field together and taking responsibility of household chores.  But for how long?” they ask.

For them, there is a feeling of uncertainty about how long the hotel industry will remain shut, whether they will get back their jobs. Moreover, with the spread of virus, they are not even sure that the vegetables they are growing will fetch good prices.

Corona and the mistrust

He says that while it is good to talk about the Buari spirit, the villagers become quite wary if one goes to the market even to buy some basic commodity. “Villagers look at you suspiciously.  There is an environment of fear and doubt with regard to the returnees.” “Yes, this is true,” says Sachin Sharma who was working for a yarn and fabric making unit in Baddi, one of the industrial towns of Himachal Pradesh. In the beginning people were even scared to greet him fearing he may have been infected by the virus.

But unlike Yashpaul, he wants to stay in his village permanently now. “I have come here for good and am not going back to my job. I have learnt all the processes required for yarn, fabric making and marketing of the products,” shared Sachin who is hopeful of establishing a unit in his own village with the help of other returnees.

He seemed well aware of the challenges that this task will face him with, but he is determined of making it one day. Corona has impacted lives of people like Yashpaul, his brothers, Sachin and rest of the Himchali people in a drastic manner. Everyone is thinking of ways to ensure that they take the next steps in the right direction to keep their families safe to which there are no right answers yet.