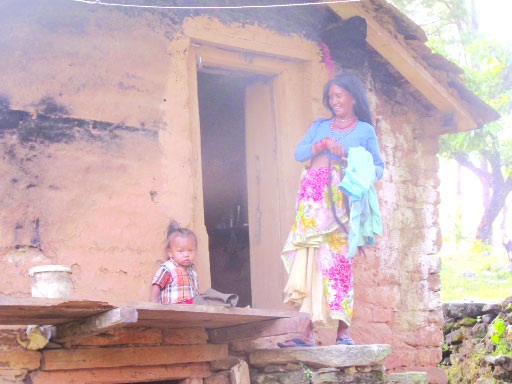 Due to lack of awareness, poor state of education and disconnection from the outside world, Ban Raji, a tribal community, needs special attention, especially its women, says Narendra Singh Bisht

In the sacred forests of Kumaon region, Uttarakhand, resides a tribal community who is considered to be descendants of one of the aboriginal prince of Kumaon. Famous among the ethnographers, the Ban Raji community flaunts a distinguished culture, language and lifestyle, which is closely entwined with mother nature. Ban Raji, which means ‘royal people of the forest’, reflects the closeness and dependency of this tribe on the ecosystem. Over the years, however, the population as well as their culture has undergone drastic transformation and they are slowly moving out of their safe haven into the urban life for survival. Included in the list of 18 most threatened human groups and classified by the Ministry of Tribal Affairs as a Particularly Vulnerable Tribal Group (PVTG), the community needs special attention of the policy makers, especially its women members.

My first acquaintance with the members of the Ban Raji community happened in the year 2008 in the dense forests of Pithoragarh Janpad. The presence of an outsider had created a certain discomfort in the air. After a while, a few men came forward to interact but the women observed from a distance. A member of the community, who was well aware of the life outside the forest, helped establish conversations with the rest of the men. Later, from 2011 to 2016, I worked closely with these handful of families and gained insight into their day to day life, customs, rituals and challenges. The most disturbing has been the lives of women, who with almost negligible interaction with the outside world are enduring a life of distress.

Girls are denied the basic right to education and are given the responsibility of household chores from an early age. They are not allowed to step outside the forest. Of the families met at the time of writing this article, 95 per cent women had received absolutely no education in their entire life. Till date, only four girls from this community have managed to complete their education till class 12 and are currently studying for an undergraduate degree. The status of men’s education is also not very hopeful. In 2001, a residential school was established for the children belonging to this primitive tribe by the state government with assistance from the central government. However, due to unfavourable circumstances, it was closed in the year 2017.

Marrying Girls Before the Age of 18

Due to lack of awareness, high percentage of illiteracy and disconnection from the outside world, the community practices the regressive tradition of marrying girls before the permissible age of 18. Most girls are married between the age of 16 to 18 and become mothers to two to three children before the age of 21. With no knowledge of Sexual and Reproductive Health (SRH), these young mothers continue compromising with their physical and mental health. The non-availability of health centers in close vicinity and due to the lack of monetary assistance, they resort to home-based remedies. Effective for a while, these traditional remedies are unable to save lives and many women die between the age of 35 to 40. Unhealthy mothers and malnourished children receive no attention by the men in the community.

Altering lifestyles and patriarchal mindsets have led to increase in violence against women. Proficient in wooden handicrafts, men work hard to earn meagre amounts only to spend half of it on alcohol. After returning home, they fight with their wives and often indulge into physical violence. Women who are taught to treat their partners like god and never speak against them, they do not even consider such incidences as a violation of their right.

How these tribal women, who cannot read, write and have absolutely no exposure to the outside world, are expected to benefit from the government schemes meant for them? The government’s claim of reaching out to Ban Raji women doesn’t hold water as these women clearly have no access to basic human rights. The schemes announced for the upliftment of women of this tribal community will turn out to be effective only when they will have access and assistance to process such information.

The point being missed here is that this community has spent decades away from the influence of the development process. As the rest of the country moved forward, this community, like many other indigenous groups, chose to stay close to nature. Now, owing to deforestation, urbanisation and migration, these groups are being forced to quit their aboriginal lifestyle and adapt to this new ‘modernised’ way. Women, who have been suppressed for years, are the worst affected in this process. The policy makers are required to understand the cultural ecology of this tribe before designing programmes and schemes for them. A holistic approach is needed along with assistance from non-government institutions to reach out to these women.

Already working in the field, certain non-government organisations are guiding the community to accept and adapt these changes without compromising their traditional values. Learning from their experience and utilising them to plan and implement better policies will certainly support the upliftment of Ban Raji women.