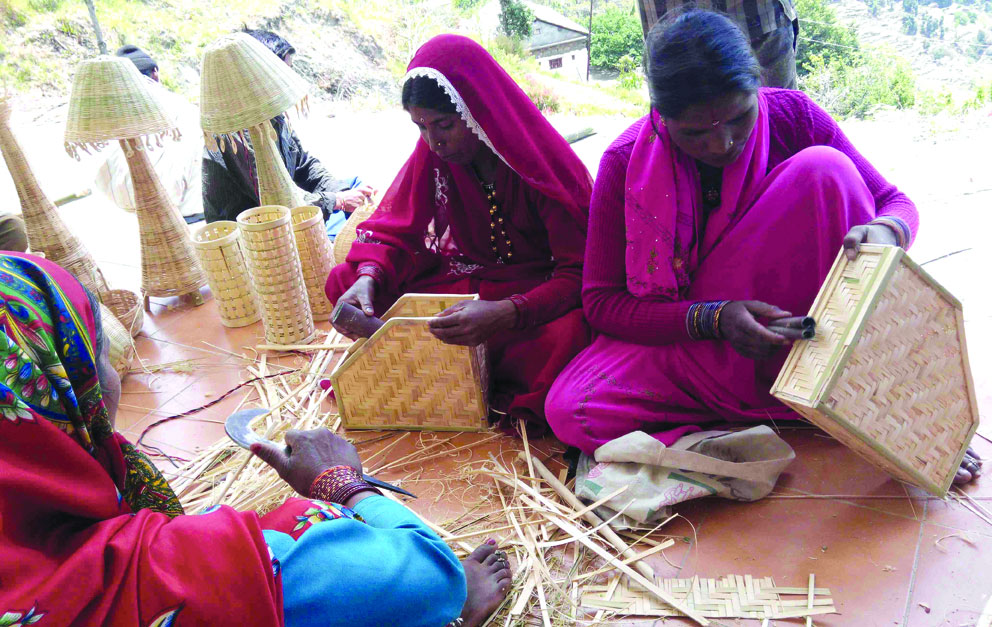 The training provided to Self Help Groups has not only helped members but also the vulnerable sections of society across the country, says Narendra Singh Bisht

According to a recently published World Bank report, “Women Self-Help Groups (SHGs) in India have risen to the extraordinary challenge of COVID-19 pandemic. They are meeting the shortfalls in masks, sanitisers and protective equipment, running community kitchens, fighting misinformation and even providing banking and financial solutions to far-flung communities.” The data from the same report suggests that around 20,000 SHGs across 27 Indian states had produced more than 19 million masks, over 1,00,000 litres of sanitiser and nearly 50,000 litres of hand wash by April 11.

This is not the first time that SHGs have come forward to help the nation in dealing with a disaster. In four decades, they have helped our country survive through droughts, floods, famines, earthquakes and riots. Started with the purpose of promoting financial independence among rural communities, especially among women, and offering them loans on special rates, SHGs have come a long way.

It was in 1980s that the self-help group movement had begun in India when several “NGOs mobilised and organised poor communities in rural areas to provide formal channels for social and financial support.” According to researchers, Misha Sharma and Shreya Chatterjee, “This programme gained momentum with the National Bank for Agriculture and Rural Development (NABARD) linking a small number of groups with banks. Called the Self-Help Group Bank Linkage Programme (SBLP), the revolutionary initiative connected group members — many of whom never had a bank account before — to formal financial services in a sustainable and scalable manner.”

Today, SHGs are at the core of development in rural societies, helping those below poverty line secure loans to sustain their micro and small-scale agriculture and agriculture-allied endeavours. In hilly areas, where earning opportunities are meagre (and even lesser for women), SHGs have become a platform synonymous with financial independence. According to Ministry of Rural Development’s website, of the total 64,53,268 SHGs in the country, 30,802 groups are working in the hill state of Uttarakhand.

They have changed the outlook of women in this state. “Earlier, my family could not afford to fulfill even the simplest of its wishes. Whatever little we earned, was spent on meeting our basic needs. After becoming a member of the SHG, I learnt the art of saving money and that has helped me become financially independent,” shared Parvati Devi, an active member of Parvati Self-Help Group which is active in Toli, a small village.

With over two decades of existence, the SHGs have become more than just a medium for securing loans and savings. Several livelihood schemes are launched by government every financial year to empower women economically — these groups act as delivery mechanism for implementation of such programmes. Their active presence in every village helps both, government and non-government organisations, to reach out to maximum number of women and encourage them to participate in livelihood and skill trainings, community development programmes and much more.

One of the many organisations in Uttarakhand, the Central Himalayan Environment Association (CHEA), Nainital, adopted 33 women SHGs in Almora and Nainital districts in 2018 under its project funded by Department of Science and Technology. With the participation of 345 women, these adopted groups were able to save Rs 4,75,000 under this project. This money was then offered as a loan to its group members to fulfill their urgent household needs. A part of the amount was also borrowed by members for agriculture-related activities. The low-interest rates and smooth process of returning money through EMIs without going to the banks helped villagers pay back their loans on time.

“In the last two years, CHEA has helped us to grow —  right from educating and encouraging us to save money and invest the borrowed amount in livelihood generation activities — and guided us at every step. Attending their group meetings has improved our knowledge about several schemes. We are informed about different government and non-government projects running in our areas and have benefitted from them,” shared Deepa Devi, a member of a SHG group adopted by CHEA.

The SBLP has helped rural communities in Uttarakhand and in other states, especially the women, become financially empowered. Women and men working as small and marginal farmers, farm labourers, artisans have found guidance in these SHGs which promote the concept of mutual support among the communities. Their collective strength becomes even more visible during difficult times such as these when the entire country is fighting the pandemic. It is the SHGs across the country which have come forward to help the most vulnerable sections of their respective societies. This proves that the training provided to them over the years is not only for ‘self-help’ but to serve others in difficult times like the ones we are witnessing.

(This article has been written under Sanjoy Ghose Media Fellowship 2019-20.)