Born free but in chains

Born free but in chains 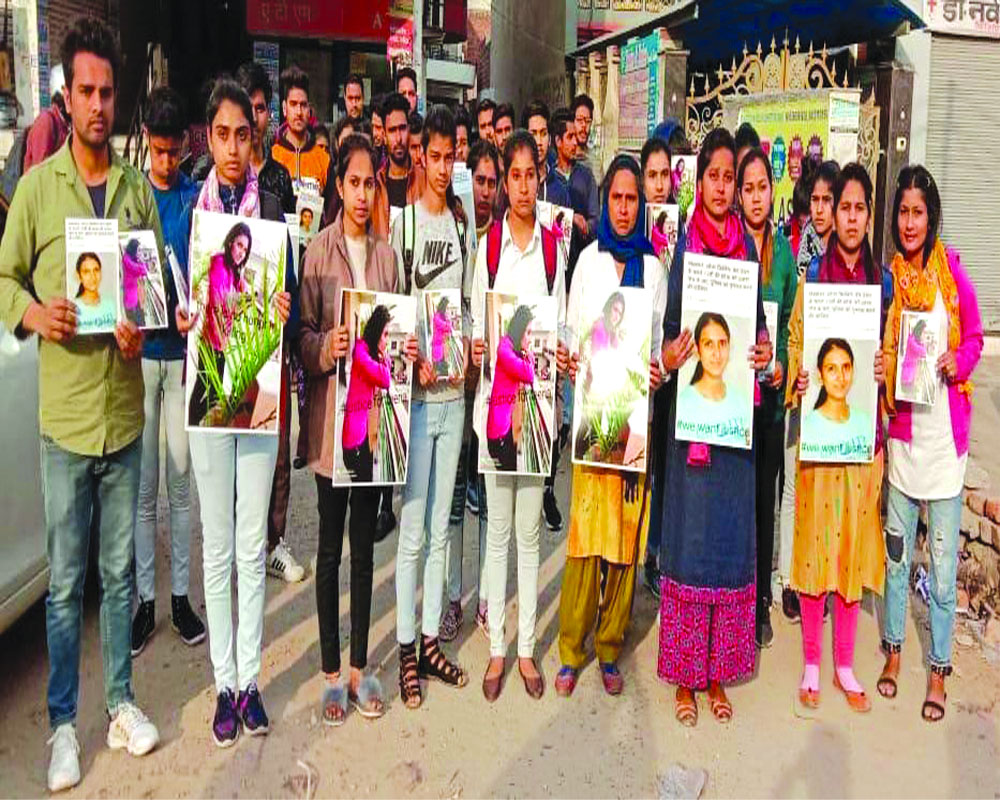 The sun was out, not in its blazing glory but tentatively, as the four men convicted in the 2012 gang-rape and murder of a young paramedical student were hanged on Friday, March 20. The execution received mixed reactions from people of different school of thoughts. Many hailed the decision and celebrated the hanging as a step towards justice while others believed that death penalty doesn’t ensure that crimes against women will decrease.

The national data on crime released by the National Crime Records Bureau (NCRB) in 2019 reports that while the incidence of rape has reduced, the overall crime against women continue to rise. The cases of rapes reduced from 63 per million people in 2016 to 52 per million in 2017. But a total of 3.5 lakh cases of crime against women were registered including murder, rape, dowry death, suicide abetment, acid attack and kidnapping. In these crimes, however, no data was provided for honour killings, which means murdering young couples for marrying outside their caste and community. These crimes attack the concept of love and the idea of women’s autonomy in our country.

With increased awareness, many organisations and people from different strata have started raising their voice against these crimes that find their roots in our patriarchal system. Adding strength to such efforts is the voice of a group of young girls in western Uttar Pradesh, which had reported 16 cases of honour killing in 2016. The idea behind forming this ‘Army’ — as they like to call it is to ensure safety of girls who choose to love.

According to these girls, if a boy marries outside his community, he is often spared by their families but when a girl exercises her freedom to choose her life partner, parents either kill her or her partner and in many cases — both.

The group known as ‘War Against Honour Killing’ was started by Nisha along with her friends in the Kankerkhera area of Meerut city. Nisha, a student who works part time, believes that our society has always discriminated against women who are subjected to inhumane atrocities whenever they demand fair and equal treatment. She questions these atrocities. “Is choosing life partners on their own such a big crime for our society that they prefer murdering their own daughters? The whole purpose behind establishing ‘War Against Honour Killing’ is to ensure that we stop this heinous crime. I lost two of my dear friends to this unjust practice. No one listened to them as their parents murdered them mercilessly. Even the police did not take any action against them. I want to make sure that no other girl is killed. This is a war against all those parents who have murdered girls just for choosing a free life,” shares Nisha.

As expected, when she had started the group, the first resistance had come from her own family. The whole idea of questioning the patriarchal social norms and talking about rights of girls was rejected by her family. “My family is a part of the system and the idea of women being a second-class citizen is so deeply rooted in their lives that they could do anything to stop me from getting down to streets and challenging this patriarchal system,” says Nisha. When they couldn’t stop her, they tried to stop her friends from supporting her.

“Her parents tried to stop us from participating in the initiative. They said that we will get trapped in this mess,” Nisha’s friends share. But gradually the families too came around after seeing the immense courage these young girls showed.

Today, 70 people from different walks of life are a part of this group of which more than 30 are young, fearless girls like Nisha. Besides organising rallies, protests and awareness campaigns, this group has also started utilising the social media platforms to create awareness among masses. The initiative has received a fair share of both criticism and appreciation from different people at different levels. More people are getting associated with the cause. Students from schools, colleges, coaching institutes along with working girls and boys have joined in the efforts.

What Nisha started as a personal fight for justice for her friend has today become a symbol of hope for many young girls in the conservative society.

(This article has been written under the Sanjoy Ghose Media Fellowship 2019.)