Bring back the rare and precious

Bring back the rare and precious 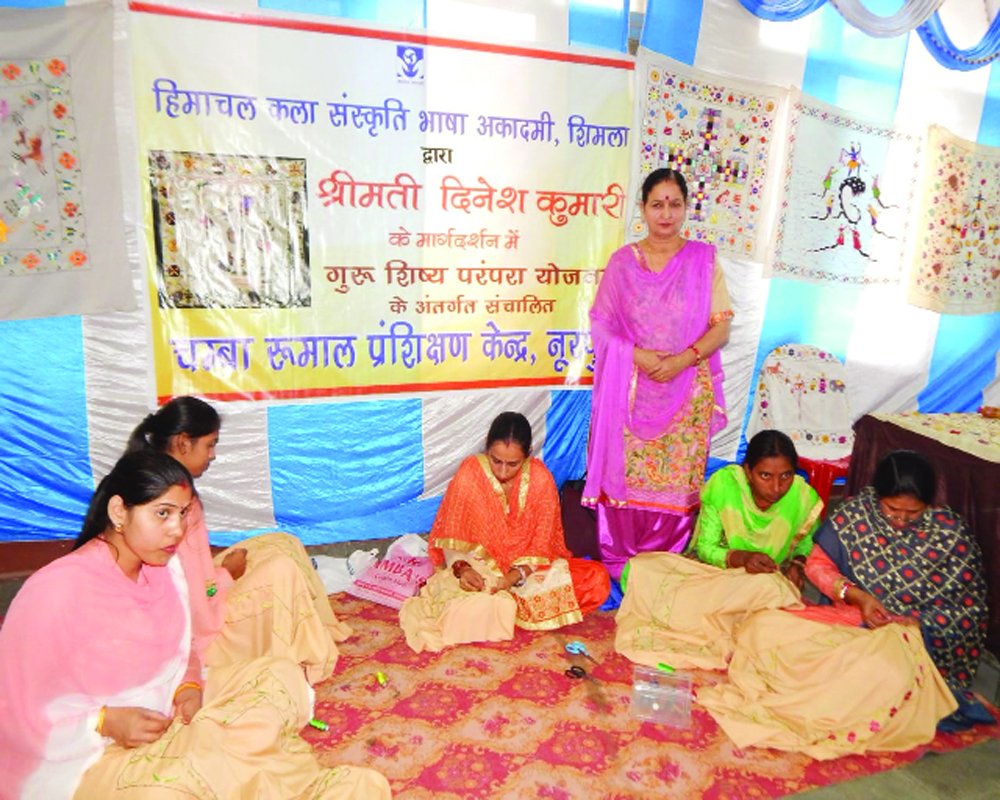 Himachal Pradesh, the scenic Himalayan state in Northern India, is known across the world for its natural beauty, adventurous treks and fascinating cultures and traditions. The state also flaunts a rich heritage that includes a wide variety of arts and crafts that dates back to second century B.C. Over the years, while some of these art and craft forms have flourished, there are some almost on the verge of extinction. For instance, while folk dances like ‘Nati’ have earned international fame, crafts like Pahari miniature paintings, Chamba Rumaal and even some ancient scripts have been struggling hard to stay alive.

It is in this backdrop that an idea was mooted some years ago to revive the dying art and craft forms through the ancient Guru-Shishya Parampara (tradition). The scheme that was launched by Ministry of Culture, Government of India is being executed by the Himachal Academy of Arts, Culture and Languages in this hilly state. The academy identifies the master craftsperson or artists who have been taught these antique art forms by their ancestors.

These identified experts (Gurus) are then presented to a committee that processes, evaluates and recommends their candidature. Each expert is expected to train five to eight shishyas. A small scholarship is also provided to the pupil and an honorarium to the Guru as per the norms fixed by the Ministry.

Ghimber Ram is one of the craftsmen who donned the cap of a Guru in 2018 and nurtured five shishyas. He taught them the art of making traditional musical instruments and masks of gods in brass and Ashtadhatu (eight metals). His ancestors used to make traditional ornaments for women. Ghimber diversified this art and started making masks. His two sons — Vir Singh and Tek Singh, have chosen to take forward this art. In tune with the present-day requirements, they are also sculpting modern pieces besides the traditional art pieces. “I have trained more than 20 young men from my village apart from the five pupils I took under this scheme,” shared Ghimber.

Dinesh Kumari, a retired crafts teacher, was also selected as a Guru by the academy to teach the students the art of embroidery of the famous Chamba Rumaal. It was from her grandmother, Tulsi Devi that she had absorbed this unique style of needle work called dorukha (two way). The patterns and designs look the same from the front and back of the embroidered cloth. “Earlier, during my grandmother’s time, the cloth or fabric on which the embroidery was done were woven by the artists themselves. This art form does not only have unique embroidery style but has distinctive patterns as well.

The designs for embroidery are taken from folklore and mythologies. Ramayana, Mahabharata, Samundra Manthan, the game of Chausar and several such episodes from different mythologies serve as inspiration to artists,” shared Dinesh who sketches these designs herself.

Her commitment to the art form is commendable. Before her retirement, she would often avail special leaves from school to take her work to exhibitions across the country. It was at one such exhibitions that she was approached by the academy to be a part of the initiative after her retirement to which she had happily agreed.

Another craft that is finding it hard to survive is the wood carving for making idols used in wooden temple architecture. Inder Singh had learnt it from his elders, he says. Apart from creating the idols for temples, he has also been involved in wooden carvings for Madhars or the Kothis where the deities stay. From tiny creations to idols as big as four feet, Inder excels in creating marvels from wood. One of his sons is also following the family tradition. Inder says that while under the scheme, he has trained five young men, he has also been teaching this painstaking craft to many young people in his village Jehra in Balichowki tehsil of Mandi district.

Similarly, Dhaniram ‘Khushdil’ has trained several youths in the miniature paintings, a few of them are part of university faculties and have also been assigned the role of a Guru under the scheme. “The Pahari miniature Chitrakala has the impressions of Mughal Shaili or style,” says Dhaniram who is also chosen as a Guru. “The artists of miniature painting were out of work during the rule of Aurangzeb who detested arts and music. These artists went to the mountains in Himachal and Garhwal (now Uttarakhand) where they sustained these artforms. Over the time, their art was influenced by the culture of these regions and gained popularity as Pahari miniature paintings. They received the patronage of the kings of these regions some of whom perhaps were Krishan Bhakts. This is the reason that the Kangra paintings are marked by episodes of Radha-Krishan’s Ras Leela and other life events,” he explained.

Another form of Pahari miniature painting facing survival issues is Mandi Kalam. These miniature paintings had flourished till they received royal support but became vulnerable in the eighteenth century.  This art has also been included for revival under the Guru-Shishya Parampara.

After shifting from the genre of oil painting to miniature painting, Rajesh Kumar was selected as a Guru last year. Other than training the assigned five students under this scheme, he has gone a step ahead and taken the responsibility of teaching 5 more — only women candidates. “These women students are taking a lot of interest but the pandemic has put some constraints. Nevertheless, I am trying to train the students in this art through online platforms. The miniature paintings are drawn with tiny handmade brushes that have to be brought from Rajasthan. Also, the colours used are quite costly,” shared Rajesh while explaining the challenges of the assigned task.

Like Rajesh, other Gurus, especially those involved in miniature paintings feel that one year is too small a time period for teaching these time-consuming art and craft forms. They believe that extending the time frame will help students learn the nuances of these forms effectively. The Director of the academy, Dr Karan Singh says that while this demand can be looked into, there are many other art and craft forms that need to be included in the scheme.

Yet another point all these Gurus made was the need for the state to take measures for marketing these traditional arts and craft products. Considering the annual footfall of tourists in the state, there were suggestions that exhibiting and selling these products at tourist resorts spread across Himachal Pradesh could be a practical solution. After all, an art can only survive if the artists are able to sustain themselves.