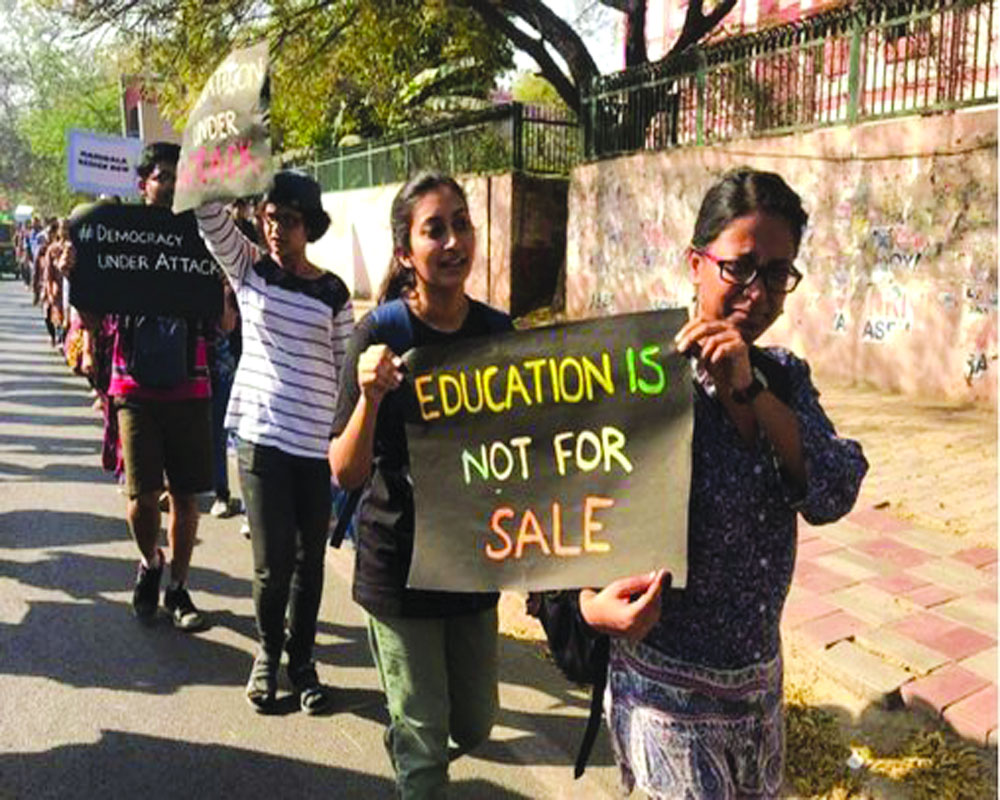 A teenage activist from Palghar, Saloni Todkari uses Gandhian methods to fight for the rights of children and raise social concerns. By Alka Gadgil

The law of love could be best understood and learned through little children,” believed Mahatma Gandhi who always had a special place for children in his heart. His immense belief in children has, undoubtedly, inspired generations and the values he had advocated continue to guide the young minds even today. One such young mind following the teachings of Gandhi is Maharashtra’s 16-year-old Saloni Todkari.

“Non-violence is a successful strategy. It is a tool that we use to fight for our rights such as right to education and right to healthy childhood,” believes Saloni who has been protesting against injustice using Gandhian methods since she was just 12 years old.

Saloni’s journey into “activism” began when she had started attending the Baag Shala (garden school) of Maitrakul — a residential study centre for students run under the aegis of Chhatrashakti Sanstha. Maitrakul is an abode for children from the weaker sections who find it difficult to pursue school education due to challenging circumstances at home. Here, the children study in a local aided school. In 2014, Maitrakul boarding was established by Kishor at Bapgaon, Kalyan in Thane district realising the need for a shelter for the children coming from low-income background such as Saloni’s.  Originally from Virar, a town in Palghar district, Saloni convinced her mother to allow her to relocate to Thane. Her mother Manali Todkari who works as a domestic help understood her daughter’s dream and helped her achieve that.

After moving there, Saloni started attending the local secondary school not very far from the boarding. While she was studying in Class 10th, she learnt that students wanting to appear for the Secondary School Certification (SSC) Board exam directly had to fill the form 17 exam form through a school. Although the charge for the form is `400, the schools were overcharging these adolescents around `4000-5000 per form. When Saloni noticed the exploitation, she raised the issue with the school administration but they dismissed her concerns. Looking at the administration’s response, she and the fellow students decided to peacefully protest against the SSC Board.

“We tried to seek an appointment with the SSC Board officers but to no avail. We wrote several letters but didn’t receive any reply. As our pleas were falling on deaf ears, we staged protests outside the board office. Even after days of protests when the board refused to act, we decided to change our strategy. We created a trophy — an effigy of a beggar with a note pasted on its torso that read: “Since the officers don’t get paid, they have turned to begging” and entered the office. We wanted to present the trophy to the officer but we were whisked away.  Although none of the office bearers met us, the board took cognisance of our grievance and acted on the schools which were overcharging the students for the form,” remembered Saloni.

She also informed about the protocols they had followed while organising the protests. “We had informed the nearest police station about our plans. We went by the regulations and used peaceful methods for making our voices heard,” explained she emphasising on the need of following the constitutional norms while organising peaceful protests.

Known for her understanding, peace-loving and empathetic nature at the boarding, Saloni was entrusted with the responsibility of reaching out to the neighboring Katkari Wadi (Hamlet), under Maitrakul’s Chiranjeevi programme. The Katkaris are an aboriginal forest tribe who continue to live in abject poverty even today. Parents go for work leaving behind young children at home. It was found that schools in and around the area had limitations in meeting their educational needs and almost no Katkari child was enrolled in school.

When Saloni entered the hamlet, she was welcomed with mud and stones, hurled at her by older children. Saloni persisted and tried to broker a truce with the children by proposing to play games. Soon, the children were playing games with her. In a month’s time, she was able to hold an exercise on alphabets with them in the Katkari Wadi. Since then, regular Baag Shala is being organised by Maitrakul activists here.

As she grows older, her grasp on social concerns especially on the challenges faced by the deprived children has also matured. On her way to school, Saloni started noticing the child beggars stalking the walkers on the street for money and food. She felt for the children who have been robbed of their right to live with dignity.

Swayed by the issue, Saloni decided to act by staging a protest outside Kalyan station. Maitrakul backed the decision as she went on to fast for three days against the insensitivity of the administration, police and public regarding child beggars. Her protest and fast against child begging attracted the attention of the administration, media and political leaders. Saloni was just 15 when she launched the agitation and fast for the cause. But how did she cope with the pangs of hunger?

“When I decide, I act. There were friends from Maitrakul who joined my agitation and they took turns to fast for a day with me. When my mother came to see me, she was shocked and broken but didn’t discourage me. She understood that I was doing it for a good cause and gave me her blessings,” shared Saloni.

On the third and the last day of the fast, the local corporators and members of political parties came to meet her and promised to address the child beggars’ issue. The fast was undertaken in the second week of March after which the pandemic had set in. Saloni has not been able to pursue the issue of child beggars since then but she keeps the issue alive by fasting once a month. Other children at Maitrakul also join her for the cause.

‘Saloni is not all agony and anguish, she’s fun loving and easy going. She’s a good actor and a performer. Her coordination skills are great; she plans the schedule, helps in contacting the resource persons and seeks police permission for the camps,” shares Ashish Jadhav, one of the functionaries of Maitrakul.

This adolescent is one of the many young minds who are trying to keep alive the spirit of the father of the nation by walking on the path of Satyagraha and Shanti.