Locked on an island

Locked on an island 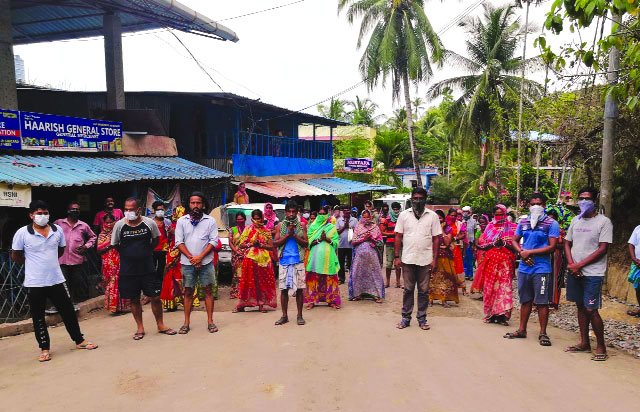 While the labourers on mainland could walk back home, howsoever excruciating the option, the lockdown posed a different kind of challenge to the ones working on the Andaman and Nicobar Island, says Denis Giles

On March 24, the government announced a 21-day nation-wide lockdown in order to combat COVID-19 which was extended thrice subsequently. This unprecedented move left migrant workers across the states suddenly unemployed, creating fear and panic among them. So they started walking towards their villages carrying luggage overhead and children in their arms. According to a World Bank Report, the lockdown impacted the livelihoods of nearly 40 million internal migrants of the country.

Among the affected, there are many who were stuck away from the mainland on the Island of Andaman and Nicobar. A native of 24 Paragana district in the eastern Indian state of West Bengal, Jakir Hussain Pasha alias Rasheed has been working as a daily wage labourer on the island for the last couple of years. The 45-year-old had travelled thousands of miles in search of livelihood opportunities to support a family of three in his hometown. Skilled in masonry, Rasheed was able to earn approximately Rs 1,000 daily, which was enough to support his stay in the island and sustain his family members.

The announcement of the complete lockdown changed his life and also of thousands of other migrant labourers, in the Andaman Islands, who were solely dependent on a daily wage.

The very first week saw migrant workers walking towards their houses, but for the ones like Rasheed, surrounded by the sea all around — even that was not an option.

With bare minimum ration at home, the labourers somehow managed a week without any income. Most of them used diesel for cooking but the closure of petrol pumps in the islands made their condition even more miserable. Helpless and hungry, the labourers were forced to beg. They started venturing out to the nearby colonies with their children and would ask for any help that the residents could provide. Many had tears in their eyes, as this was the first time that instead of work, they were asking for food.“We have never begged in our lives,” said Rasheed in a wavering voice.

It was here that eight young volunteers came to the rescue of migrants and proved to be a blessing for the helpless and hungry. Hundreds lined up with their faces covered, adhering to the government’s instructions of using masks to collect food from them. “The volunteers have come as angels to support us” said labourers with folded hands, adding, “When these youngsters saw us begging, they decided to collect provisions from people and serve cooked food to us. They are continuing to do so twice a day. We have no words to thank them.”

After the report on the situation of migrant labourers was published in newspapers, government officials led by the Member of Parliament of Andaman & Nicobar Islands, Kuldeep Rai Sharma had rushed to the spot to take a stock of the situation. Ration was donated by him while the names and other details of the labourers were collected by the officials. But after the initial support, the ration supply dried up. However, the youth volunteers did not flag and continued to support the stranded workers through individual contributions from the society while the labourers eagerly waited to return home.

After almost a month, on May 1, the Andaman and Nicobar Islands administration announced that they would arrange special ships between Port Blair and Chennai to ferry stranded migrant workers, students, pilgrims and tourists. However, no ships or aircrafts materialised till May 14. While the migrants continue to remain on the islands, there are hundreds of islanders who are stranded in Chennai, Kolkata and other states, since the lockdown, waiting for the Andaman Administration to take a call. There have been several requests made by the public, political leaders, students and migrant workers to arrange for transportation but nothing has materialised as yet. In the name of transportation, only medicines, PPE, few critically ill patients and some dead bodies were the only lucky ones to be transported.

(The author is the editor of Andaman Chronicle.)