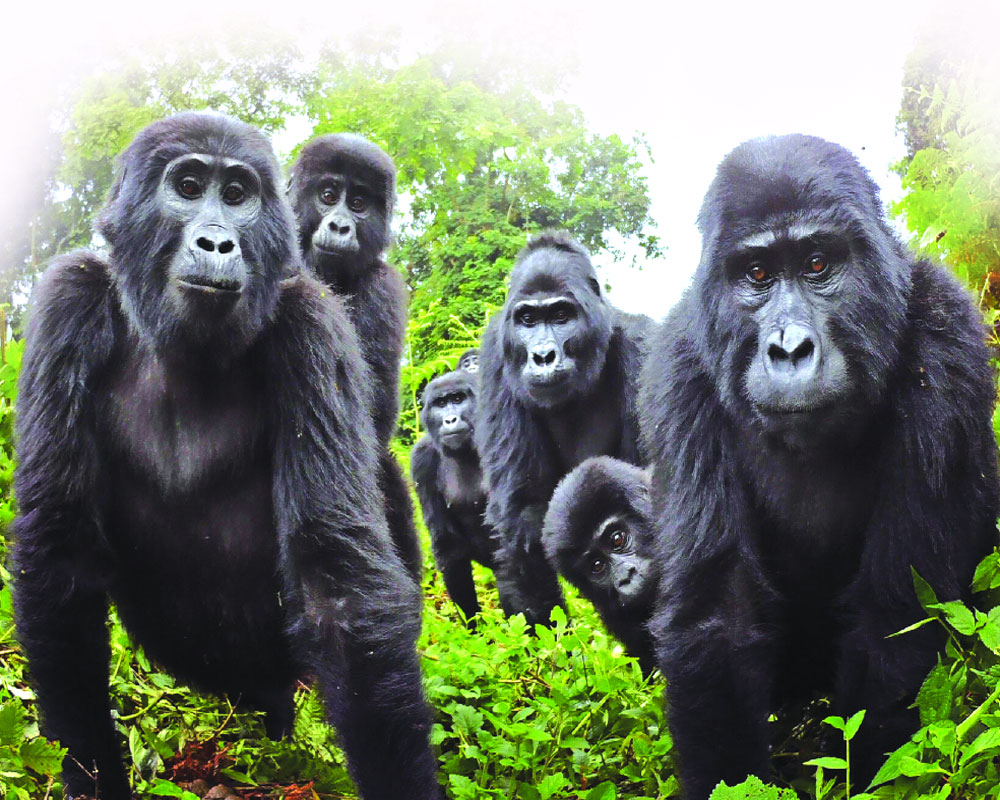 Producers Philip Dalton and Matthew Gordon talk about how their show, Spy In The Wild II, does not just capture animal movement through secret cameras but also their expression, behaviour and thought process. By Team Viva

Why do animals gather for one-off events? What does it feel like to be part of the herd? How do they cope with the changing seasons and climate? What is their ideal pastime activity?

These are a few of the many questions Spy In The Wild II answers. The series presents nature’s greatest dramas and emotional encounters up-close by placing cameras inside revolutionary, lifelike spy creatures in the wild. Producers Philip Dalton and Matthew Gordon talk about how through the series, one can become a part of the gorilla family for a day, discover the drama of koala breeding season, and feel the heat of battle as Komodo dragons race for supremacy. Excerpts:

What went behind making the spy cams? What are its unique features and how long did it take?

Matthew Gordon: Each spy creature takes different time to enter and get captured. On an average, it took about three months. Some of them took most amount of research going back and forth with the scientists and the model makers. For instance, we made primary models for the spy gorilla as it was important to look at the intricate details and their facial expressions. We had animatronic engineers to make sure we get every detail correct.

It was important for the five model creatures that we created to look as realistic as possible. Therefore, we allowed the creatures to behave in a specific way as it might help reveal the behaviours of the real animals too. Also, the facial expressions of animals was more important than their movements. We had to take care of the small detailing depending on the animal we were filming. For instance, when working with the gorillas, we made sure not to stare at them because the silverback gorilla could take that as a threat. So we made sure that our gorilla model was a baby, which is less frightening. Sometimes, it’s also important for the spy creature to smell like the real animal you are filming. For example, we filmed fruit bats in Australia, which are very nervous animals. They use their sense of smell to assess the world around them. Therefore, we had to leave our spy model in the forest for about five days so that it gets the smell.

How much have spy cameras benefitted wildlife filmmaking?

Matthew: The benefits are enormous, more than what was anticipated at that time. Not too long ago, we worked on a series called Penguins: Spy in the Huddle (2014), in which, we worked closely with research scientists, who had proven for the first time that the use of remote cameras was, is better for the animals and less disturbing than humans. His research proved that remote cameras cause minimal disturbance for filming and studying wildlife, which was very interesting because that was the first time it was conclusively shown. This is something we have known all along because we have always found that through spider creatures, we get extraordinary behaviour of the animals. You pick up the nuances of behaviour that you might lose while filming through the long lens.

Philip Dalton: Spy cameras allow us to get right in the heart of the action, back data view and immerse the viewer into the wild world. I think that’s much more captivating but with the new series we found that people might not necessarily be interested in wildlife nature, rather what’s happening there. Spy cameras are a very powerful tool in wildlife filming.

Could you share anything spectacular that was captured on the spy cam?

Matthew: When we were going through all the footages, we found out that the mountain gorillas were singing while eating. It seemed as if they were celebrating their dinner time. I think that was quite a remarkable thing to capture. Thanks to the five cameras!

Philip: There are quite a few examples. We had a Spine Mobula Ray, an extraordinary filming device which allowed us to get into the big shoal of fish. It was able to swim into the heart of it when no diver could. We also had a spy Pelican that was getting some aerial shots. We captured remarkable behaviour called vortex feeding, where creatures that could fly collectively get into some sort of iconic circular motion, and that has never been recorded before in Mobula Rays. It was a remarkable capture.

The other example is of monarch butterflies, which we filmed in Mexico. We had a lovely spy creature based on a hummingbird, specially designed in a way that its moving parts were shielded so that it could fly gently and quietly, very high up into the canopy. It captured the moments of a big cascade, which was when all the butterflies decided to leave together on mass. There were millions of them falling off the trees at the same time. It was an event of magnitude which is quite a rare thing to witness. You can capture small cascades but this scale is very unusual. The shots we got were remarkable as they were from within the middle of the cascades. That for me was a special capture.

Was there any moment of fear or did the animals pick on the spy cams?

Matthew: Whenever we are out on the field, we never know what might happen or how the creatures would react. But generally, the animals seem to be sort of respectful. In the past, when animals like elephants have cited inanimate objects like robot cameras or cameras, they did not like it. They crushed it, thinking that it was a novel item.

But this time, with spy cameras, I think this was a kind of respect to the animals. There was a camera filming the pygmy elephants in Borneo. The elephants came over, looked at it and then, I think, just gave it a fleeting thought. I was still able to carry-on filming and move home. How the elephants looked at the cameras, you’ll be able to see in the first episode of the series. We did get a bit nervous but this time, they accepted their filming and so, it’s going to be a wonderful show.

Which was the most difficult and the most exciting species to spy on?

Philip: We all have our personal favourites in the team. For me, the most exciting and the most challenging were probably the remarkable pack animals in the Arctic walls up in Ellesmere Island. We had put an artificial pup as the spy creature which would sit by the wolf dens, filming the pups. Well, the logistics to get to that part of the world is very complicated and quite expensive.

But we could capture some lovely stuff on the pups around the den. It was difficult to follow them at times, especially when they moved along with their family. It was difficult to follow them as they run so fast, which makes it difficult to move over to the terrain because it’s bumpy and full of rocks. There’s no way we can keep up with them. Fortunately, we had a spy creature that could fly, it is a spy snowy owl. We were able to follow the pack and managed to film them hunting mascots. It was remarkable because we could see the wolf family outside the den for the first time. We could see their first-ever hunts and to film that in detail was just amazing for me, personally too, because it has only been achieved once in the wild before. And that was a long, long time ago.

Another personal favourite, which was equally challenging, was filming the king penguins and elephant seals in the sub-Southern Ocean and on an island called South Georgia. Again, that was a huge operation. It took us nearly 10 days just to get to the location as it was very remote. The weather was extreme with lots of blizzards, cold weather and big, ferocious seas, huge crashing waves. It was a challenge to operate in those conditions and also use our heavy equipment. We placed a spy king penguin and a spy elephant seal, which was the largest spy creature we have ever made. Well, the results were hilarious, so unique. I don’t want to give too much away. Those are my most exciting favourite moments.

Matthew: For me, I’d say that I was the most nervous about the spy gorilla because we never know how that species is going to react. But yes, the spy creatures are made in a very sophisticated way, costing tens of thousands and are deployed at the right moment and place with the help of scientists. But still, there are chances that the gorillas don’t accept the models and just move away from them or destroy them at once.

We have managed to capture some truly magical moments, where we suddenly saw a whole family troupe coming in and staring in with a silver Batman right in the center of the mall and his family around him. They all are just staring at the eye of the spy gorilla. This made me remember the early ‘80s, when Sir David Attenborough was around the mountain gorillas. He had said that there can be more meaning and mutual understanding with a gorilla than any other animal. Well, that for me was really an amazing experience. When you see a whole family of gorillas staring back at you, it’s amazing. It became even better and a magical but real moment when we saw them happy and relaxed, which meant that the family could interact with us and carry on with their natural behaviours. We could capture them playing, beating their chests, running and jumping, eating. The scientists were amazed that they wanted to play with the spy gorilla. We have lovely shots of the back and forth sequence between a young gorilla and our spy, interacting and playing with each other.

Have you visited India? What should the audience here look forward to in the new season?

Matthew: For this series, we did not film in India. We have filmed in India, though, in the past with our first series when we had used the spy Langdon monkey. I remember that the spy monkey had fallen off the tree trunk. We were then not able to operate it anymore. Since it became motionless, the other monkeys had gathered around it and started to perhaps think that it was dead. They started to grieve over the loss of that monkey. That’s when we saw for the first time, how when these creatures lose somebody of their own, they pay their respects and mourn. That’s what they were doing with our spy monkey.

I think this series will have something for everybody irrespective of where it has been shot. The series is not just about the animals’ movements but also about their expressions, body languages, daily routines and thought processes.

(The series airs at 9 pm on Sony BBC Earth from September 21.)