No safety in numbers

No safety in numbers 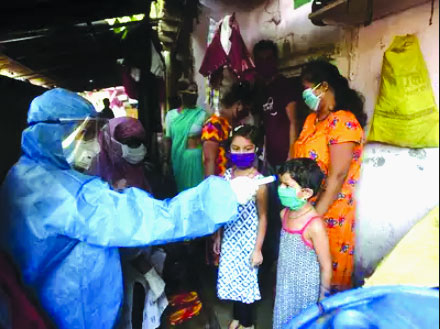 Dharavi, Asia’s largest slum, has an immensely vibrant community. It’s a place where adversity meets optimism. Nearly every household firmly believes in working, recycling and refurbishing. Perhaps, the most distinctive characteristic of this area is the extremely close work-home relationship — every square inch of land is used to produce something. However, this defining feature of Dharavi has made it highly vulnerable to the COVID-19 pandemic.

The Coronavirus has struck Dharavi’s pulsating nerve and poses a threat to its million plus population, their livelihood and survival. The houses bordering its crowded and dark lanes have little or no ventilation and sanitation. It’s, hence, easier to get infected in these cramped localities. Realising the disastrous situation it can lead to, the establishment has put all safeguards in place. The BrihanMumbai Municipal Corporation (BMC) has set up several containment zones with door-to-door delivery of essentials to ‘break the chain’ in the slum.

The rapid spread of the novel Coronavirus has made practices like physical distancing and regular handwashing an integral part of our daily life. However, these measures can be exceptionally difficult to put into practice in densely populated, informal urban settlements like Dharavi. In such places, overcrowding makes the two-metre separation rule almost impossible to uphold. With lack of access to basic services like water and sanitation, how can one expect inhabitants of this slum to regularly wash hands and maintain cleanliness in and around their houses?

“I have been out of work since the outbreak of the virus. This epidemic has pushed thousands workers, daily wage earners and artisans to penury. More than the Coronavirus, it’s the loss of livelihood that is breaking the residents,” shares Mohammad, a tourist guide and resident of Dharavi who fears for his future. Mohammad is not alone. Due to the virus, all activities have been banned in Dharavi, which is ideally touted as the ‘go-to place’ for slum tourism. This unprecedented silence in its crunched lanes has put all the ‘Slumdog’ tourist guides out of work.

A number of non-profit organisations, religious institutions and concerned citizen groups have stepped in to provide food and essentials to people who have lost their livelihood due to the lockdown. “You will not see such efforts as the headline of a newspaper or as the top story of a news channel. The media houses today are only interested in knowing how the other half dies — they are not interested in knowing how the other half lives. The daily ordeals of the citizens are beyond their understanding,” rues Raju Neware, a social worker from Dharavi.

During the 1960s, the area was little known and for the mainstream media it almost didn’t exist. It wasn’t a hot topic that it has become in the recent decades. Even though the mainstream media has mostly depicted the dark side of this otherwise vibrant slum, its inhabitants have always been at the forefront of showing the world its other ‘quaint’ side.

For example, its vast Tamil community has been producing Vanakkam Mumbai — the only weekly, edited and published by the local residents. Contrary to the gruesome stories published about Dharavi in mainstream press, Vanakkam, a mirror of the community, reports on real lives, which are full of challenges as well as good times. Today, due to Coronavirus outbreak, these Tamilians are returning to their native place and the existence of the weekly is at stake. As per a report published in a national daily, “More than 10,000 people from Tamil Nadu, who settled down in Dharavi a few decades ago, are returning in a hurry after the pandemic threatens to overwhelm the sprawling slum with seven lakh residents in an area of just over 2.10 sq km.”

As Dharavi emerges as a new hotspot for Coronavirus in Mumbai, with over 180 cases on April 22 as 12 lives were lost, many other slums of the city are waiting to join in. It is the poor living standards in these slum areas that do not allow its residents to protect themselves from the virus. If they are not safe inside their homes, where can they go?