Sky is not the limit

Sky is not the limit 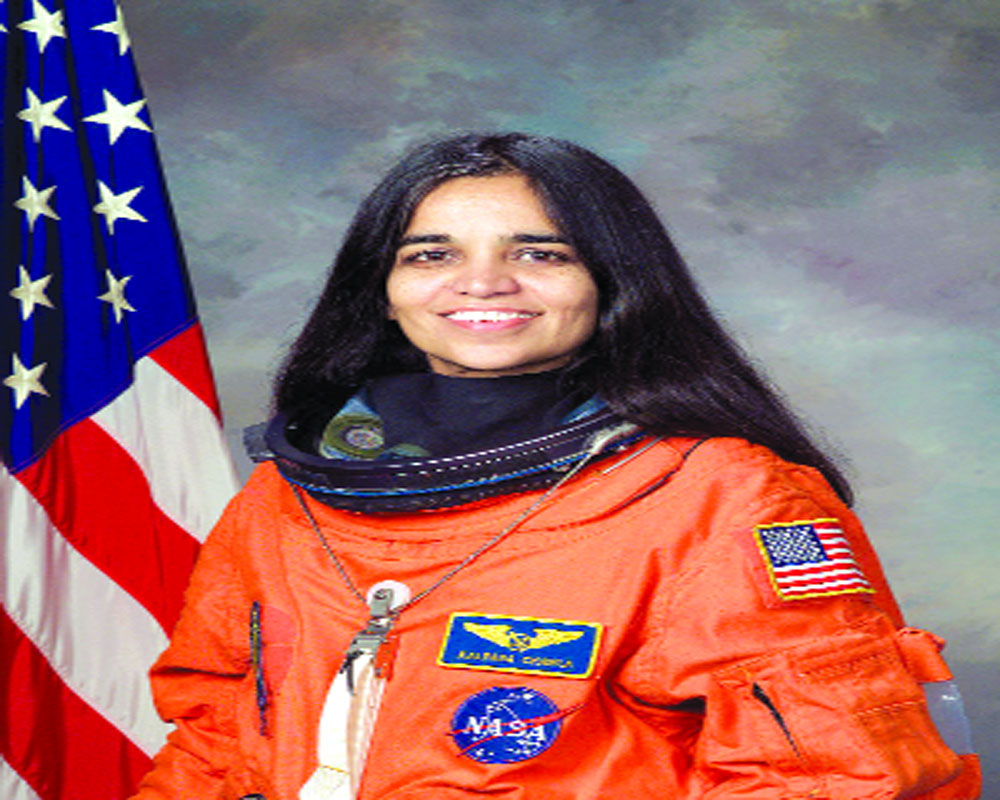 National Geographic’s show, Mega Icons Season 2, explores the journey of astronaut Kalpana Chawla through her father Banarasi Lal Chawla. He tells Sakshi Sharma how her undying curiosity about the sky made her land in space and make some extraordinary life choices

On the other end of the phone, I could sense Chawla’s pride and excitement of Kalpana being featured in National Geographic’s show — Mega Icons Season 2, which dives deep into the journey of some of the India’s icons like Ratan Tata, Deepika Padukone, among others to decipher various milestone moments and life choices that defined their success.

Kalpana’s episode from the series has intimate interviews of her parents, which decode whether it was their conditioning, experiences and hard work or perspective that defined her path. Says he, “I am glad that they have explored my daughter’s journey as it can inspire millions of youth out there trying to make a difference. People should know her teachings.”

Even though the world lost her in a crash during the STS-107 Mission on February 1, 2003, her story continues to inspire and even today make many raise questions out of curiosity. One of them is simply — how did she decide to become an astronaut? “Since childhood, stars and space fascinated Kalpana. She was always curious about landing up in space one day. She always asked us about the position of stars and ‘why they are up there’ but we had no answer to it. Staring consistently towards the sky, she sometimes got emotional too,” recollects Chawla.

It all started when four-year-old Kalpana asked her father, “How do they fly?” pointing towards an aeroplane in the sky. Kalpana asked if he could arrange a plane for her to see. Chawla promised to take her to the flying club in Karnal, just a few kilometres away from their home. He recalls, “As soon as we reached there and she saw a plane, she ran towards it and started asking questions about its operations from the pilot. Her curiousness made them take us for a ride and I can never forget Kalpana’s excitement and expressions when she first sat in it. It occurred to me that moment that her feet were not made for the ground. It was this queer nature that kept her hooked to the world of galaxies.”

As Kalpana’s father went on to share every minute detail of her journey, I realised that the process was not only challenging for her but it was equally difficult for her parents to justify her choices. During her graduation days at the Punjab Engineering College, she was the only woman to pursue Aeronautical Engineering. Says he, “I didn’t know what this course was. I took her for the admission only because she wanted to do that course. There, two of the teachers convinced her not to take that course as it had no scope in India. But she was determined and adamant on her decision.”

Kalpana believed in the power of education. Chawla reminisces how she used to offer mini scholarships every year after she settled in America. Says he, “Annually, she contacted her school in Karnal (Tagore Baal Niketan) and invited two Science toppers to the US. For 15 days, the students would stay with her. She would help them learn and take them to NASA, show around and teach them about it. She believed that education can always help people explore their potential.”

Kalpana certainly had a special place in her heart for all her colleges and schools. She wanted to see her colleagues and students from the college grow and make their own path. While returning from space, on her last mission, just 28 minutes before the crash, she had sent a message for the students of Punjab Engineering College, which read, “Sapno se safalta ki taraf jaane ki raah maujood hai, aap mein usey khojne ki shakti, drishti aur uspe chalne ka saahas hona chahiye.” Her father adds proudly that the University has put up the message in bold letters in its corridors.

The journey of her life was divided equally between India and America. Kalpana believed that the world is one and we are only divided by boundaries but in reality, there’s no one greater or smaller. A journalist from the US once asked her, “How do you feel here, coming from India from a small town like Karnal? And how does this transition feel of being surrounded by big names?” Chawla clears his throat as he reads out Kalpana’s response, “I was not born for a corner of the universe. The whole universe is my native land and the people living on it are my family.” You aren’t great only from your work, but thoughts too. Certainly!

We are all aware of the fact that living in space is not easy. During Kalpana’s tenure, the astronauts had to work for 16 hours and rest for the remaining eight hours. There used to be a wake-up call for every astronaut and a song was played for each one of them. Kalpana’s song choice, Yaar Ko Humne Ja’Baja Dekha by Pakistani Sufi singer Abida Parveen, meant that ‘I found my beloved everywhere.’ Her father chuckles, “But people there couldn’t understand the song and contacted us for the cassette. And then, they used to wake her up with this song!” After a silence of two to three seconds, he asks, “Would you like to listen to the song right now?”

Recalling one incident after another, Chawla almost didn’t give me the chance to get rid of my curiosities about Kalpana. Even before I ask him an anecdote, he is ready with one. Says he, “We were about to visit Kalpana in America. So her elder sister wrote a letter to her asking if she wants anything from India.” With a sigh, he recalls Kalpana’s touching reply, “My sister, my lovely sister, I am glad that you thought of a gift for me. Don’t go to the market to buy any cloth or jewellery for me, instead donate that amount to environment protection and send the photo of the cheque to me. I will put that in my album and show people this precious gift.”

She was certainly a “god’s child.” Chawla feels that not everyone has this extraordinary nature of being a decision maker at a young age. He fondly remembers how she chose her name herself. Says he, “Her aunt took her to get enrolled in a school at Karnal. When the teacher completed all the formalities and asked her name, the aunt said Mantu, which was Kalpana’s pet name. We hadn’t named her officially till then. So three names were shortlised — Jyotsna, Kalpana and Sunaina — to name her. Even before we could decide a name, she promptly answered — Kalpana,” which implies imagination. Well, now the world knows why no other name would have suited her!

Then US President George Bush said at her memorial service, “None of our astronauts travelled a longer path to space than Kalpana Chawla. She left India as a student but she would see the nation of her birth, all of it, from hundreds of miles above!” recalls her father with pride.

(Kalpana Chawla’s episode of the show will premiere on National Geographic on October 11 at 7 pm. It will also be available on Disney+Hotstar VIP.)