Stories of strength and courage

Stories of strength and courage 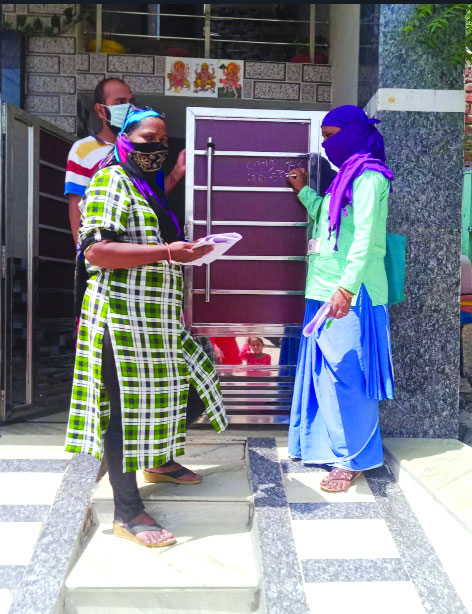 The ASHA workers of Rajasthan have been fighting the deadly virus since its advent. They have been working tirelessly to help the government in its efforts, says Rakhee Roytalukdar

Bhilwara — one of the worst COVID affected districts in Rajasthan, is being lauded for its efforts for containing the spread of virus by employing successful and effective strategies.

As per the health department, over 6,50,000 homes and 24 lakh people were screened ensuring 100 per cent coverage in both urban and rural regions of the district. The credit for the implementation of the strategy is being rightfully given to “Corona Captains,” who were appointed from among SDMs and BDOs and their team of “Corona Fighters” that consisted of four to five members including the panchayat members, teachers and ASHA workers. Of this team, it was the group of 1,66, 600 ASHA workers who have been fighting the deadly virus since its advent into the district. They have been working tirelessly since March to help the government in its efforts. They have been entrusted with the door-to door survey to keep track of ‘High-risk’ patients with Corona symptoms, especially among older persons, those with heart conditions, hypertension, respiratory problems, pregnant women and children of up to 10 years. They also must keep track of those who have come from outside or from containment zones or highly contagious places.

Susheela, one of the ASHA (Accredited Social Health Activist) workers from Dadabari area in textile town in Bhilwara district, was given the task of surveying at least 80 houses for Corona cases in a day. To achieve the target, she would start her day at eight in the morning and work through the scorching heat till late evenings — much beyond the official work hours. “After meeting our targets, there was seldom a day when we got to go home on time. We either had to attend to emergency delivery or had to trace travel history of people returning from outside. Then, we were required to report if that person needed to undergo quarantine or self-isolation. Since Corona, it has become a 24-hour job, we hardly have time to relax,” shared Susheela.

If not for ASHA workers like Susheela, the state government would have found it impossible to do the contact tracing required to zero down a Corona positive patient. Each day these workers surveyed up to 100 houses, entailing a distance of at least six to seven kms, mostly on foot.

According to Shakuntala Sanghi, 62, another ASHA worker in Bhilwara, they are just given a mask and sometimes gloves along with hand sanitisers till date. “We too are at risk and because of it our families have to face physical as well as mental stress.”

To compensate frontline workers, who die in the line of duty, the state government had announced a compensation package of  Rs  50,000 yet when fifty-two-year-old Vimla Devi, a ASHA worker died, she was denied the assistance. Before her death, she was given the duty of watching over a Corona positive patient and she diligently performed the task for 22 days.

While their designated work hours are four, it often stretches for more than eight hours, especially during time of emergency. For long, they have been demanding to be regularised as government employees and are protesting for an increase in salary of up to Rs  18,000, which currently is Rs  2500.

Although, for their dedicated contribution in states efforts to contain the virus, they have been honoured as Corona Fighters but at the same time, they have only been given Rs  1000 as incentive while nurses and police working in the frontline have been given an incentive of  Rs  2500. Are the lives of ASHAs any less important?

However, apart from this, ASHAs are officially categorised as “volunteers”. The key link between rural community and the public health delivery system under the National Rural Health Mission, ASHAs have been entrusted with crucial roles and responsibilities. They counsel pregnant women, record every birth in the village, keep track of antenatal check-ups, immunisation, supplementary nutrition, sanitation, counsel couples for family planning and also make the community aware about government’s various health programmes.