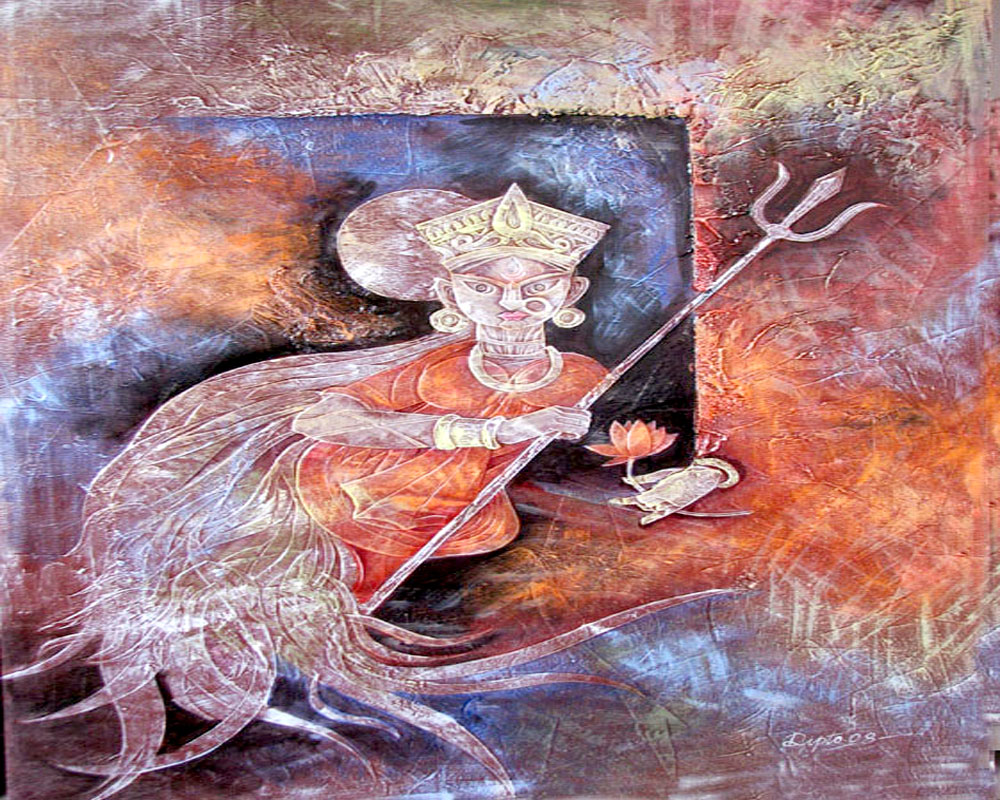 Artist Dipto Narayan Chattopadhyay’s dramatic Durga image captures the decisive moment in the narrative of the deity, who is an eclectic mix of the cosmic and the contemporary. By Uma Nair

Durga, also known as Devi or Shakti, is more than the symbol you see in pandals. This warrior goddess, atop her vahana or a lion, often carrying weapons, is seen as a manifestation of Mahishasuramardini, slayer of the shape-shifting buffalo demon Mahishasura. But there are many identities and emotions that she embodies, making her a complex and enriching version of feminity. It is her many facets that artist Dipto Narayan Chattopdhyay has captured over the years but he discusses four for Vivacity.

Dipto’s first Durga created in 2008 is a hybrid study of Mahishasur Mardini. “I created it in mixed media on board (In my technique layer upon layer colour, wastage paper and waste polythene carry bags),” says the artist. He chose to depart from convention and create a contemporary Durga which he exemplified in  his own expressive, evanescent as well as delicately sculptural style. This image reveals the honesty and the elegant essence of his forms. He uses reductive geometry to maintain purity of form.

His second Durga is again a mixed media on board created in the year 2005. “This painting is in the collection of H.E. Traian Basescu (the former president of Romania),” says Dipto, who gave us a metallic relief flavour as he particularly balanced and beautifully carved her many arms and torso that convey both strength and suppleness. The metallic tint of an alloy itself has a glow to it even now and the carving is executed with the minute detail and fine modelling that are typical of the period. Everything from her jewellery to her finely chiselled eyes is precisely articulated.

Dipto’s third Durga is again a sculptural entity which he calls trash to treasure. “This is an example of art from recycled materials,” he explains. “I use recycled or reused objects to make alluring pieces of contemporary art and design and literally turn everyday trash into creative treasures... during last Navratri and Durga puja one of my demonstrations to my interior designing students was how to turn waste materials into precious art and design. I feel simultaneously they should learn the application of the seven elements of design, which are line, shape, space, value, form, texture and colour.” Durga here is seen standing on the head of the buffalo atop a flower. The figure of the demon is also rather whimsical, with his vivid expression and animated head. It’s rare to come across a sculptural Durga whose image is so lively and in which every element is treated with such skill and attention.

The artist’s last Durga is beauty condensed in contemporary choreography. Durga here is such a small, pretty and fragmentary entity. At one level, we may imagine that he is demonstrating this carefully modelled Durga with an embellished body of colours and contours. It is both  fragile as well as foundational in energy, tone and spiritual fervour. Her face and her ornate dress perfectly capture her renewing prowess. It’s almost as if Durga is in the essence of things. The subject is the articulation of the spiritual glow, the depth of truth that comes from mythic history.