Theatre in the time of pandemic

Theatre in the time of pandemic 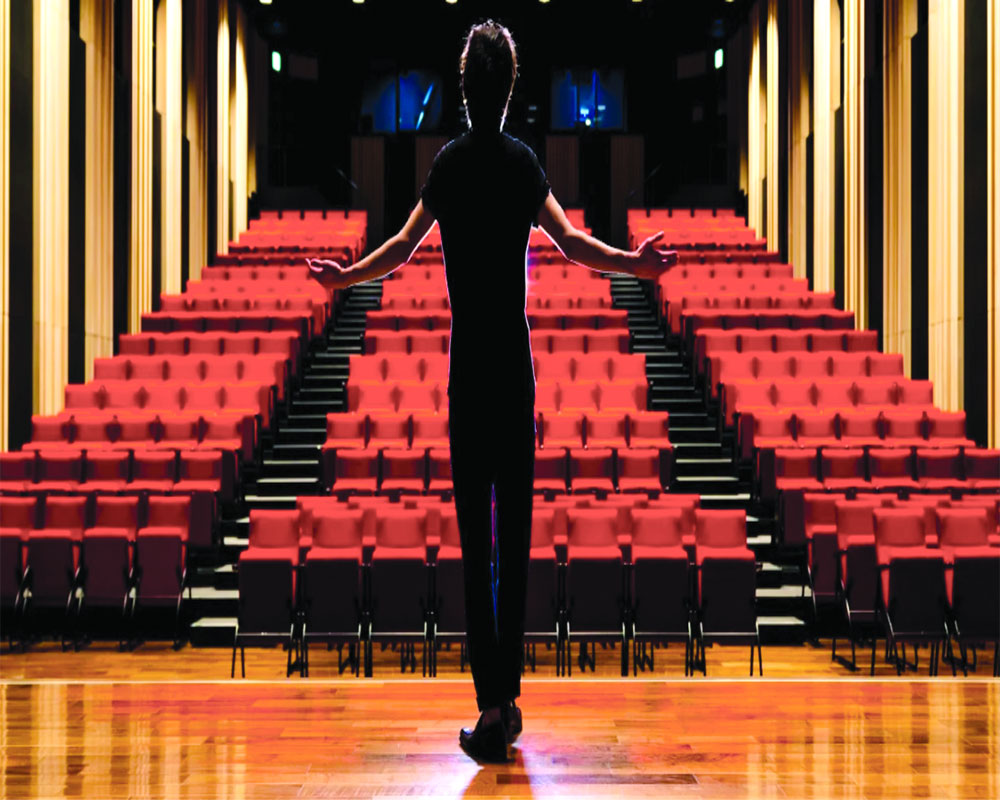 “In the dark times

Will there also be singing?

Yes, there will also be singing.

About the dark times.”

At no other time in living memory do these lines hold as much truth as they do now for art, is but, a reflection of life. Or so they say. And theatre, more than any art form has tried to hold up a mirror to the society. But then, it is also a social medium, where people come and perform while the audience congregates in an auditorium to witness something live as it happens. But in Covidian times of staggered visits, little circles on the floor to ensure social distancing, how would theatre unfold? Would there be masks and sanitisers on stage or will we see plays on the migrant misery?

EFFECTS ON THE ART FORM

Bhanu Bharti, theatre director, playwright and the founder of Aaj Rangmandal theatre group is of the view that the pandemic will affect it positively in a big way. “Modern society was disintegrated and we were becoming self-centered. Ironically, it was social distancing that made us realise the worth of society and the importance of social interaction. Whenever the threat of the pandemic ebbs, people will return to the theatre with a vengeance because they have realised its value.”

However, playwright and director M Sayeed Alam, who leads the Pierrot’s Troupe,  is concerned about the people for whom theatre is a means of sustenance and whom he calls “white collar labourers” as they lack pension and the other perks that come with a job. “Compared to any other industries, we will be more affected. Even if things normalise around January 2021, people would not start coming to theatres before June as they would be afraid of crowds initially.”

Theatre is often the first to tap into any significant occurrence in history whether it is the Partition of the country or wars that we have fought with our neighbours. It is certainly the go-to art form to experience the time in depth.

Shivani Wazir Pasrich, founder of Commonwealth Cultural Forum and director of Study School, says, “Theatre is a reflection of life. It is a way of cataloguing history. It evolves according to the time. The first theatre performance was the dance in a temple, which was a prayer to God, and these evolved over time to be put on stage. So theatre, as it existed, would change according to the times.”

Bharti says that theatre would not step back when documenting the misery that is being witnessed among the migrant labourers during the lockdown.

Alam on the other hand points out that existing plays would have to incorporate changes to reflect the new reality. “One of our most popular comedy, Ghalib in New Delhi will see the poet take rebirth in Corona times and would probably be seen with a mask in the first scene itself,” he says wit889h a laugh. Besides masks becoming a new normal on stage, there could also be change in the script to include no shaking of hands, sitting at a distance and certainly no touching, feels the director.

Papiha Desai, theatre artist, dancer and choreographer who leads the Indian Revival Group, a dance ensemble, says that there could be masks which match the outfits of the actors. The other change that she sees is, “Solo performances taking centre stage for sometime to come. The ones with ensemble cast would pick up slowly after the audience gains confidence and starts coming in.”

Mauraya Sharma, Director, Painting Tongue Productions agrees that masks would be the new accessory and a prop during performances. Foreseeing that these might prove to be a hindrance in delivering dialogues, he says, “We have tools  which can pre record dialogues though, I agree, the seal of authenticity might go from a performance.”

He goes on to add that there could be a new form of theatre where the audience will be the spectacle. “Theatre based organisations in New York are releasing reading materials and performance clips for people to watch at home and take part in. Actors ask questions in a pre-recorded performance and the audience has to respond to it.”

However, Amal Allana, theatre director, scenic and costume designer who was the chairperson of National School of Drama for two consecutive terms  believes that there would be innovation with technology which would lead to a different kinds of performances that might be more exciting. “One can easily use technology, light and music  for creating visuals.”

However she feels that theatre really can’t bring the despair of the people on the roads to life — for a reason. She says, “For me, no play can equate with even one shot of masses of people walking in heat. Should we duplicate it when we can see what is happening so blatantly in front of our eyes? Can it be encapsulated? There are too many questions.”

To put together any production needs at least a month of practice with the ensemble cast and the interactions during it are likely to be affected. Alam says, “It is not like I go on stage one day and use a sanitiser or keep washing hands frequently. We would be rehearsing for days in a smaller space as compared to a theatre. Earlier, a drawing room was enough for the rehearsals. But now the RWA or my neighbours could object to it. We would have to rehearse in park or hire a large space so that social distancing can be maintained.”

For any play to be successful or for that matter just be put together on the stage requires an audience which would applaud the effort and also, fund it. However, the days of packed shows, where two people sitting besides each other were jostling for space on the arm rest, can be considered a scene of yore. Alternate seats to ensure some distance in between two people is an option. However, Alam points out, “The auditorium would have to reduce the rent if we do enforce something like this. If that is not done and we sell 100 tickets instead of 300, we would be incurring a loss unless we are funded by the government or have a sponsor.”

IS ONLINE AN OPTION?

When the lockdown started, many of the popular theatre companies started putting their content online. So one could see Bolshoi Theatre’s Swan Lake or the past performances of National Centre for the Performing Arts (NCPA), Mumbai sitting in the comfort of our homes. Allana says, “Theatre is a lived experience. But given the times, art, dance performances and more can be put online with the help of technology. There are multiple things we can actually do in theatre. Musicals, where musicians are at different locations or even solo performances online are some options that are already being explored.”

Pasrich feels that this time is a tremendous opportunity for theatre to go online. “Be it the actor or the audience, the opportunity lies in curation. It is a tool to be integrated in people’s lives and to further the profession. As an economic activity, we have to reinvent this space. Now is the time to see what will  people do sitting at home. Maybe, you can start online theatre or reading and have fees or contributions for those.”

Desai says that discussions with artistes, performances and more has already moved to the web space and that is the way forward. “Sangeet Natak Akademi is getting senior artistes for discussions as it is evident that there would be no performances for at least a year and a half. Moreover, countries are closing borders, so there wouldn’t be any performances abroad as well. Humankind knows how to innovate and adapt in order to survive and that is the way forward.”

However many feel that, while this option is fine for the time being, it is not viable in the long run. Bharti says, “I see a lot of my friends doing things online and even though it is something very interesting but that is not theatre. Theatre is coming  together for putting up a deeper and more meaningful play.”

Alam too has reservations about the online path which he feels ,“is a poor alternative and won’t survive as there are so many things to watch online. The speciality of an auditorium is that you cannot watch anything else.” He also points out that he made a three-minute film which many people, who love his two-hour plays, found long and lacking in pace. “So, logically how can they watch a two-hour online play?”

REINVENTION: WILL THAT BE THE BYWORD?

Will theatre be born in a new avatar or will the pandemic give it a new direction? The practitioners believe that changes are inevitable. Sharma says, “Theatre has been something very temporary. So the big question is whether it wants to remain transient or record itself?”

Pasrich on the other hand is all for a stepping up of content. She says, “In order to sustain their passion and  homes through the love they have for theatre, artistes would have to come out with exceptional work which usually happens during challenge times and situations. This is the time to write and create and reinvent. We have the tools, which are unbelievable, to do so.” Beyond the economic dimensions, the creator of plays like Draupadi and Tiger says that at home theatre can offer the option to heal. “By means of role play you might be able to react differently to a situation and keep your sanity in these trying times by scripting your response and being in control.”

Allana too feels that the activities around theatre do not have to be centered around just putting a performance on stage. “This is a good time to create archives of theatre, engage in research, write books, discuss plays — all of which theatre needs. It will give us a good time to reflect on the art and see the direction we want to take.”

We all look forward to that.