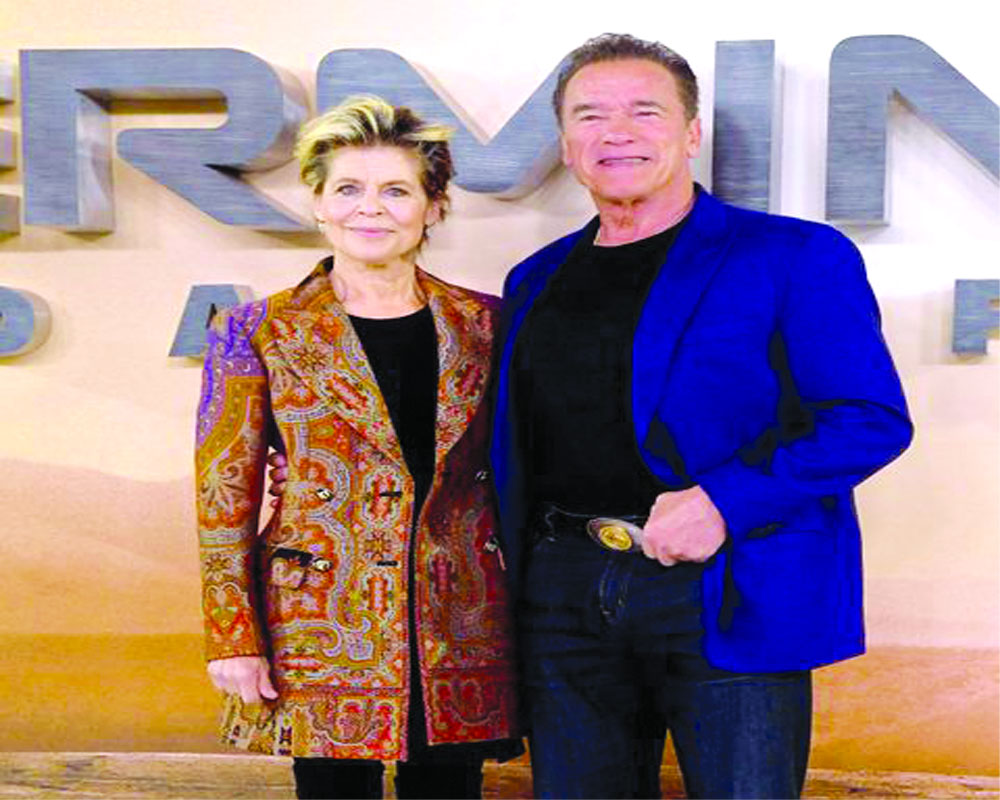 Actors Linda Hamilton and Arnold Schwarzenegger talk about their characters in the action sci-fi, Terminator: Dark Fate, and reuniting after years. By Team Viva

Terminator: Dark Fate is a science fiction action film directed by Tim Miller and produced by James Cameron and David Ellison. It is the sixth installment in the Terminator film franchise and acts as a direct sequel to The Terminator (1984) and Terminator 2: Judgment Day (1991).

The film stars Linda Hamilton and Arnold Schwarzenegger as Sarah Connor and the T-800 Terminator, respectively, reuniting the actors after 23 years, and introduces Mackenzie Davis, Natalia Reyes and Gabriel Luna as new characters. In this interview, Arnold and Linda talk about their character and the feeling of reuniting after so many years.

In these 35 years of life, the electronics have kind of taken over our lives. How foreshadowing is this franchise?

Linda Hamilton: Well, it certainly was ahead of its time back in 1984 when we did the first one and it couldn’t be truer today. So in all these years we have seen it come true and I think it actually speaks more powerfully today than it ever has.

How refreshing is it to come back together after years to inhabit the characters?

Arnold Schwarzenegger: Well, we had such a great time when we worked in the first terminator. Then, in the second one we did a lot of training together, weapon training and stuff like that. We also did training for the acting, the scenes and all. One day James Cameron and I went to a motorcycle ride as we always go and had breakfast. There he sai, ‘what do you think of doing another terminator film?’ I got really excited and asked him about the storyline. And while telling me the story he said that we are going to have Linda back. I said, ‘Oh man that would be great.’ So he told me that he is going to produce it soon and create a story where along with Linda, we all are going to be back. I was delighted about this and it turned out to be a great decision as it ended up being a great film.

“Years ago if you would ask me to run, jump and do some physical exertion I could do it well. But later there would be some things I would have a harder time doing it.” How was it doing some of the actions in the film?

Linda: We used to work day in and day out, I mean there was not a rest day. I used to act and then go home, lay down to rest my body and read 40 books. That way you rest your body, take your mind out elsewhere and then work in a fresh mood the next day.

What really impressed me with this latest incarnation is female empowerment. There has always been that kind of element but this time we see a little spin...

Arnold: Well, thanks to Jim. I have to say this because in all in his films he has female heroes. The key thing is the casting, there are a lot of women who rebel on the screen, I don’t believe it and I don’t buy all of it. But with this one I bought it. When Linda came on this screen in the first terminator and she crushed it, I totally bought in because she became the ant and the leader that she is supposed to be. It got a notch higher in the second one. She created a whole new kind of a character that a female can be a rebel just like a guy and its totally believable. So the pressure is on the other women who want to be the same and want to be called action heroes. They have to be as intense as her as she has set a whole new standard. This also applies to other women who are in this film. She created a standard that’s very hard to match up to and so the other women were all struggling, but they finally did. They all did a great job but Linda is the real hero.

(The film will premiere for the first time on television on Star Movies on October 18 at 12 pm and 9 pm.)