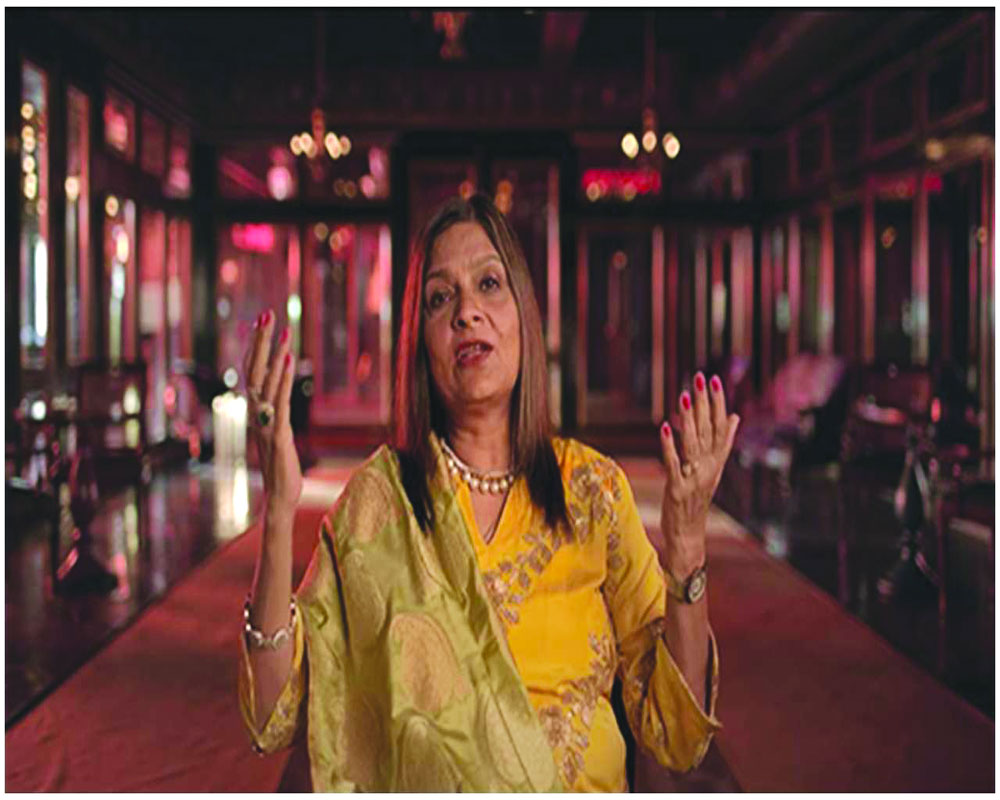 While looking at host Sima Taparia’s approach to arranging marriages in Indian Matchmaking, it’s difficult not to feel a sense of camaraderie as she rightly addresses the desires of the participants about their future partner, says Garima Raghuvanshy

The recent Netflix series, Indian Matchmaking, has taken netizens in India by storm. Perhaps, a good measure of the show’s success is the large number of memes that it has spawned. Not all of that attention has been approving, however. The show has been heavily criticised. There’s been a lot of talk online about how the series captures the worst of Indian culture — colourism, casteism, and patriarchy. There are some who “can’t believe” that a “horrible” institution like arranged marriage is being celebrated through a Netflix original instead of being definitely laid to rest, as it surely should be.

Since I couldn’t connect to most of the arguments online and the condemnations therein to the show itself, I was compelled to ask — did we watch the same show? Sure, the show isn’t perfect. It’s not even brilliant. But neither in the show nor in its contestants could I see any malice or immorality. But then why did some viewers find it deplorable?

For the sake of contrast, and to put my surprise in context, let me share with you my own responses to the show.

Quite simply, I found Indian Matchmaking to be mostly hilarious and sometimes, heartwarming. The stand-out feature of the series was its cast. More than the spicy editing and high-budget production, it’s the people featured in the show that creates the magic. They’re all delightfully strange, and convincingly and compellingly real. This is not the carefully-curated cast of an average reality show. It is a bunch of human beings out and about in all their glorious variety. They are not at all self-conscious or apologetic about their conversations and in stating about what they desire in their future partner or damaad/bahu. Everyone in Indian Matchmaking gave me a plenty of laugh-out-loud moments, some raised eyebrows, and even some collective gapes and gasps. Well, not to forget some silent smiles.

All of the show’s participants are navigating the deep and sometimes not-very-still waters of an arranged marriage. On camera, no less. They’re figuring out what they’re looking for in a partner, what kind of a person would fit beautifully with them, and what they value not just today, but likely, for many years to come. And in the process, they’re figuring out the most about themselves. We even see some of the participants grow as people through the course of eight episodes, losing some of their hardness, loosening some of their knots. It’s difficult not to feel a sense of camaraderie.

My guess is Sima Taparia, the matchmaker in the show, feels it too. She seems to be looking out for her clients and really wants them to be happy. Throughout the eight episodes of the series, Mumbai-based Sima more than a few cartwheels in her attempts to get her clients the happiness that they desire. Impressively, she doesn’t seem to be worried about what her clients will think once the show is aired and they see her plain-spoken descriptions of them. As the show progresses, Sima emerges as a character herself and a supremely relatable one. In several scenes, she reminds me of the older women in my life, many of whom are those no-nonsense, straight-forward aunties, who apparently have joined the many groups that have a ‘gaze’ (I am completely stumped by this term ‘aunty gaze’, which is supposed to be right up there alongside ‘the male gaze’ and the ‘Western gaze’, but that’s a conversation for another time).

In other words, Sima seems to be a part of the real, current world. A big part of that comes from how matter-of-fact she is about her profession. She doesn’t have any judgements about what her clients want in their partners or sons and daughters-in-law. ‘You want a girl from an industrialist family?’ ‘Sure.’ ‘You want someone good looking?’ ‘No problem.’ ‘You want a guy who has his career plan firmly in place?’ ‘Got it.’ ‘You’re looking for someone with a progressive mindset?’ ‘I might not be able to find you that person, but I know someone who can.’

Much like how Sima doesn’t quit in the face of her clients’ demands, viewers haven’t been able to stop watching (or even ‘hate-watching’) her and her clients in action, if Indian Matchmaking’s ranking on Netflix and all the buzz it has created online are an indication. But as we saw, not all of that buzz was the happy kind. So, to return to the questions that set off this article, why did some viewers find the show deplorable? Did we even watch the same show?

I believe a part of the answer really is that we didn’t. A recent tweet against the show was in reference to Sima aunty’s alleged penchant for telling young women that they have to adjust, be flexible and compromise, in order to find a groom. The allegation itself is strange. Because in the show Sima tells almost every one of her clients, including the rich guys, that she is setting them up for someone in India and hence, they will have to adjust accordingly. The netizens bashing the show for celebrating patriarchal mindsets were either unable to see this fact or simply considered what it actually meant as irrelevant. Both of which indicate that most people expressing disgust or dismay aren’t really responding to the show at all. Logically, then, what actually happens doesn’t matter to their responses.

On another note, I am also bewildered at the bad rep that things like ‘adjusting’, ‘flexibility’ and ‘compromise’ seem to have. They are like ‘dirty words.’ It only takes a moment of looking at our own relationships to acknowledge that adjusting, being flexible and compromising could actually be sometimes pretty valuable in any relationship, be it with friends, family, colleagues, and even in those fleeting bonds with co-passengers in a cramped public transport from the pre-COVID days. In the delectable khichdi of human relationships, being adjusting is actually an essential ingredient. Without that, we’d all be individual grains of dal and rice that do not fit into each other’s daily lives. To hammer the point home, are there any mythical creatures, who, even after being in a dream relationship, have not adjusted, been flexible or made space for some compromise? Did the authors of such arguments not look at their own experiences or relationships before giving away such grave denouncement? Or worse still, have they never understood the sweet nothings in a relationship? My mind is boggled.

The idea of mythical creatures in perfect, adjustment, flexibility, and compromise-free relationships, actually brings us to the next part of the answer. A lot of people who found Indian Matchmaking immoral, also have a deep discomfort with the idea of arranged marriages. It is strange when you think about it. As Sima aunty rightly pointed out, in India, we say marriage and love marriage. In other words, arranged marriages are much more common in India than love marriages and this has been the case for the last several decades at least (going by what our grandparents and parents remember and report on the issue). So surely, most of the marriages we see around us are arranged ones. Some of them are unhappy from the beginning, some start off happy and then sour over time, for reasons perhaps unknown even to those couples. Many arranged marriages around us, however, are actually doing quite alright. Some of them are even resounding successes, healthy and happy and deserving of being the #goals. What then explains this strong discomfort with arranged marriages?

For the most part, I think it’s an actual inability to see these marriages for what they actually have been, much like the inability to actually see how Indian Matchmaking transpires in its eight episodes. Most of us are woefully blind to the marriages of our parents, grandparents, friend’s parents, or even our friends, siblings, and cousins. We don’t know what makes these marriages tick, and what works and what doesn’t. We don’t know what makes for a happy marriage nor what breaks one. And perhaps, most regrettable of all, we don’t want to find out. We have either accepted the ridiculous, outlandish ideas of romance and marriage fed to us through films or, conversely, we are passionate defendants of the equally non-existent 50-50 marriages, mythically-free of adjustment and flexibility.

In other words, we are satisfied defending ideological notions of how one ought to find a partner when they “don’t know” them or “love” them. “Why are you going for an arranged marriage, you’re good looking and progressive, you can find someone on your own!” is how it goes. They have no interest in looking at what marriages ought to be like and in observing what happens and often succeeds in practice. This may be our state. Notably, it isn’t where most of the participants of Indian Matchmaking are coming from. Many of them explicitly state, they’ve tried dating and it didn’t work for them. So now they’re looking to try something different. In several responses to the show, this choice, and the process of looking for a partner through matchmakers or arranged marriages, has been labelled everything from un-empowered and regressive to straight-out bigoted. This is astounding. It is also true of most ‘progressive’ responses to the show.

But consider this — if those who have the choice not to (and here I’m not talking only about the participants of the show) choose arranged marriages as the way to find their partner, they must be doing so after having learnt something about the process of dating, and about themselves in it. They must also have observed successful marriages around them, many of which might be arranged. Surely then, when they choose arranged marriages, they are acting from experience and from some kind of knowledge. To explain their choice as bigoted, or worse still, ignorant, betrays a deliberate blindness. Most notably, it demonstrates the expectation for people to root their choices not in knowledge or experience, but in slogans — “How is this progressive?”