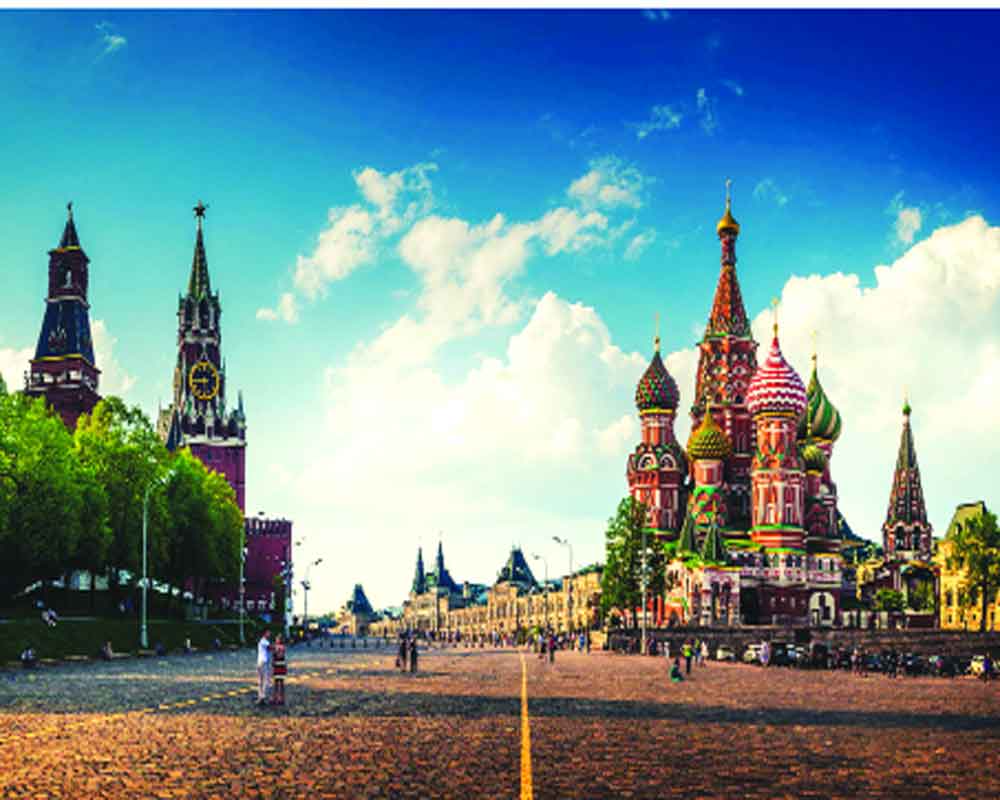 From Golden Mountains of Altai to Lake Baikal, Russian Federation is rich in cultural heritage. The UNESCO World Heritage List includes 28 sites from the country. Here are a few of them

The official name of the holiday is Russia Day (Dien Rossii). It marks the anniversary of the First Congress of People’s Deputies adopting the Declaration of State Sovereignty of the Russian Soviet Federative Socialist Republic (RSFSR) in 1990. On June 12, 1990, when the Soviet Union was on the verge of collapsing, the RSFSR followed other republics by declaring sovereignty and stating that its laws superseded Soviet ones. Thus, the Russian Federation, as we know it now, was born.

In 1994, June 12 was declared a national holiday. Back then, it was called — the day of adoption of the declaration of state sovereignty of RSFSR. In 2002, the official title was changed to — Russia Day — the symbol of national unity and civil peace. Every other street and buildings are decorated with the colours of the national flag on this day, concerts are held throughout the day at various locations (including a big show in the Red Square in Moscow), followed by fireworks at the end of the day. Of course, this time, there will be restrictions due to measures on preventing the COVID-19 dissemination.

Russian Federation is rich in cultural heritage, right from Kaliningrad to Lake Baikal. The UNESCO World Heritage List includes 28 sites located in Russia and almost half of these are ranked as those of outstanding importance.

Here are a few of them:

The Curonian Spit is a natural reserve in the Kaliningrad region, where softwood and greenwood verge with the sandy dunes. Dancing forest is a unique mystery of the Curonian Spit. The pine trunks take unusual twisted shape. Scientists are yet to discover the source of this anomaly. It was included into the UNESCO World Heritage List not as a natural site but as a cultural one.

Saint Petersburg, the former capital of the Russian Empire, glitters with the refined architecture and decor of its imperial palaces. Remarkable are the rooms of the Winter Palace hosting the Hermitage Museum. Inside is a collection of paintings, jewellery and antiquities. Along the Nevsky Prospect, there are historic buildings, parks and churches. Walking in this street, you may feel like inside a novel by Fyodor Dostoyevsky. Other must-see sights include — Kazan Cathedral, Saint Isaac’s Cathedral and the Peter and Paul Fortress. Petergof with its variety of magnificent fountains is worth of particular attention. Saint Petersburg is better to be visited in summer. This is the season of the so-called “white nights” when even after midnight, daylight outside makes you feel like in the midst of day.

In the Republic of Karelia, there is a small island in the Lake Onega, where the unique architectural ensemble of Kizhi Pogost is located. It includes two churches and a bell-tower built in the 18th and 19th centuries. He, who built the 37 metre (121 ft) high Church of the Transfiguration, used just one ax and not a single nail. Upon completion, the woodman was told to throw his ax in the lake so that no one else could create anything of the kind. The Kizhi Pogost is a unique monument of Russian wooden architecture, a universally recognised masterpiece of world architecture.

The Golden Mountains of Altai are located at the border area between Russia and the Central Asia states of Mongolia, China and Kazakhstan. Cliffs, here, verge with scenic highland, azure lakes, rapid rivers, Alpine tundra, grassland meadows and glaciers. The site is also an important habitat for endangered animal species such as the snow leopard. The Golden Mountain region includes the headwaters of Ob’ River, one of the longest rivers in the world, and Lake Teletskoe, the world’s second deepest freshwater body after Lake Baikal. Here you will also find Mount Belukha, Siberia’s highest peak.

The Solovetsky Islands located in the Arkhangelsk region have many architectural sites. These include early man sites, stone labyrinths and grave-mounds. However, the most famous thing about these islands is the monastery with massive boulder walls. During the 1930s, the monastery was used as a prison for political prisoners. Nowadays, it hosts Solovetsky camps and prison museum commemorating political prisoners.

Moscow Kremlin and the Red Square

Kremlin and the Red Square are the heart of Moscow. This is a symbol both for the country and its capital. Moscow Kremlin was founded by Yuri Dolgorukiy in 1147 as a military fortification. For this purpose, he chose Borovitsky Hill on the bank of the Moskva River. Later, the fort became surrounded by a town and the Kremlin itself was used as a residence of the Russian tsars. Now, it is known as the residence of the Russian President. Inside Kremlin, there is Cathedral (or Sobornaya) Square with its amazingly churches.

The Red Square in Moscow is most famous for its May 9 Victory Day Military Parades. Unfortunately, spectators are not allowed to see the parades from the Red Square itself, but you may find yourself a good position in the nearby side streets. Other famous sights of the Red Square are Saint Basil’s Cathedral and Lenin’s Mausoleum (you’d better double check the opening hours in advance). Shopping lovers will be delighted to visit GUM (State Department Store), where there are budget-friendly brands along with the luxury ones. During the warm season, the Red Square hosts open-air concerts with no entrance fees.

The historic centre of Yaroslavl

Yaroslavl, one of the oldest cities in Russia, was founded in 1010 by Prince Yaroslav the Wise. Located at the crossing of the trade routes, Yaroslavl is believed to be the capital of the Russian merchants. Today, in the city centre, one may see a unique architectural ensemble representing almost all architectural styles of the last five centuries. St John the Baptist Church, the gem in the crown of Yaroslavl architecture of the 17th century, is particularly worth seeing. This is a red-brick church with emerald-green domes.

Lake Baikal is the world’s largest and purest freshwater lake located in East Siberia not far away from Irkutsk city. Its maximum depth is 1,642 m (5,387 ft) and the average surface water temperature is 46-48 °F. According to the UNESCO World Heritage Commission, Lake Baikal is sometimes called the ‘Galapagos of Russia’ because of its exceptional biodiversity and importance to evolutionary science. About 80 per cent of the more than 3,700 species found at Lake Baikal are endemic. They are found nowhere else on earth.

Russian Far East is a land of volcanoes, geysers, azure lakes and glaciers. You may see these incredible beauties from a helicopter cabin. Visiting the Valley of Geysers and seeing the Valley of Death (a place of unearthly landscape where no living creature can survive due to high concentration of gases) is only possible by a passenger helicopter. A helicopter tour is available at a price of about RUR 37,000.

There are several regions in Russia that grant foreign nationals entry on the basis of electronic visas. These are the Far Eastern Federal District, the Kaliningrad Oblast, Saint Petersburg and the Leningrad Oblast. These electronic visas are only available to citizens from a specific list of countries compiled by the government of the Russian Federation. That list includes India.

Electronic visas are issued free of charge within four days after the submission of the application. A foreign national entering the Russian Federation on an e-visa may stay in the country for up to eight days from the date of entry within the validity period. E-visas cannot be extended, nor may the period of stay be extended.

To ensure state security and protect public health from the Coronavirus infection in the Russian Federation, the issuance of electronic visas has been suspended.