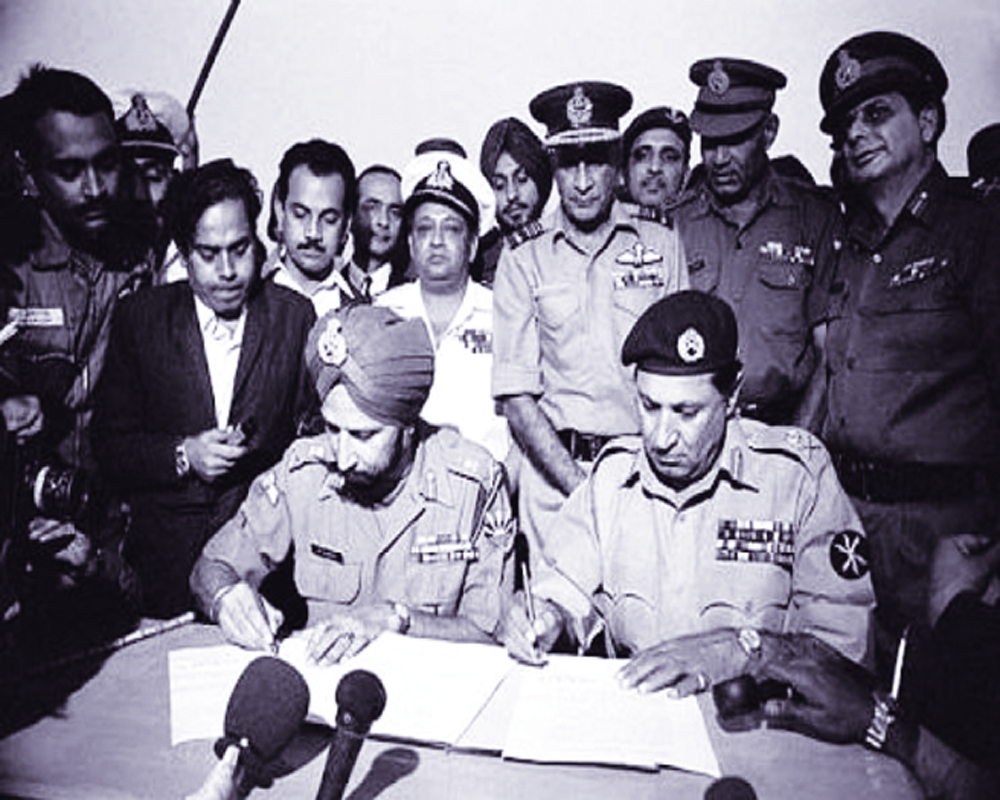 Fifty years of the 1971 India-Pakistan war is being commemorated with great verve and gusto by recalling the geostrategy, tactics and heroics of the great Indian victory — one in 1000 years where the gains on the battlefield were frittered away across the negotiating table. The war corrected the geographical incongruity of Pakistan split into two entities separated by 1000 miles. The late politician and writer, Jaswant Singh, called the victory geography’s revenge over history – when use of force resulted in the birth of a new country Bangladesh, formerly East Pakistan. It was the 20th century’s last decisive war though it could not settle the root cause of India-Pakistan enmity – not J&K but inimical behaviour of the Pakistan Army.

In the previous century, except for the World Wars, there is no clear example of a decisive inter-state war. But intra-state conflicts produced outcomes. The stamping out of Khalistan movement was a rare success for India. So was the Taliban’s first take-over of Afghanistan. Peaceful separation of Czechoslovakia into Czech Republic and Slovakia was a unique event. In the 21st century also, a number of internal conflicts were resolved by use of force – defeat of LTTE in Sri Lanka and the recent re-conquest of Afghanistan by the Taliban. Another genre of military success without the use of military force was ‘fait accompli operations’ like the Russian occupation of Crimea, Chinese seizure of islands in the South China Sea and the Chinese intrusions into East Ladakh. In the space between war and no-peace is grey-zone operations, which is the defender's dilemma. And now, with the advent of cyber war and artificial intelligence, thinkers and practitioners of war and conflict have much to mull over. While the nature and character of war have changed, the principles of war are more or less the same, technology being the consistent key driver of shaping their outcomes .

Past wars and internal conflicts are not replicable. Take the war for Bangladesh. The ten months available for preparation, obtaining air superiority and assistance of Mukti Bahini are some conditions that cannot be recreated. Neither can the political cover provided by USSR through its use of veto which brought India time to ensure the war did not end in cessation of hostilities as Pakistan wished but ended on Indian terms of a full and complete surrender. The talking point of the war was whether Dacca was nominated as the final objective of the war. It is clear from study of various historical accounts that Dacca was initially not the ultimate objective but a less ambitious mission was assigned to the Eastern Army. Improvisation and innovation by both sides played a big part in the war. Maj Gen Nazir Husain Shah, GOC 16 Pakistan Infantry Division and an alumni of Fort Leavenworth USA, used to split a single battalion into two even as portraying a broad front was also practised by Indian forces.

I would like to see during commemoration events greater emphasis on recalling Infantry-led epic battles of Pirgunj, Hilli, Sylhet and Akhaura to name a few. The roadblock at Pirgunj by 2/5 Gorkha Rifles (FF), for example, turned the flank of Pakistan 16 Infantry Division fighting fortress defence at Hilli by crossing the Karatoya river. It was the first turning movement south towards Bogra and Dacca and divided Pakistan’s 16 Infantry Division. Similarly, 4/5 Gorkha Rifles (FF) conducted India’s first heliborne operations and while reduced to half a battalion in combat, took the surrender of two Pakistani Brigades on 15 December, one clear day in advance of the Dacca surrender. They had earlier carried out the first silent ‘khukuri’ attack at Atgram though the British Gurkhas claimed the honour earlier in Indonesia. These short and sharp battles hastened the termination of war confirming Infantry as the queen of battle. It would be more useful to invite officers who took part in these actions rather than have the post-1971 war generation of officers to pontificate on lessons and dialectics of deterrence.

India must cherish the 1971 victory against Pakistan but focus on small-unit actions that will be relevant to future external wars. The limited war in Kargil was another classic demonstration of Infantry-led small unit battles that evicted intruding Pakistani forces across the LoC. It is a pity that war histories on 1962 and IPKF Sri Lanka, though chronicled, have not been released for political reasons. The Indian military’s bad habit of not fully and faithfully recording war diaries has provided opportunity to individual participants in wars to fiddle with and fabricate events to enhance their personal heroics. The media in general and social media in particular, without verifying factuals, have contributed to this.

Biographies and autobiographies are especially culpable as they embellish the record of units and individuals beyond what is recorded in regimental history. And where there is no official regimental history, some writers have gone to town enhancing their stature. All write-ups about past wars must be vetted by MoD historical section and a certification obtained from the authors that they have not used material which is not in official records. The Government has fudged events in East Ladakh, pretending the PLA intrusions have not altered the LAC. Even so, the 1971 success on the battlefield is India’s big redeemer and greatest victory.