A rich creator who died penniless

A rich creator who died penniless 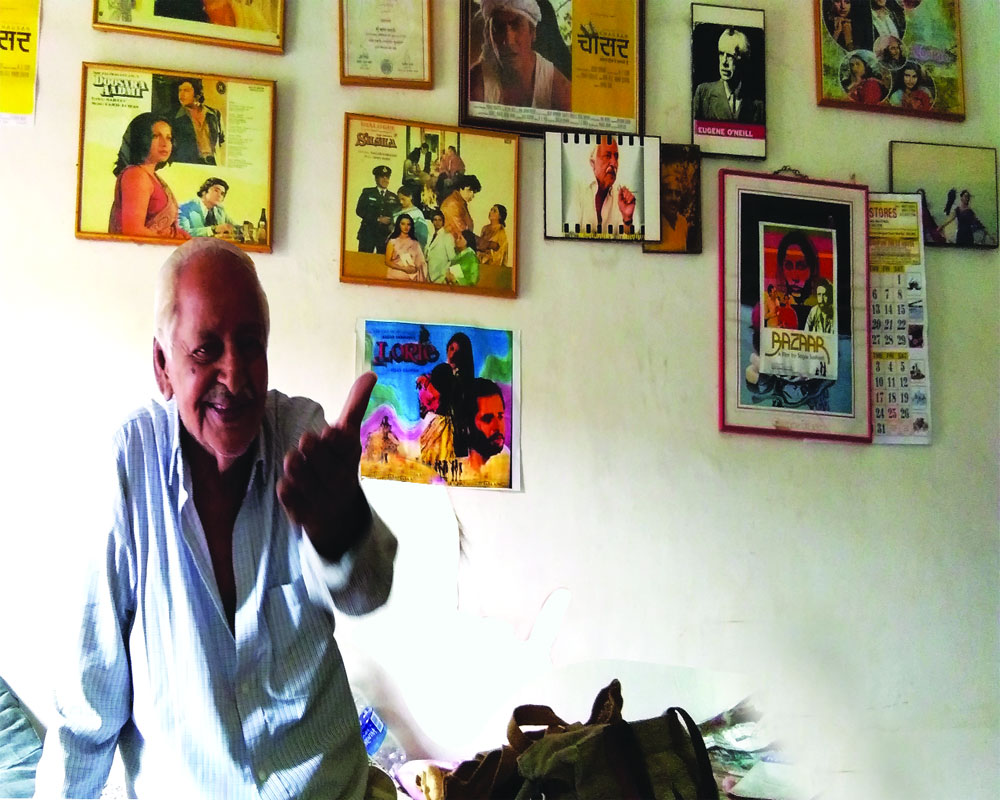 Not the one to flaunt his talent or connections, the popular Hindi cinema writer retained his dignity and ardour even when faced with the odds

No one remembers his real name, Ganga Sagar Talwar, but his nom de plume, Sagar Sarhadi, is a household name in popular Hindi cinema as a story and screenplay writer whose incredible creations Kabhi Kabhie, Silsila, Noorie, Faasle, Anubhav, Zindagi, Chandni, Rang and Kaho Na Pyar Hai, among others, are pieces of gem. And, of course, his immortal creation, Bazaar.

My first interaction with Sagar Saab was in 2005 when he made his last feature film, Chausar. As the festival programmer at the Osian’s-Cinefan Asian Film Festival, my responsibility was to present meaningful cinemas to the festival. To be honest, I was attracted towards Chausar not only for its content but also the name behind it – Sagar Sarhadi. At the time, though old, he was quite active. He brought a VCD of Bazaar for me as a token of affection. Of course, I got him to sign on the cover. What still remains with me is the simplicity of the extremely talented man. No fuss, no celebrity tantrums. An independent film festival curator considers such personalities a precious asset to promote cinematic culture.

After Chausar, we invited him to attend the Jagran Film Festival in Meerut, Uttar Pradesh. At the small hotel we were put up in, his only demand was to have some “good vegetables”. But the waiter insisted on a mixed-vegetable dish. Sagar Sa’ab said: “I came all the way from Bombay, which is a concrete jungle, to your city, which is totally surrounded by greenery. Why can’t you give me some good, green vegetable? Why you emphasising on mixed vegetables that must be seven days old?” Everyone started laughing.

After a long gap, we invited him as a speaker to the Kalinga Literary Festival in Bhubaneswar in 2016. By the time, the veteran had already crossed his 80s and needed an assistant to travel. And, of course, on a simple, low-cost flight. Immediately after reaching to the hotel, he came out and started walking on the street to see the city. Meanwhile, he was telling to his companion: “This Santanu is a big guy. He humbly invited me to attend the literary festival, and I thought it must be a small affair with some like-minded people in a homely atmosphere. But he put me in a five-star hotel, that too air-conditioned. Being a communist at heart, how can I stay here?” That defines Sagar Sarhadi.

In 2017, the Dehradun International Film Festival honoured him with the Lifetime Achievement Award. The award was presented to him by the then Chief Minister Harish Rawat. Before the event, we went to his Mumbai home in Sion to invite him. The small flat with a nice place to sit and brainstorm for projects turned out to be a nice place to recollect beautiful memories.

I saw the Black Lady, the prestigious Filmfare Award trophy, among the various awards on his rack. A huge collection of books, too, mostly written in Urdu. Very sadly, Sagar Sa’ab said: “You know, now I am old. I can’t take good care of these books. I wanted to gift all my Urdu books to the library, but they don’t want these since they say there are no Urdu readers. So the books are lying with me only.”

He used to praise his birthplace, Abbotabad, now in Pakistan, and also in news because of Osama bin Laden. Sagar Sa’ab was so much influenced by the scenic beauty of Abbotabad that the story of Noorie was complete based on that background. The shooting, however, has been done in Kashmir.

The memories of the old good days were always fresh in his mind, though by the time he had become forgetful and repeated the same conversation. But his association with Yash Chopra was known to everyone. From Kabhi Kabhie to Silsila to Chandni, an amazing journey altogether. He recalls that he first went to the south, then to Shimla, Delhi and Punjab. At the end of it, when he submitted the bills to Yash Chopra, the latter jokingly said: “Kya kilometre ke hisaab se likhte ho? (Do you write on the basis of kilometres travelled?)”.

Yash Chopra was keen to make Bazaar, but Sagar Sa’ab was reluctant to pass on the story to anyone. He wanted to make the film by himself. He proudly said: “That time I gave Smita Patil Rs 25,000 as the remuneration and Rs 20,000 to Naseeruddin Shah.” Many people talk about his affection towards Smita but, in our several conversations, honestly, I never found any such thing.

In 2019, at the Kolkata International Film Festival, he was a special invitee to pay tributes to Khayaam Sa’ab. The whole city was covered with the posters and banners of Chief Minister Mamata Banerjee. He innocently asked one of the organisers: “Why is there no film poster but only her face?”

In his last days, after seeing Sagar Saab’s struggle for survival, whenever we invited him, the organiser must offer some monetary assistance to the veteran writer. Since he didn’t ask for money from anyone, I strongly feel, even the super rich Hindi film industry is partly responsible for such neglect as his.

(The writer is a Delhi-based film festival curator, filmmaker and producer. The views expressed are personal.)