A vision for modern India

A vision for modern India 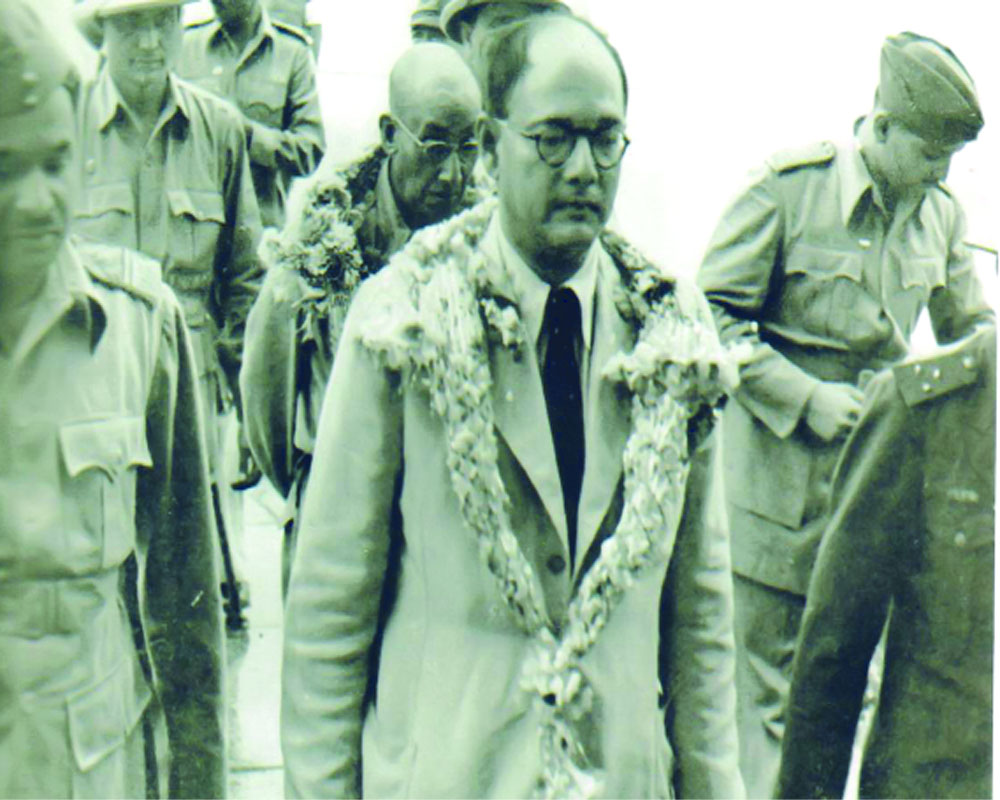 Subhas Chandra Bose aimed for nothing less than the formation of a new and happy India on the basis of the eternal principles of liberty, democracy and socialism

The two figures who dominated the last leg of India’s freedom struggle were Mahatma Gandhi’s favourite soldiers, namely Fabian Socialist acolyte Jawaharlal Nehru and assertive and aggressive Subhas Chandra Bose, a man who admired the Mahatma but despaired at his aims and methods. Bose played a prominent role in India’s political life post-1930. He was twice elected president of the Indian National Congress (INC), the country’s most important political force for freedom from British rule. Both before and during World War-II, Bose worked tirelessly to secure German and Japanese support in freeing India. During the final two years of the war, Bose, with considerable Japanese backing, led the forces of the Indian National Army (INA) into battle against the British. Without a shadow of a doubt, Bose remains one of the key figures in the history of India’s Independence.

True to his character, Bose propounded the fusion ideology of socialism and fascism: In years that followed, he asserted that India must have a political system of an authoritarian character. In India, though, Bose is regarded as a national hero in spite of his praise of autocratic leadership and authoritarian Government, and admiration for European fascist regimes with which he allied himself. Bose was frequently denounced as a fascist, particularly in the wake of the radical, revolutionary (as opposed to reformist) views he expressed in radio addresses broadcast to India from National Socialist Germany and, later, from quasi-fascist Japan. By 1930, Bose had formulated the broad strategy that he believed India must follow to throw off the yoke of British imperialism and assume its rightful place as a leader in Asia. Until his death 15 years later, Bose would continue publicly to praise certain aspects of fascism and express his hope for a synthesis of that ideology and socialism.

However, he was willing to tone down his radical political beliefs on those occasions when he considered it necessary to do so. For example, in his February 1938 inaugural speech as president of the INC, Bose made a sincere attempt to placate the Gandhian faction. A year later he successfully re-contested the presidential election, but two months later was forced to resign because of his differences with Gandhiji and the Gandhian faction. Bose once again proclaimed his belief in the efficacy of authoritarian Government and a synthesis of fascism and socialism. He struggled throughout his life for the independence of India, in his own way.

Along with his abiding love for his country, Bose had an equally passionate hatred for the imperial power that ruled it: Great Britain. In a radio address broadcast from Berlin on March 1, 1943, he exclaimed that Britain’s demise was near and predicted that it would be “India’s privilege to end that Satanic Empire.” Bose was able to give a much grander expression to his “militarism” when, in 1930, he volunteered to form a guard of honour during the ceremonial functions at the Calcutta session of the Congress Party. Gandhiji and several other champions of ahimsa were uncomfortable with this display. A high point in Bose’s “military career” came in July 1943 in Singapore. At a mass meeting there on July 4, Rash Behari Bose (no relation) handed over to him the leadership of the Indian Independence League. This ‘Azad Hind Fauj’ would not only “emancipate India from the British yoke,” he told the soldiers, but would become the standing national army of the liberated nation. Bose clearly admired strong, vigorous, military-type leaders, and in ‘The Indian Struggle’ he listed several whom he particularly respected. These included Hitler, Mussolini and Stalin. Nowhere in this book is there any criticism of these dictators for having too much power, yet another man is chastised for this: Gandhiji. Bose admired Gandhiji for many things, not least his ability to “exploit the mass psychology of the people, just as Lenin did the same thing in Russia, Mussolini in Italy and Hitler in Germany.” But he accused Gandhiji of accepting too much power and responsibility, of becoming a “dictator for the whole country” who issued “decrees” to the Congress. According to Bose, the Mahatma was a brilliant and gifted man but, unlike Mussolini, Hitler and Stalin, a very ineffective leader.

Gandhiji had failed to liberate India because of his frequent indecision and constant willingness to compromise with the Raj (something Bose said he would never do). Bose’s militarism, ambition and leadership traits do not necessarily indicate (contrary to popular opinion) that he was a leader in the fascist mould.

Bose proclaimed, on October 21, 1943, the formation of the Provisional Government of ‘Azad Hind (Free India).’ While retaining his post as Supreme Commander of the INA, he announced that he was naming himself Head of State, Prime Minister and Minister for War and Foreign Affairs. (The most important of these positions — Head of State — he anticipated retaining in a free India.) These appointments involved no democratic process or voting of any kind.

He demanded total obedience and loyalty from the Indians in south Asia and anyone who opposed him, his army or government faced imprisonment, torture, or even execution. Bose aimed for nothing less than the formation of “a new India and a happy India on the basis of the eternal principles of liberty, democracy and socialism.” He rejected communism (at least its Soviet version) because of its internationalism and because he believed that the theoretical ideal found in the writings of Marx could not be applied, without modification, to India. Still, he maintained socialist views throughout his adult life and, on  many occasions, expressed his hope for an egalitarian, industrialised society in which the State would control the basic means of production.

He was opposed to liberalism, believing that greater emphasis should be placed on social goals than on the will of individuals. The wishes of citizens, he reasoned, must be subordinate to the needs of the State, especially during the struggle for Independence and the period of reconstruction immediately following liberation. Nonetheless, having himself been imprisoned 11 times and sent into exile three times, he was committed to upholding the rights of minority intellectual, religious, cultural and racial groups. He hoped for social, economic and political freedom for Indians and would, he said “wage a relentless war against bondage of every kind till the people can become really free.”

Of course, Bose demanded not only the total mobilisation of Indian resources in south Asia but everywhere else, too. He called for mass mobilisation not only in support of his army, but also for his dynamic new government, the various branches of which required financing and manpower. First, his ideology and actions were not the result of any extreme neurotic or pathological psychosocial impulses. He was not a megalomaniac, nor did he display any of the pathological traits often attributed to fascists, such as aggression, obsessive hatred or delusions. Moreover, while he was an ardent patriot and nationalist, Bose’s nationalism was cultural, not racialist. Second, his radical political ideology was shaped by a consuming frustration with the unsuccessful efforts of others to gain independence for India. His “fascist” outlook did not come from a drive for personal power or social elevation. While he was ambitious his obsession was not adulation or power, but rather freedom for his motherland: A goal for which he was willing to suffer and sacrifice, even his life.

Bose was favourably impressed with the discipline and organisational strength of fascism as early as 1930, when he first expressed support for a synthesis of fascism and socialism. During his stays in Europe he was deeply moved by the dynamism of the two major “fascist” powers, Italy and Germany. After observing these regimes first-hand, he developed a political ideology of his own that, he was convinced, could bring about the liberation of India and the total reconstruction of its society along vaguely authoritarian-socialist lines. Bose’s lack of success in liberating India was certainly not due to any lack of effort. From 1921, when he became the first Indian to resign formally from the Indian Civil Service, until his death in 1945 as leader of an Indian government in exile, Bose struggled ceaselessly to achieve freedom and prosperity for his beloved homeland.

In the present context, politics since 2014 has been inspired by Netaji’s brand of politics and the present leadership of the country has genuinely embraced his ideology and political wisdom. The country is more assertive and aggressive though, unfortunately, certain democratic rights are infringed in the process. Though, history will judge the outcome regarding the better option of being Left or Right-wing, but the country voted for Narendra Modi in 2019 to reaffirm the faith in Netaji’s philosophy and vision for a modern and strong India.

(The writer is Editor, Opinion Express, and columnist, The Pioneer. The views expressed are personal.)