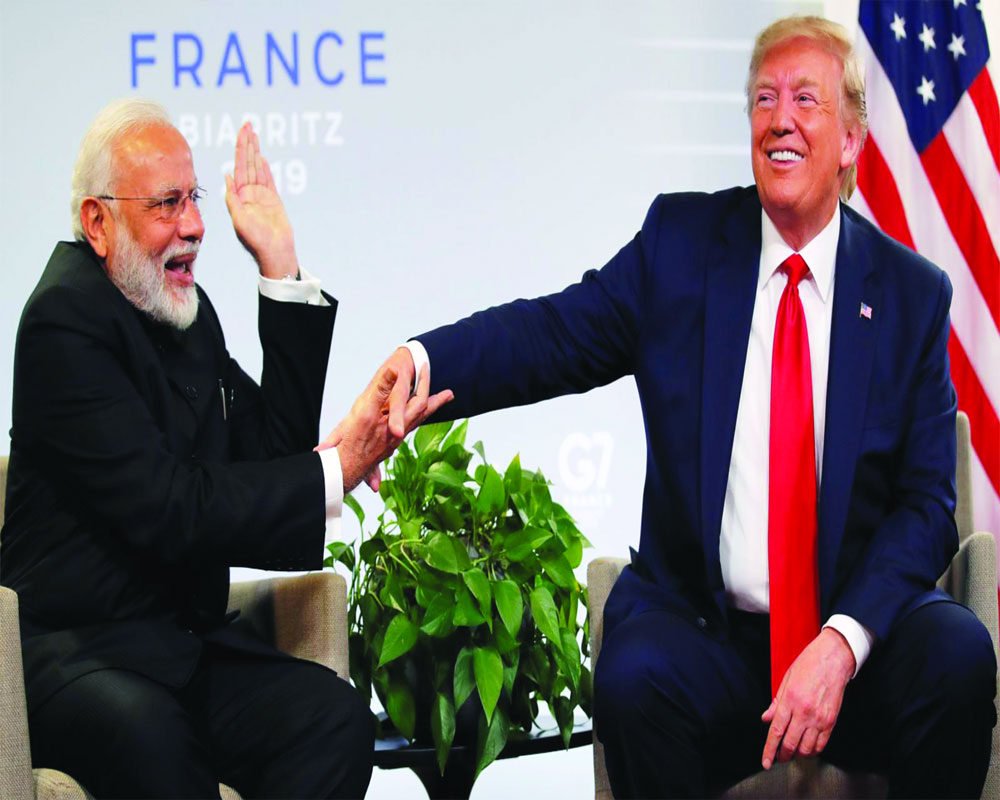 The PM may have distanced himself from Trump following the Capitol attack but we have recently seen many examples of violence in India, too

As a doctor, one of the fundamental things you are taught in the medical college — and, frankly, a lot earlier — is the difference between the symptom and the disease and the importance in tackling the disease rather than just the symptom. A fever, for instance, is a good example of the symptom that is common to a number of illnesses, such as various types of flu as well as different types of infections. However, a paracetamol or Crocin cannot cure such illnesses, though such medicines may prove effective in containing the fever briefly. The ill-informed may be led to believe that the disease is cured but, in reality, the disease is alive and kicking and, without proper care and attention, the symptoms (including the fever) would also return.

In today’s time and age, we are battling and struggling with a disease that has turned our world upside down: A virus that has literally brought the world to a standstill and whose inertia we are still trying to break away from. The COVID-19 crisis has gripped the entire world but afflictions like fake news, propaganda and conspiracy theories that endanger our fundamental understanding of democracy are possibly where the true threat to humanity lies. The most recent example of this harm that these diseases can cause is when violent mobs stormed the Capitol (which is the American equivalent of our Parliament) on the back of calls from outgoing President Donald Trump and other politicians and commentators from the Right wing to stop the transition of power in the United States of America. While Trump and these leaders did attempt to distance themselves from the violence and said that they never intended any violence to take place, it is hard to argue that by stirring emotions and by acting contrary to the fundamental principles of a democracy, the President and his supporters (both in the media and in politics) do not have blood on their hands.

Prime Minister Narendra Modi distanced himself from his good friend, Trump, by tweeting against the attack. However, what should pain Modi more than the unceremonious exit of his dear friend from the office is the fact that India too has, unfortunately, not been immune to the disease of unsubstantiated propaganda, and provoked — or, at the very least, inspired — violence. And after the Emergency of 1975, the most severe impact of these illnesses has been seen in his tenure as the Prime Minister. Therefore, while the attack on the Capitol was shocking, we have seen just as many disturbing examples of violence recently in our very own country.

In the attack on the students of the Jawaharlal Nehru University, for example, we saw a mob enter the campus of a major university and beat up and threaten students and teachers alike. While reports show that there are video clips and reasonable evidence of the prime actors of this violence being from the Akhil Bharatiya Vidyarthi Parishad (ABVP), the Right-wing student organisation affiliated to the Rashtriya Swayamsevak Sangh (RSS), there has been no substantial action against the instigators, including those who are clearly seen on camera.

We have also seen several of the Union Ministers raise a rallying cry on the election trail in New Delhi, raising slogans of “Desh ke gaddaaron ko…”, with the faceless crowd responding with chants of “…goli maaron saalon ko”. Similarly, during the protests against the BJP’s Citizenship Amendment Act, we had another shocking incident where a man fired at least two shots from a distance of 50 metres from the stage of the protest. In a video captured by eyewitnesses, the man can be seen brandishing his gun and shouting: “Hamaare desh mein kisi ki nahi chalegi, sirf Hinduon ki chalegi (No one except Hindus will have their way in our country).” The man was subsequently identified as Kapil Gurjar and this same man was a few months later inducted into the BJP at a public function. At the ceremony, which took place in Ghaziabad, the district convener of the BJP inducted him into the party with the words: “Kapil Gurjar has joined with hundreds of supporters. He has influence and support base in the area. He has been impressed by the party’s policies, the work being done by Prime Minister Narendra Modi ji and UP Chief Minister Yogi Adityanath ji.” While one does not expect such honesty from politicians, the BJP at least removed him from the party and cancelled his membership in the face of the serious backlash that followed.

Similarly, in a shocking case of mob violence in Bulandshahr, a police inspector, SK Singh, was shot and killed by a violent mob over an alleged incident of cow slaughter. According to reports, those named in the charge sheet for Singh’s murder include Bajrang Dal’s local convener Yogesh Raj and the BJP’s youth wing leader Shikhar Agarwal. Other than this, we also saw the horrific abuse of power in Hathras where the UP Police claimed that there was no evidence of rape but the Central Bureau of Investigation (CBI) has subsequently filed a charge sheet against four men accused of the gang rape and murder of a 19-year-old Dalit woman.

The above instances are horrific examples of violence and show a clear disregard for the fundamental principles of an effective democracy. However, these acts of violence and disorder only catch our attention when they reach a terrifying crescendo. Much like how the mob in the United States (US), after being fed hours and hours of lies and fake news, was convinced that they were participating in an act of legitimate defiance; so have we too seen mobs in India that are fed streams of fake news and falsehoods through social media and through “legitimate” news outlets till the point that they are stirred into a violent frenzy. It is here where the BJP and the Prime Minister have been found woefully wanting. While the Prime Minister may not himself be making such inflammatory statements, his acceptance and silence around the conduct of those he has direct control over and those who regularly engage in such malpractices speaks volumes. While Modi has tried to distance himself from Trump and his horrific legacy, he has much to do to address and fix his party’s own legacy in the country. In the words of Voltaire, “Those who can make you believe absurdities, can make you commit atrocities”, and by allowing such people to face no consequence for their action, Modi is leaving his own legacy which has just as many black marks as the man who called him “a great friend”.

(The author is a former IPS officer and member of the Congress party. The views expressed are personal.)