Armenian genocide: A question of nomenclature

Armenian genocide: A question of nomenclature 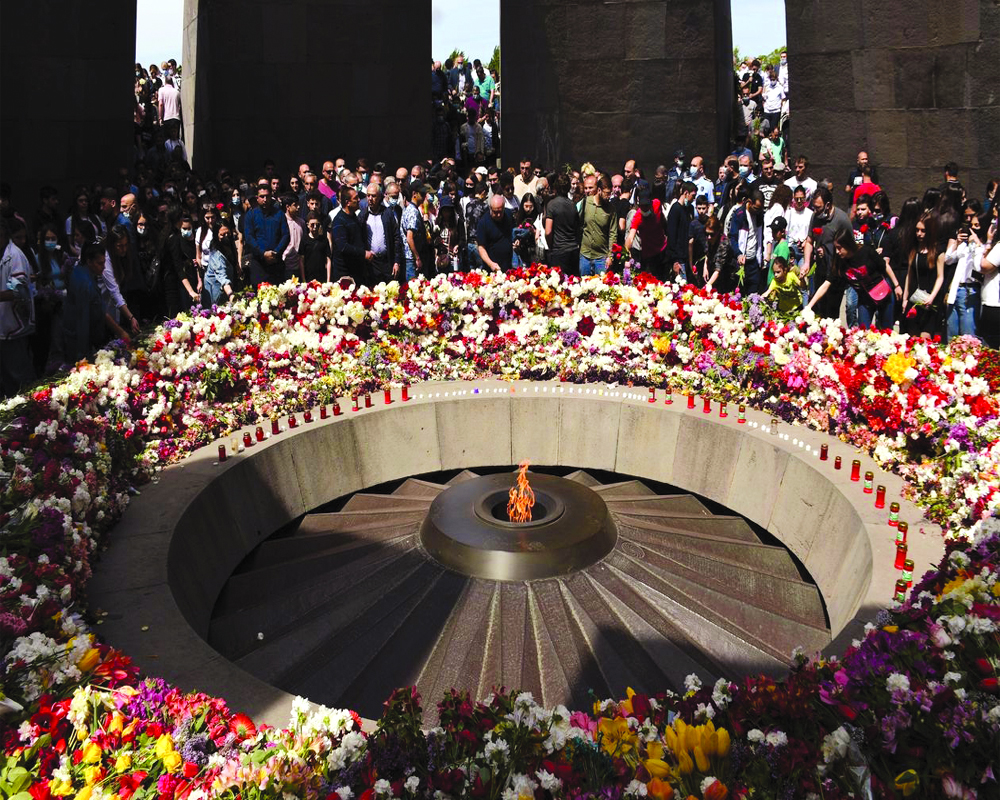 For Turkey, the massacre of Armenians is an unfounded slander and the current American pronouncement is emerging simply from the country’s internal political calculations. However, it’s high time Turkey came up with a credible answer to explain the organised killing of Armenians during the Ottoman Empire

On April 24, the Armenian genocide completed its 106th anniversary. As the parties involved in the conflict are restless, the mud-slinging game is on. Joe Biden is the first American President to recognise the Armenian killing as genocide. And this has sparked a new war of words between Washington and Ankara. The diplomatic spat between the two countries have now involved senior functionaries in the administration of both the countries.

Although Biden’s historic recognition is not laced with any economic sanction or diplomatic isolation, his explosive statement will certainly rock the already tense relations between the two nations. In fact, President Biden called up his Turkish counterpart the day before he made the announcement. Earlier American Presidents did not take the risk of infuriating Turkey, a key NATO ally and a strategically critical country, straddling West Asia and Europe.

Though the US’ new position is symbolic, it equates the Armenian massacre with the genocide under Hitler, and the Cambodian genocide by the Khmer Rouge under Pol Pot from 1975-79 and finally the Rawandan genocide against the Tutsis in April 1994.

Elated at President Biden’s declaration, Armenian Prime Minister Nikol Pashinyan has reacted by saying that is a “…powerful step on the way to acknowledging the truth, historical justice and an invaluable support for the descendants of the victims of Armenian genocide”.

However, moments after the release of Biden’s statement on Armenian genocide, Turkish Foreign Minister Mevlut Cavusoglu said, “The words cannot change or rewrite history. We have nothing to learn from anybody on our own past. Political opportunism is the greatest betrayal to peace and justice. We entirely reject this statement based solely on populism.”

This hints at Turkey’s sharp denial of the Armenian genocide. For Turkey, this massacre is an unfounded slander and the current American pronouncement is emerging simply from the country’s internal political calculations.

Thus, the Turkey’s Government says there was no policy of extermination to deal with the Armenian subjects under the Ottoman Empire. Key officials of President Recep Tayyip Erdogan claim that the current American stand on the Armenian genocide is simply to malign the global image of Turkey. The Turkish Ministry of Foreign Affairs says the demographic studies show that fewer than 1.5 million Armenians lived in the entire Ottoman Empire before the First World War. Hence, there is no question of the death of 1.5 million Armenians only in Eastern Anatolia. Again, alongside the loss of the Armenians, more than 2.5 million Muslims died in the Anatolian region in the same period, they claim. Finally, the Ministry says, “Documents of the time list intercommunal violence, forced migration of all ethnic group, disease and starvation as causes of death.” Therefore, Turkey officially does not recognise the killings as genocide.

For a fact, the killing of more than 1.5 million Armenians and other Christian minorities between 1915 and 1917 by the Young Turk administration in Anatolian Peninsula is widely labelled as “genocide”. These Armenian Ottomans were killed while they were being deported from Anatolia to the Syrian desert in the peak of the First World War. The Young Turks also known as Jon Turkler (in Turkish language) were the proponents of a political reform movement that took place in the early 20th century. The Young Turks wanted to replace the absolute monarch in the Ottoman Empire in those days.

The principal aim of this movement was to establish a constitutional form of government. They led a movement known as Young Turk Revolution against the Ottoman Sultan Abdul Hamid II in 1908 which culminated in the foundation of a constitutional government in Turkey. And by January 1913, the most militant members of the Young Turks like Talat Pasa and Enver Pasa took over the regime from their liberal colleagues in a coup d’état. It must be noted here that these young revolutionaries belonged to a small group called Committee of Union and Progress (CUP), an organisation belonging to the greater Young Turks Revolution. And only during the rule of these radicals, the mass killing of the Armenians took place during the First World War.

The history, legacy and tragedy around this mass murder is shrouded in controversies and contested narratives. However historical records of the later part of the 19th century show that even Sultan Abdul Hamid advocated pan-Islamic ideals for his empire. The year 1894 witnessed brutal killing of Armenians in the Ottoman Empire. The same year, rising agitations by the Armenians demanded political reform which forced the Sultan to use brutal forces to normalise the law and order situation. Contemporary historical records indicate the massacre of 80,000 to 300,000 Armenians and 25,000 Assyrians in a period of three years. Subsequently, the New York Times referred to the mass killings under Sultan Hamid as “Armenian Holocaust” in the year 1895 and popularly termed it as “Hamidian massacre”.

Therefore, it is not the only regime during the First World War but also the earlier that Sultans carried out atrocities against the Armenians and other smaller ethnic and religious groups in the Ottoman Empire.

One can possibly read what was there in the mind of Talat Pasa when he once said: “What on earth do you want? The question is settled. There are no more Armenians.”

An attempt to create a pan-Islamic and a pan-Turkic State finally led to the killing of all these Armenians. It was the hatred towards the Christians when the Ottoman Empire suffered a humiliating defeat in the historic Balkan War between 1912 and 1913. The young Turkish rulers were always suspicious of the Christian Armenians. The hardliners of the CUP strongly felt that the Armenians were collaborating with the foreign powers to harm the Ottoman Empire. After the humiliating defeat in the First Balkan War, when the Empire lost almost all their possession in Europe, the European leaders imposed a major set of reforms over the Ottomans, asking them to allow the supervision of the inspectors in eastern part of it. This directly resulted into a pure misconception among the Ottoman rulers thinking that only the Armenians were there behind this conspiracy. Thus, a sense of insecurity grew in the ruling elite that the Armenians could be working towards undermining the sovereignty of the Ottoman Empire. And all these above reasons and probably a growing movement of self-assertion among the Armenians led to the extermination of them by the Young Turk regime.

It is hard to access the exact number of Armenians lived in the Ottoman Empire during the First World War. But the Encyclopedia Britannica sources quote that there were around 2.5 million Armenians in the beginning of the 20th century in the Ottoman Empire. But today the modern Turkey has an estimated population of 70,000 of them only. The Armenians initially lived in the six provinces in the Eastern Anatolia, what is today known as Eastern Turkey.

However, these Christian Armenians never used to dominate one single area or zone. They also shared various parts of Eastern Anatolia with the Kurds population in those days. Records in Ancient history and in Middle Ages clearly say these areas were controlled by successive Armenian dynasties for long time although they used to face incursions from outsiders.

Unfortunately, by the 11th century, invasions and large migrations of Turkic population flooded the area, gradually overpowering the local Armenians. But then the worst was yet to come. By the 16th and 17th centuries, the Eastern Anatolia was incorporated into the great Ottoman Empire by the Turks, but the distinctive identity of the Armenians had remained intact. Another interesting fact was that the Armenians could always find a broader community connect with the other Armenians living beyond the Ottoman Empire in the neighbouring Russia.

For centuries, the multi-faith Ottoman Empire adopted a unique administrative mechanism called “Millet System” for its minorities. Under this system, the minorities, including the Armenians, enjoyed a considerable degree of self-governance to run their affairs. However, gradually, the Millet System declined. By the beginning of the 19th century, the rulers of the Ottoman Empire initiated a slew of administrative reforms to modernise its society and polity. On the way to modernise and secularise its institutions, the relationship between the Empire and its minorities changed.

These changes led to centralisation of power in the Ottoman state and as a result tensions rose between the majority Muslims and diverse group of minorities living within its territory.

In the past, the recognition of this tragedy as genocide has always been shaped by geopolitical games. On record, the UK, Israel and Azerbaijan have flatly refused to recognise this killing as genocide as they have been the allies of Turkey.

Whereas Lebanon, Greece and France, having large populations of Armenian descent and traditionally hostile to Turkey, have largely claimed this horrendous killing as genocide.

The reality is that truth finally prevails. And to speak no one needs to think at all. It’s time for Turkey to come up with a credible answer. The global blame game and taking political stands for saving one’s skin neither help the descendants of the victims nor the international community. However, the very use of the term genocide by Biden at this hour can rightly be called a moral slap on Erdogan.