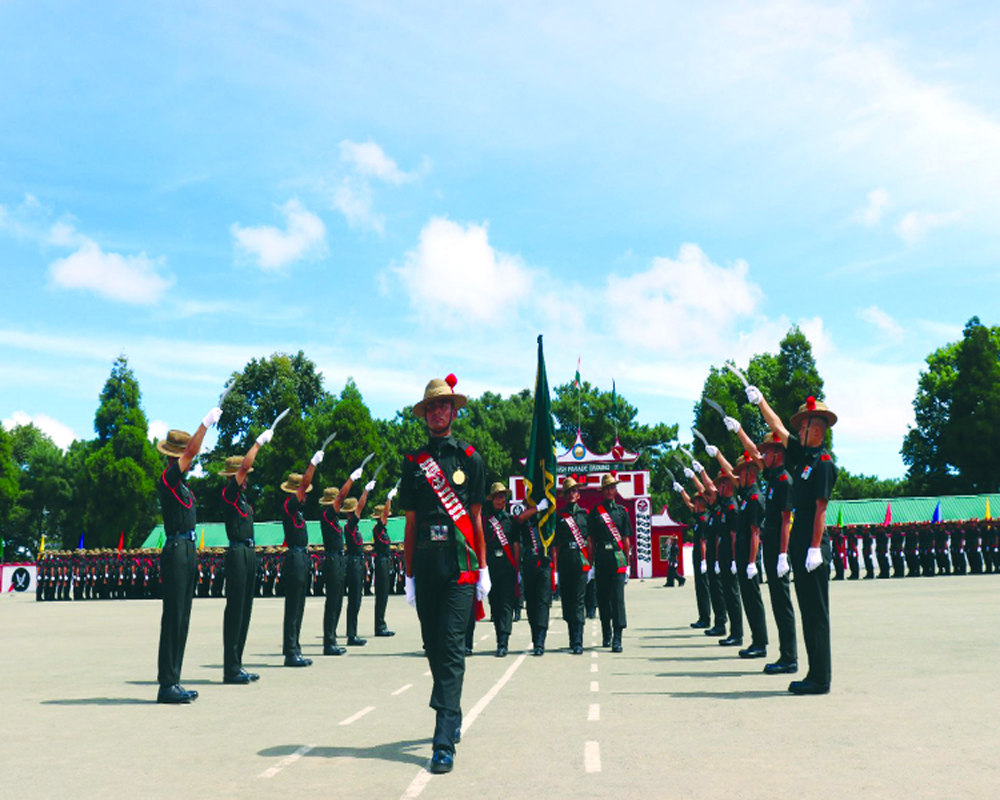 The parade at Happy Valley was strictly apolitical and secular. In contrast, the event at the Artillery Centre, Deolali, celebrated a single religion

In the salubrious climes of Shillong, I am attending the attestation and passing out parade of the 192nd batch of recruits and veterans’ reunion in Happy Valley where 58 Gorkha Training Centre is nestled among pine conifers and gentle slopes luxuriating in grass. Rain can be a spoilsport as Cherrapunji, the world’s biggest recipient of rain, is just around the corner. Luckily, the parade was blessed with sunshine as 256 recruits passed through an archway of khukris to turn into Riflemen, who will join their battalions in East Ladakh to Arunachal Pradesh and Tangdhar to Thiruvananthapuram. Young Gorkhas performed drill with Omega precision, pride and pageantry, watched over by Colonels of the two Regiments — 5 GR and 8 GR and veterans from India and Nepal. Swearing on the Gita, recruits from Nepal and India took the oath pledging allegiance to security and integrity of India by obeying orders from their officers and commanders as authorised by the President of India even if it involved sacrificing their lives. The foundational structure of the oath is the Constitution of India although the word ‘Constitution’ does not figure. What appears in the oath is ‘vidhan’ (legislation), not ‘samvidhan’. Wonder why?

On commissioning, officers take the same oath at military academies. Army chief MM Naravane, on taking over, said “the Army will be guided by the Constitution”, implying its insulation from ideas and vision of political parties, especially the ruling establishment. Pointed deviations from the military’s ethics and ethos have occurred through directions of political leadership. This infringement of military values is markedly visible since the BJP came to power with its vision of turning India into a Hindu Rashtra with a military that follows its tenets. The BJP has won over the majority of the military which acknowledges the impressive emphasis by the BJP on defence and national security even if the Government will not walk the talk on funding for modernisation. The Congress by contrast was a laggard on defence reforms and transforming the archaic military structures.

In Shillong, the flavour at the attestation parade and associated ceremonies was strictly apolitical and secular. In the commentary accompanying the parade during the carriage of the Gita through the rank and file of recruits was this memorable passage: “We respect equally the temple, mosque and Church. In one hand is the Gita and in the other, the Quran.” These words and deeds were quite the opposite of the attestation parade of recruits at the Artillery Centre, Deolali, recently. Artillery is a mixed-class all-India regiment where soldiers are drawn from all faiths.

At this parade, surprisingly, aarti was recited on the parade, with recruits and soldiers clapping in unison. On a prominent boulder on the parade ground was enshrined the symbol ‘Om’. Together, aarti and ‘Om’ celebrate a single religion, smacking of majoritarianism. This was the first time ever that aarti was sung on an official parade, attracting adverse comments on social media.

In Shillong, too, the aarti was sung but in its proper place, the temple, representing the faith of the single class regiment of Gorkhas from India and Nepal. Owing to the shortage of Indian-domiciled Gorkhas, some regiments are now recruiting Kumaonis and Garhwalis till the Indian-domiciled Gorkhas can fill up their quota of vacancies. The only deviation in Shillong from regimental traditions was the introduction of ‘Bharat Mata ki jai’ as the decisive chant ending all formal functions even after the national anthem.

The BJP has managed to infiltrate majoritarianism and Hindutva into the military. The Hindu-ised version of the procedure followed at the Artillery attestation parade could be a trial balloon to codify aarti in other mixed-class regiments of the Army. This must have had the backing of the military establishment. So far, neither the MoD nor Army Headquarters has commented on this serious breach of Army rules and procedures for attestation parades. It is a crafty method to influence faith and religion at the very inception of a soldier’s military career and is bound to disturb the secular traditions of the Army.

The Gorkha attestation parade combines every four years the reunion of veterans and their families from India and Nepal. Reunions are a perfect stimulus for bonding between the old and new. Regimental traditions, ethics and habits are therefore preserved. Regimental spirit is the strongest elixir. While Gorkhas are relaxed about religion and many are janjatis, they practise their religion and faith in the battalion mandir. Their officers are from across India: Sikhs, Hindus, Muslims, Parsis and Gorkhas. A Sikh or Parsi Commanding Officer will lead the mandir parade every Sunday. The mandir along with the religious teacher will accompany the unit into battle.

The Artillery’s attestation parade focused on Hindu religious rites in a mixed-faith unit on parade, setting a bad precedent for all-India mixed-class regiments.

While the military is on the threshold of path-breaking defence reforms, its leadership must not permit the creep of practices and procedures that will undermine its professional, secular and apolitical virtues. Politicisation will weaken the operational capacity and jointness of the Army, which is the sword arm of the nation. Discard the Deolali model; take the Shillong way.