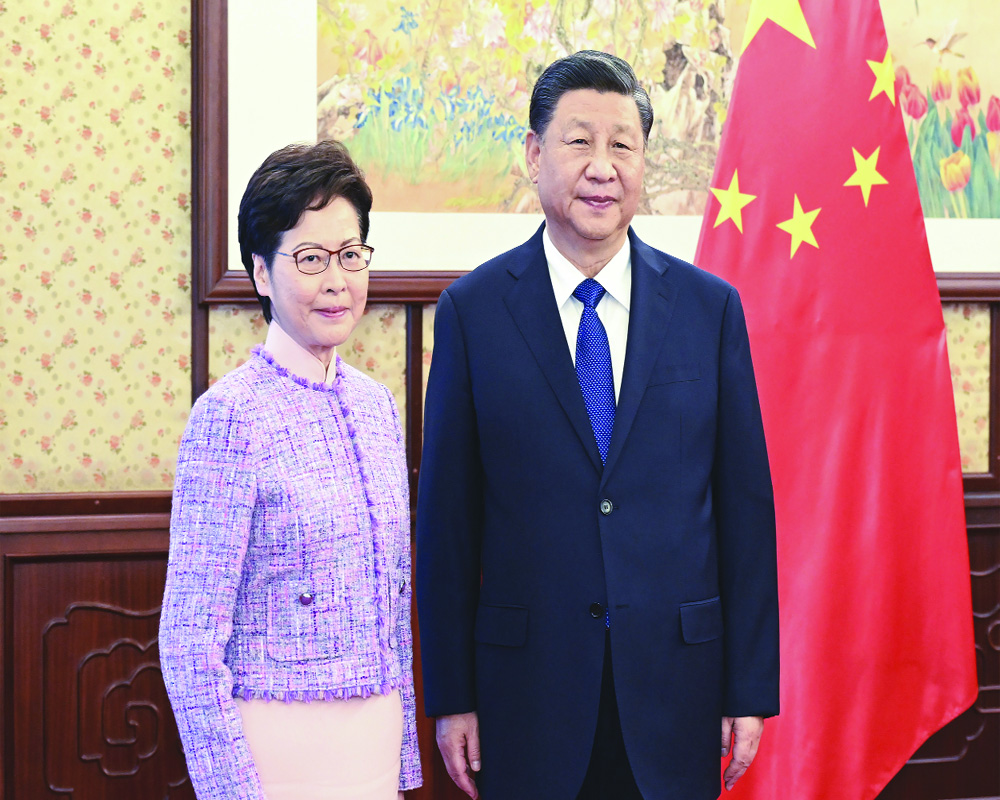 National Security in the Hong Kong Special Administrative Region law empowers Beijing to prosecute all the ‘troublemakers’ in the island, particularly the pro-democracy activists and their supporters. This law is aimed to bring an end to Hong Kong's autonomy and democratic future and the island will fast turn into a Communist fiefdom. The first signal is the dismal turnout in the election

The latest elections to the Hong Kong Legislature (known as Legislative Council or Legco) have clearly indicated how China is fast taking control over the island territory. Popularly termed as the first “patriots only” election for Hong Kong, it witnessed a record low voter turnout after the complete overhauling of the city’s existing electoral system. Many China observers say that this trend has reflected a steep decline in the civic and political engagement of the Hongkongers in a largely orchestrated electoral process of the territory. According to a government media release, the 30.2 per cent turnout was far lower than the earlier record low of 43.6 per cent in the year 2000. It must be noted here that the last legislative election five years ago recorded a polling percentage of 58 per cent.

This election is a historic one for Hong Kong. This is the first election conducted after passing the infamous National Security Law on June 30, an hour before the 23rd anniversary of the city’s handover to China by Britain in 2020. Officially it is known as the Law of the People’s Republic of China on Safeguarding the National Security in the Hong Kong Special Administrative Region (HKSAR).

The law empowers Beijing to handle all the troublemakers in the island, particularly the pro-democracy activists and their supporters. Further, the law creates four prominent offences, namely secession, subversion, terrorism and collusion with foreign forces to endanger national security. Many say that this law will bring an end to Hong Kong’s autonomy and democratic future forever. The island will fast turn into a Communist fiefdom. And the first signal has been directly sent by the results of this election only.

Also, this is the first election that took place after the massive pro-democracy movement of June 2019 when millions marched across the island territory, protesting against Beijing’s intervention and demanding more autonomy as promised under the Basic Law under which Hong Kong had to be governed with “One Country, Two Systems” till 2047. Mainly, the Hongkongers marched on the streets to protest a proposed extradition bill that would allow the city administration to extradite suspects to mainland China. It marked the beginning of a protest that was extended up to the year 2020. Seeing all these, Beijing initiated all preparations to bring back peace to the island.

Again, it is a remarkable electoral process as it is carried out under new stringent electoral reforms initiated in the month of March 2021. The reforms under the new electoral system offered the Government more vetting powers and it directly reduced the citizens to elect the candidates of their own choice. The new system simply allows the candidates screened by the government i.e. the “patriots”, those exclusively loyal to Beijing and the Communist Party of China (CPC) to stand in the electoral fray. Previously, the half of the 70 seat Legco members were elected by the people directly and the other half were selected by trade and industry lobbies, mostly loyal to mainland China. The worst part is that under the new electoral system, the Legco was expanded to 90 seats. The half of the seats are filled by pro-Beijing trade and industry conglomerates and only a bare minimum of 20 seats are made open to popular public voting. And this has been observed as the lowest number of seats for popular representation of the commoners since the handing over of the territory to China in 1997. It is clear now that Hong Kong’s pro-democracy movement will have to find other way out to fight the Xi regime and its tight National Security Law.

Further, this election will add more credibility to Carry Lam, the fourth and the current Chief Executive of Hong Kong since 2017 as she can show to Beijing that normalcy has returned to her city. Moreover, today the issue in Hong Kong is not freedom, basic rights and increasing intervention of Beijing over the autonomy of the island promised under the Basic Law. Crippling rent and large wealth inequality are simply making life unbearable in the city for the public. These are pressing issues beyond democracy. Thus, Beijing and the HKSAR administration under Lam hope that issue of survival will certainly bother more Hongkongers  than democratic rights and freedoms. And, hence, the patriots may get a fair chance to deliver the goods and services to the needy in the days to come.

Thus, Lam said that ‘it was an important election following the improvements to the electoral system to implement the principles of patriots administering Hong Kong”. In the guise of bringing more locals into the city administration, Beijing is simply turning the Legco into another committee of the National People’s Congress.

In a 1984 speech, the legendary Chinese leader Deng Xiaoping said, “We are convinced that the people of Hong Kong are capable of running the affairs of Hong Kong well, and we want to see an end to foreign rule. The people of Hong Kong themselves will agree to nothing less.” But what Deng pronounced 13 years before the induction of the island into the People’s Republic of China (PRC) seemed completely different as the Hongkongers gradually moved on with the archaic Communist system of Beijing.

Today, Chinese President Xi Jinping’s only intention is to display Beijing’s money and muscle power and to claim as many territories as possible. In fact, his extremely aggressive foreign policy is stimulating increased global opposition both to the country and to the CPC. Succinctly, it is directly undoing decades of efforts by the PRC to assuage its neighbours that a stronger China will always be peaceful and absolutely non-domineering. Xi’s predecessor Hu Jintao especially espoused the dictum called Hepen Queqi (Peaceful Rise or sometimes quoted as Peaceful Development) to convey to the world and its neighbourhood that China’s fast growing political, economic and military might would not pose a threat to world peace and security. The policy was articulated by China to counter its so-called “Threat Theory”. By 2004, then Chinese Premier Wen Jiabao said that China’s rise “will not come at the cost of any other country, will not stand in the way of any other country, nor pose a threat to any other country”. But what we have witnessed today is completely the opposite of all these Chinese Communists had preached before to mask the whole world. Not only its neighbours, but also its own rebel territories like Hong Kong and Taiwan, and precisely its own Uyghur Muslims in the westernmost Xinjiang Province are bearing the brunt of Xi’s vastly militarised statecraft. Needless to say, Uyghur genocide is fast threatening the survival of the community in this restive region. Therefore, Hongkongers may also encounter the worst forms of Chinese atrocities in the days to come unless the CPC mends its ways sooner or later.

Meanwhile, the joint statements released by the G-7 and members of the Five Eyes Alliance countries ( Australia, New Zealand, Canada, the UK and the UK) criticised the Legco election that drew a record low turnout of voters in the recent history of the island. On a separate note, the EU, the UK and the US also denounced the results of the election. To all of them, the new changes imposed by the Communists in Beijing are simply eliminating any meaningful political opposition in the HKSAR.

Finally, one must say that Hongkongers have set an example for all that one can and should do to stand up for freedom in the face of an authoritarian regime of immense brutality. This dedication and bravery of the islanders must be cherished and celebrated. But as of now what has been observed is that no one could help the Hongkongers except they themselves. However, the UK is the only nation in the world that could legitimately step into the current crisis, simply because China’s actions towards the island territory are directly violating the principles of the 1997 Sino-British Declaration.

At present, international pressure and isolation of China are the only solutions for bringing back Hong Kong to its original “One Country, Two Systems” status. Else, under the long arm of China’s security apparatus, the HKSAR will pass onto oblivion. But Hong Kong people kowtowing to the wishes and commands of the CPC will lead to the death of another democratic challenge against China. It will indeed be a failure of the global liberal order if millions struggling for their basic rights and freedoms are not supported. What is fast taking place in this island is nothing but the brutality and total disregard for humanity kept covered under the rubrics of Xi’s massive expansion plans. The road ahead for Hong Kong would be tumultuous. Sadly, most of the pro-democracy activists and lawmakers are today either in prison or in exile. China’s mindless violence, spying tactics and massive surveillance system have already worked very well.

What Franklin D Roosevelt once said seemed appropriate for today’s Hong Kong, “In politics, nothing happens by accident. If it happens, you can bet, it was planned that way.” Hong Kong’s current fate is all what the Mandarins have been planning quietly since the days of Deng to Xi now.