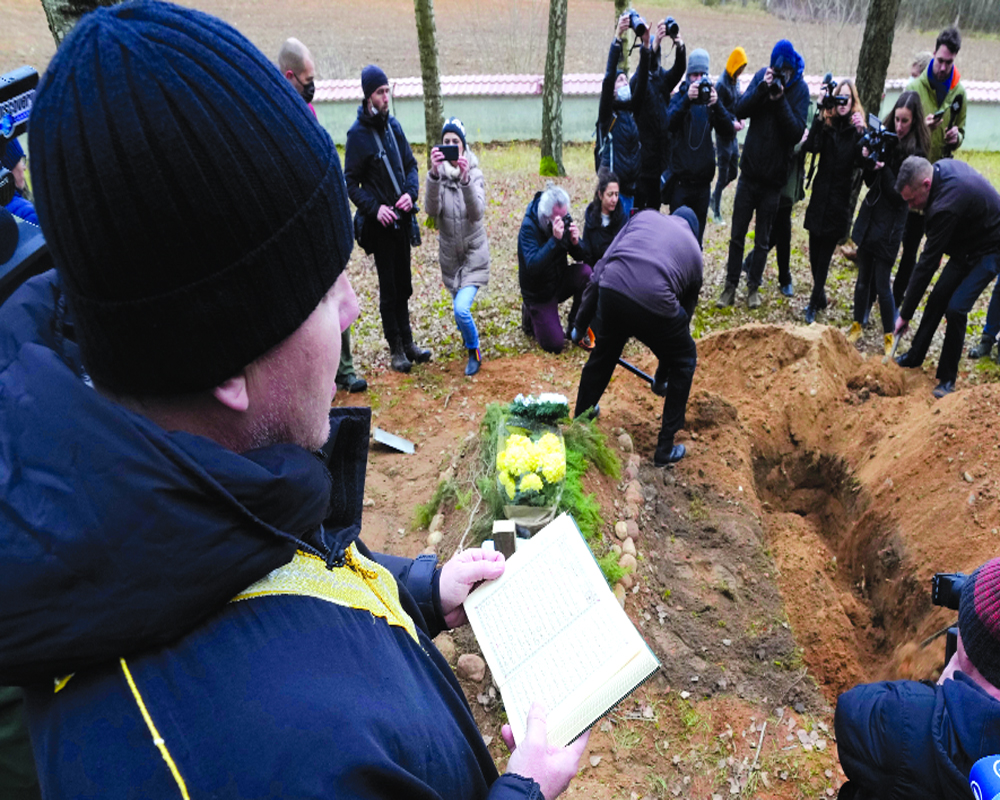 Leaders in the EU think that Belarusian President Lukashenko is creating the illegal passage for migrants from most of the war-torn and poverty-ridden countries to neighbouring Poland and other rich nations of the EU. Brussels and other major western powers must see to it that the migrant crisis does not turn into a broader regional conflict. Instead of raising concerns about Russia’s hidden intentions, the international community must clinch a deal with Lukashenko for an immediate solution to settle thousands of migrants stranded on the no-man’s-land on

Belarus-Poland border before the cold waves sweep them away Europe is once again facing the heat of a new migration crisis. This time two East European (EU) nations — Belarus and Poland — are on the verge of fighting on their borders. The reason is that over thousands of migrants that are camping on the Belarus-Poland frontier are trying to cross over to Poland. And the Polish border guards are simply not allowing them to get into their country. These hapless migrants are also trying to cross over to other European nations such as Estonia, Latvia and Lithuania. It seems to be a hybrid attack by Minsk, especially over Warsaw, Tallinn, Riga and Vilnius. For poor and helpless migrants from most of the conflict zones of the world, including Africa, this arduous journey could be a passport to the greener pasture of Europe. But what seems to be emerging from the ground is that it is soon sliding into a major humanitarian crisis, with the death of more than 10 migrants by now.

It is worth exploring the origin of the current imbroglio on the Belarus-Poland border. Belarus was rocked by massive opposition protests following the presidential election in the month of August 2020. That election gave Alexander Lukashenko more opportunity to tighten his grip over Byelorussia (historically called), the Republic of Belarus. However, the Opposition, the European Union (EU) and the West openly declared the election and its result as sham. The Belarusian authorities responded to the demonstrations with fierce force followed by jailing of prominent activists and opposition leaders. The US and the EU subsequently imposed sanctions over Belarus. These restrictions over the Government of Lukashenko were toughened when after an incident in May when a passenger jet flying from Greece to Lithuania was diverted by Belarus to Minsk simply to detain dissident journalist Roman Pratasevich. The EU later termed this incident as ‘Air Piracy’ and barred Belarussian State airlines from its sky. Besides, the group also drastically cut the import of top commodities from the country like petroleum products and potash. The authorities in Minsk hit back at Brussels and refused to abide by an agreement to prevent illegal migration to the EU. It also opined that the severe EU sanctions deprived the Government of much needed funds to stem the flow of migration across its borders. Thus, gradually the massive flow of migrants hailing from Syria and other conflict zones around the world started arriving in Belarus and they all moved towards the borders of Latvia and Lithuania in the North-West and Poland in the West. Today the opposition in Belarus is accusing Lukashenko of using the Government tourist agencies to offer free visa facilities to all these migrants so that they could go to the bordering nations like Poland, Latvia and Lithuania. And finally, they could easily enter different parts of the EU.

The centre point of the migration crisis is President Lukashenko. Leaders in the EU think that he is creating the illegal passage of migrants from most of the war-torn and poverty-ridden countries to neighbouring Poland and other rich nations of the EU. These migrants are mostly from war-ravaged nations such as Syria, Iraq, Libya, Yemen, Afghanistan, and even from Communist land of Cuba. Most of the EU leaders say that Lukashenko’s trouble-making is fundamentally connected to the strict sanctions imposed by the bloc over Belarus. These sanctions have been in place since late 2020 because of the controversial presidential election in this landlocked East European country that saw the return of Lukashenko for the consecutive sixth term to power. And most importantly, massive human rights violations and his brutal treatment of all his opponents, including the main contestant for presidency, 37-year-old Svetlana Tikhanovskaya who is currently in exile in Lithuania.

Today, Lukashenko is probably the last surviving dictator of Europe. He took over power in the year 1994 immediately after the breakdown of the mighty Soviet Union. Many say that he has been maintaining the glory and elements of bygone era Soviet style of communism. Almost each sector of the economy of this former Soviet Republic is under the absolute control of the State. The secret police that maintain strict surveillance over all powerful and anti-Government forces in the country is still known as the KGB.

Lukashenko, the mercurial leader, is known for his West-battering. He has a long history of defying the West. His immediate relief directly flows from no other than the Russian strongman Vladimir Putin, who makes no secret of his sheer disavowal of colour revolutions in his neighbourhood, especially one that has been troubling Belarus since last year. And now comes the migration crisis, wherein the EU leaders are all up in arms against his longstanding ally Lukashenko. Putin blames the West for the migration crisis at the Belarus-Poland border. To him, the root of the current migration problem lies in the chaos created by the West in Iraq and in Afghanistan; and Belarus can nowhere be blamed for the same. Referring to conflicts in Iraq and Afghanistan, Putin highlighted that Iraqi Kurds and Afghans were among the migrants at the Belarussian border. His comments came as the Polish police recovered the body of a young Syrian man near the border town of Wolka Terechowska in the north-eastern Poland close to Poland-Belarus border.

More than Belarus and Lukashenko, now Putin has become more anxious about the migration crisis. Meanwhile, Russia and Belarus have conducted snap paratrooper drills just 20 miles away from the border where migrants are gathered. It was intended to test the readiness of their troops. Around the same time, Washington has also warned that Putin could be preparing for an attack on Eastern Ukraine. It is learnt that Russia is massing thousands of troops, artillery and tanks on the border posts. This all shows Moscow’s full preparation to support Minsk in case a crisis occurs from the other side of the border in Warsaw.

The EU has threatened that it will slap new sanctions on Belarus targeting everyone involved (people, airlines, travel agencies, etc.) in facilitating the migration crisis. Amid the escalating crisis, EU Commission President Ursula von der Leyen warned the EU will expand sanctions on Belarus and will target airlines which support “human trafficking”. Meanwhile, some carriers have already declared they won’t be undertaking services to Belarus, including the Turkish Airlines. Jens Stoltenberg, the Secretary-General of the North Atlantic Treaty Organization (NATO), warned Moscow against potential aggressive actions amid a large concentration of Russian troops on Ukraine’s borders. Kamala Harris, the US Vice President, has commented that Lukashenko is engaged in very troubling activity and world is watching what is happening there. In fact, Putin’s sudden movement of armed forces may indicate the potential for a wider geopolitical crisis in the region. Currently, Ukraine is not a member of the EU or the NATO, but both the organisations are deeply concerned about Russia’s quick military build-up on its border. The Baltic nations like Latvia, Estonia and Lithuania accused the Lukashenko regime of instrumentalising migration for political purposes. Again, Poland, Lithuania and Latvia are thinking of invoking Article 4 of the NATO. This Article calls for consultation when “the territorial integrity, political independence or security of any of the parties is threatened”. Polish Prime Minister Mateusz Morawiecki is already talking to his counterparts in Latvia and Lithuania for all possible assistance from the NATO. Now it needs to be seen whether such an emergency has occurred or not. With Lukashenko dialling up Angela Merkel, known popularly as the de facto leader of the EU, a solution to the migration crisis is expected.

Finally, without speculating one can say that Russia has always demonstrated its firepower either to showcase its strength or simply to warn the West and the EU not to step into its traditional areas of influence like Belarus. Lukashenko, a man who has already survived many setbacks and crises in recent years, knows his limits and is well aware about of the impact of severe sanctions. Unless a big colour revolution comes with the full support of the elite of Belarus, Lukashenko will ever remain strong in Minsk. At the moment, the EU and the other Western powers are mounting pressures on Lukashenko, including further sanctions. At the same time, together they are targeting Russia whereas the centre of the problem lies in Belarus-Poland border. Brussels and other major western powers must see to it that the migrant crisis does not turn into a broader regional conflict. Instead of raising concerns about Russia’s hidden intentions, the international community must clinch a deal with Lukashenko for an immediate solution to settle thousands of migrants stranded on the no-man’s-land on Belarus-Poland border before the cold waves sweep them away.