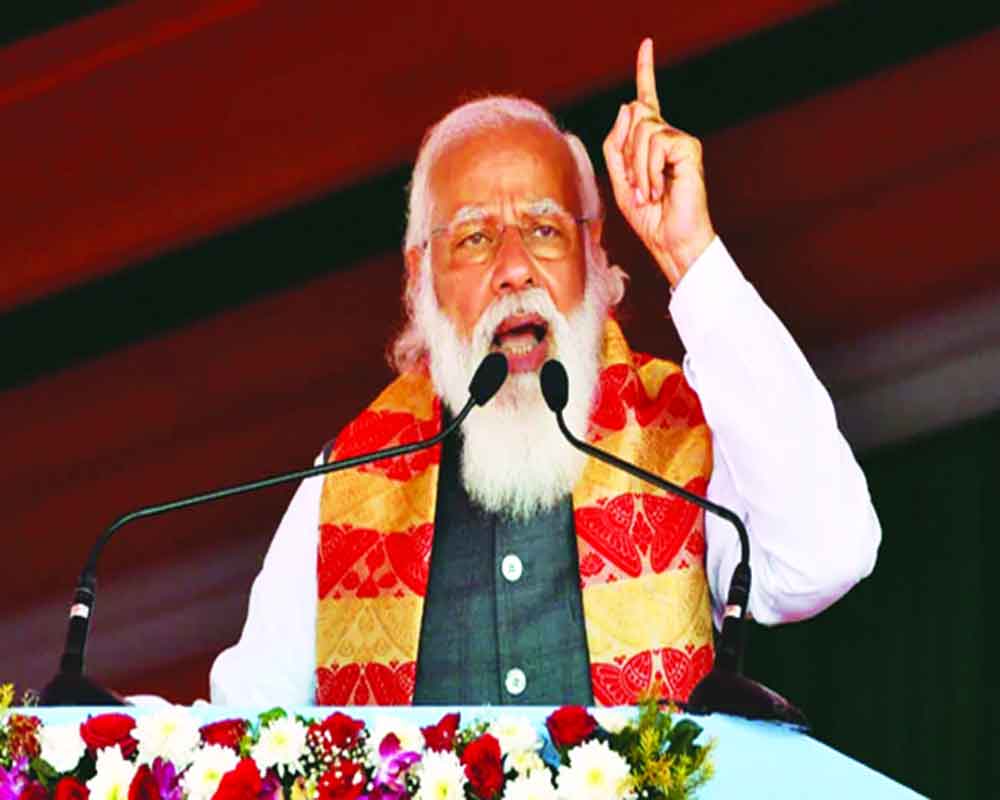 The BJP must traverse light years before it could have its rendezvous with victory in States like Tamil Nadu or Kerala. No doubt, the Hindutva party’s four nominees entered the precincts of the Tamil Assembly piggy riding on the shoulders of the AIADMK, a political outfit which could complete its five-year tenure as the ruling party only because of the tacit support provided by New Delhi.

State BJP chief L Murugan had said in August 2020 that his party would win at least 60 seats in the Tamil Nadu election. When the party settled to contest 20 seats under the leadership of the AIADMK in the 2021 Assembly election, Murugan said his mission was to make sure that the BJP has double-digit representation in the House. Thanks to the support extended by the Dravidian major, the BJP entered the House after a gap of two decades.

The BJP national leadership’s dream of making the lotus bloom in Kerala not only fell flat this time too but the party saw the lone representation withering away into oblivion. The run-up to the 2021 Assembly election in the State was dominated by the BJP. K Surendran, the 50-year-old president of the Kerala unit, heli-hopped from Kasaragod in north to Konni in south (he was the lone candidate in the State to contest two constituencies) and boasted of forming a Government once the party wins 35 MLAs of its own in a House with an effective strength of 140. The how, when and with whom were questions the party chief kept as “State secret”.

In the end, the BJP drew a blank despite fielding some of the best names in Kerala’s social life like the legendary E Sreedharan and Dr Jacob Thomas, the former super cop known for his fight against corruption.

The BJP’s national leadership is unaware of the inherent weakness of the Kerala unit. There are no leaders who could sell the party to the voters. The party’s dreams of coming to power by large-scale poaching will not yield results as voters in this part of the land are choosy as well as politically conscious. The reality is that there is not a single individual in the current crop of BJP leaders who could be projected as the Chief Minister. This is in stark contrast to the array of leaders in the CPI(M) and the Congress that include youngsters like Mohammed Riyaz, AN Shamseer of the CPI(M) and K Sudhakaran and VD Satheeshan of the Congress. No one in the Kerala BJP has wide acceptability among the voters.

Though Kerala has representation in the Union Council of Ministers, it is an aberration. The Minister entered the Rajya Sabha through the Maharashtra Legislative Assembly and was sworn in as a Union Minister, which can at best be termed a backdoor entry. The Minister concerned and the party’s State chief have formed a caucus not to allow the emergence of an alternative leader. The BJP faces the ignominy of its State chief being summoned by the Kerala Police for interrogation for his alleged role in transporting Rs 3.5 crore unaccounted money and also for allegedly threatening a rival candidate at Manjeswaram in Kasaragod to withdraw from the race during the 2021 Assembly election.

Factionalism and groupism are the major issues retarding the growth of the BJP in Kerala and Tamil Nadu. The CPI(M) might have degenerated to a certain extent but one should not forget the popularity enjoyed by leaders like Pinarayi Vijayan, MV Govindan, P Jayarajan and the likes who built the party with sweat and blood. The Congress, despite its poor showing in north India, continues to be a strong outfit in Kerala. One need not research deeply to find out why former party president Rahul Gandhi chose Wayanad to contest from. Does anyone remember the name of his rivals in the 2019 Lok Sabha election from the constituency?

More fireworks could be expected from Kerala, Tamil Nadu and the Union Territory of Puducherry units of the BJP in spite of the COVID-19 lockdown and restrictions. The BJP’s South Indian dreams are likely to turn into nightmares unless the party’s high command zeroes in on honest, efficient and dynamic persons as its leaders.

The Tamil Nadu BJP activists always complain that the State leadership is vertically split, with one faction known for its pro-DMK stance and the other rooting for the AIADMK. There are no pro-BJP elements in Tamil Nadu BJP itself, say the party activists. The situation is similar in Kerala, with half the leadership known for pro-CPI(M) stance and the other half acting as the Congress loyalists.

The standard explanation given by the BJP’s State leadership after each election is: “There was large-scale vote transfer between the LDF and the UDF to get the BJP candidates defeated.” They don’t like to see the reality in the eye: It is not one or 100 votes getting transferred. It is impossible to shift thousands of votes belonging to one party to another or vice versa without the concurrence of the people. Whom are you trying to deceive but yourself, sir? The voters are not members of the Animal Farm conceived by George Orwell.

(The writer is a senior journalist.The views expressed are personal.)