Can Israel be led by a fragile coalition?

Can Israel be led by a fragile coalition? 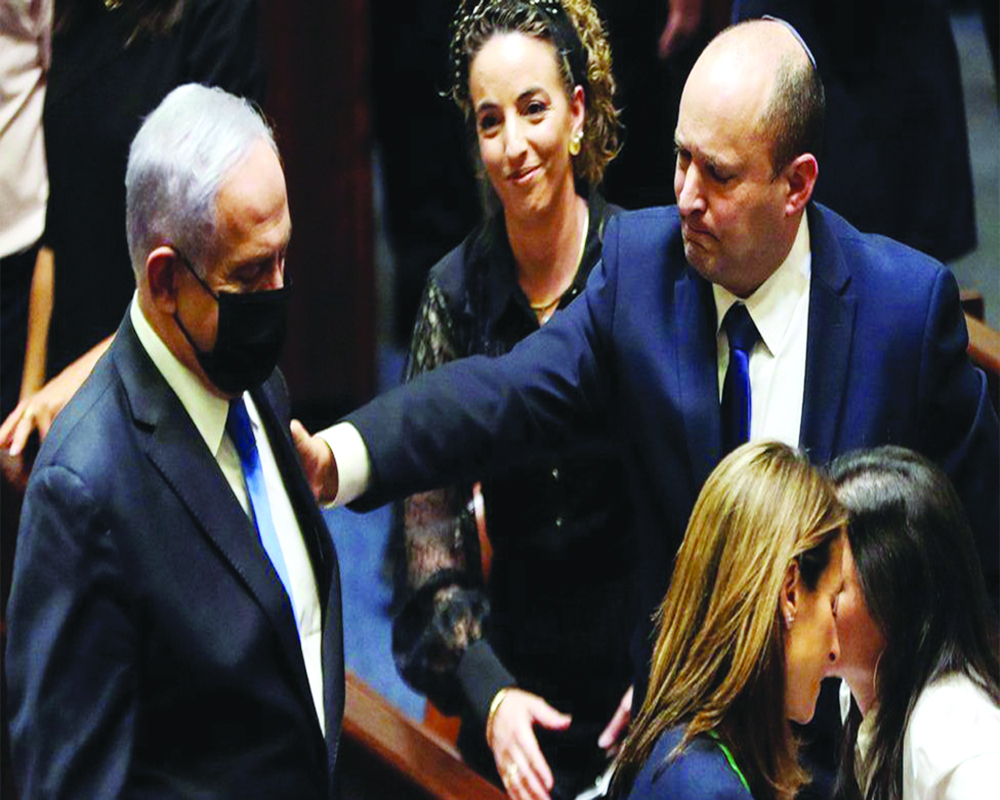 Will Bennett be able to stay afloat or go down the quicksand of a hopelessly divided Knesset? His ousted rival Netanyahu has not thrown in the towel yet

Israel has got a new Prime Minister after 12 years, an exceptionally long period in the history of the Zionist country with splintered politics. Not even David Ben-Gurion, Israel’s first Prime Minister, had served so long continuously in any of his two stints i.e 1948-54 and 1955-63 as did Benjamin Netanyahu in his second innings before being ousted by Naftali Bennett recently. Interestingly, both Netanyahu and Bennett came from the prestigious Israeli commando unit Sayeret Matkal also called Unit 269. Its motto – “Who dares, wins” is likely to play out in Israeli politics in the days ahead. The fragile coalition of Yamina, Yesh Atid, New Hope, Blue and White, Yisrael Beitenu, Meretz and Labour parties forming the 36th Government is an audacity of hope that might go down the quicksands of a divided Knesset anytime. With Likud still the single-largest party, only one vote (60-59) differentiates the ruling “Parliamentary Grouping” from the Opposition.

Way back on May 17, 1999 Netanyahu was dislodged from the prime ministerial post for the first time. His then rival was an Israeli Defence Forces’ General whose moving elegy on Netanyahu’s late brother Yonatan Netanyahu (1946-76) formed a part of the school curriculum in Israel. Yonatan was martyred in Operation Thunderbolt, or Israel’s daring commando mission to rescue Israeli passengers from the hijacked Air France flight from Entebbe Airport in Uganda on July 4, 1976. The author of the elegy was Ehud Barak, the man who became the 10th Prime Minister of Israel, by defeating Netanyahu convincingly.

For a brief period between 1996 and 2001, Israel had experimented with direct prime ministerial elections in a bid to arrest political instability. It was, however, soon junked after Ehud Barak’s incumbency lasted less than two years, due to vicissitudes of Israeli politics, despite the fact that the Knesset completed its normal four-year term. Exactly 20 years later, it was interesting to find Netanyahu pitching for a revival of the system. He argued it could bring political stability in Israel by shielding the Government from the Knesset’s longevity. However, the failed idea, found little favour with Knesset committees mostly in the hands of Netanyahu’s opponents.

Despite Netanyahu’s best efforts a motley “Parliamentary grouping” has been able to dislodge him from the Prime Minister’s post. His 12 years in the august office from March 31, 2009 have finally come to an end. Will this be a political requiem of 71-year-old Netanyahu, as many people feel and want? The man himself disagrees. Son of a centenarian and historian father, the late Bentzion Netanyahu, he perhaps feels life and history will both be on his side.

Naftali Bennett, the new Prime Minister of Israel, has impressive credentials. A commando by training, he served in reserve duty of the Sayeret Matkal. In 1999, he founded a high-tech company Cyota, specialising in information security. He also served as CEO, of Soluto, which he later sold for around $100 million.

In 2005, destiny brought him close to Netanyahu, when the latter was Leader of Opposition in the Knesset. He became the head of Netanyahu’s general staff, and helped him formulate the education reform plan. Soon after Netanyahu came to power in 2009, Bennett was appointed as Director-General of the Yesha Council, an umbrella organisation of municipal councils of the Jewish settlement in West Bank. He led a fight to lift the freeze on fresh settlement activity of Jews in West Bank. The Jews view the West Bank (or river Jordan) as Judea-Samaria of the Old Testament. The same year he co-founded the ‘My Israel Movement’ which fought campaigns to boycott Israel, post-Zionist movements, and the boycott of Israel. His entrepreneurial achievements catapulted his name to the pages of Forbes magazine in 2012. In November, 2012 he was appointed as the chairman of the HaBayit HaYehudi, the national religious party. In 2013- in the elections to the 19th Knesset, he led his party to a historic tally of 12 seats. This time Netanyahu appointed him as the Minister of Economy, Minister of Religious Services and Minister of Jerusalem and Diaspora Affairs. In elections to the 20th Knesset (2015), Bennett’s party won eight seats. He was made the Minister of Education and Minister of Diaspora Affairs in the 34th Government.

Did Bennett realise that he would come to lead the 36th Government? The credit greatly goes to the fissiparous politics of Israel, which can throw up impossible coalitions as the current one. The true credit goes to Yair Lapid, a former journalist and boxer, who leads the Yesh Atid party, who convinced Bennett to form an anti-Netanyahu coalition that can seize power. While Lapid is avowedly secular, Bennett is a demonstratively religious Jew. Contrary to speculation Mansour Abbas has not become a Deputy Prime Minister. His United Arab List itself is a divided house on joining the Government. This was apparently after the bad Press they got in the neighbouring Arab countries on their plans to join the Government.

With Bennett being pro-settlement, he is likely to follow a hawkish policy vis-à-vis West Bank. The two-State solution, defunct anyway since 2007, after Fatah and Hamas irretrievably split, will elude the liberals again.