Challenges await the UP Govt

Challenges await the UP Govt 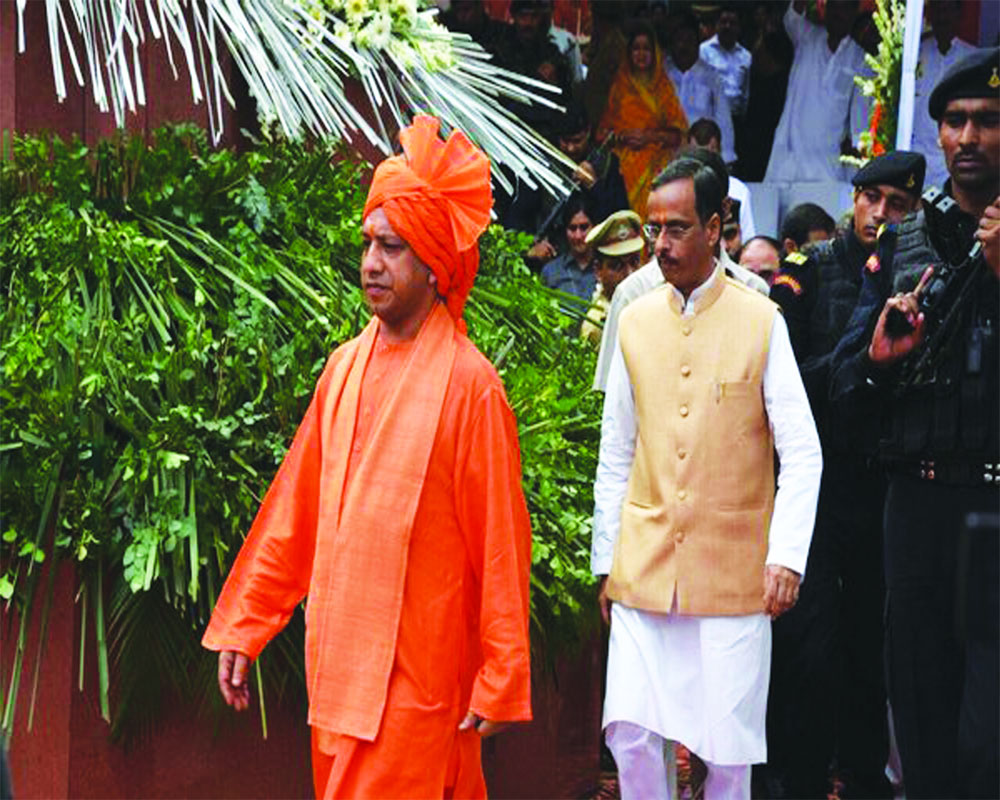 There could be a sense of complacency that people will vote for the BJP in the absence of an alternative. Yogi needs to shrug it off and ensure that infrastructure projects take shape soon

Sabir Ahmad was sitting outside a tea shop in Attara market in Banda, Bundelkhand, when this reporter met him by chance on February 10. He lives in a nearby village and had come with his friend Vinod Chaudhry to the market to purchase some goods. During the conversation, he casually mentioned that he had got a house under the Pradhan Mantri Awas Yojana (PMAY). “I must thank Chief Minister Yogi Adityanath for giving us a pucca house,” he said as his friend, who is also a beneficiary of PMAY, nodded in agreement. “I am happy that Yogi, as the Chief Minister of Uttar Pradesh, is ensuring that Government benefits reach Hindus and  Muslims alike,” Ahmad said.

Yogi’s political image (constructed by his rivals) is that of a Muslim-hater. When the BJP named him as the Chief Minister of Uttar Pradesh (UP) in 2017, questions were raised whether a monk of a mutt would be able to control the politically-sensitive State. The Muslims reacted sharply. They feared that Yogi had been selected to strengthen the party’s Hindutva raj. The internal balance within the BJP, too, was tilted against him because Yogi was branded as a rabble-rouser and  had revolted against the party leadership many a time. It was believed that he would never be able to complete full term in office because of his domineering nature. Some political pundits even believed that Keshav Prasad Maurya would replace him.

However, in the last four years, Yogi proved everyone wrong. Yogi gradually gained stature in the party and his hard work paid dividends. After Narendra Modi and Amit Shah, Yogi emerged as a top-ranking leader in the BJP. At the national level, people started talking about him having prime ministerial calibre. At the administrative level, Yogi not only controlled Hindu hardliners but also instilled confidence among the Muslims. The cow vigilante groups or the rowdy Bajrang Dal activists who were usually active during Valentine’s Day have all but vanished. The police were given a free hand and even Right-wing leaders were sent to jail once they went to the other side of the law.

“The mantra of this Government is ‘sabka saath, sabka vikas’ and we are sticking to it. There is no difference between Hindus and Muslims. The Government is working for the welfare of all sections of society,” the Chief Minister told this reporter recently.

Yogi said that when the Government assumed office, the State’s coffers were empty, law and order was in a shambles. In many areas of UP, the situation had become so bad that people were forced to sell their houses and settle in other places. The current Government has established the rule of law and good governance. As a result, all the festivals are held in an atmosphere of peace and harmony.

Yogi was sworn in as the 21st Chief Minister of UP on March 19, 2017, and is the fourth from the BJP to occupy the top post. Before him Kalyan Singh, Ram Prakash Gupta and Rajnath Singh served as the Chief Ministers of UP. Yogi is the longest-serving BJP CM and is likely to complete his full term even as none of the other BJP CMs completed three years in office. In the last four years, he has been able to win the hearts of the people. The perception of people has changed because of the improvement in law and order and infrastructure facilities. As a result, UP has become number one in programme implementation and is now a sought-after destination for investors. MoUs worth Rs 4.68 lakh crore were signed at the Investor Summit held in Lucknow in 2018. Out of these, projects worth overs Rs 3 lakh crore have been started. An investment of Rs 50,000 crore was made in the defence corridor set up in Bundelkhand which will also create five lakh employment opportunities. As many as 13 new MoUs worth Rs 4,500 crore have also been signed at the Aero India show held in Bengaluru recently.

The Yogi Government has dedicated the last four years in tackling infinite challenges, exploring endless possibilities and realising the dreams of the public. The mantra of “reform, perform, transform” adopted by the Government helped in restoring UP’s image as a State with infinite potential and possibilities.

This has resulted in the creation of an atmosphere of development, trust and good governance in UP. The Government has set new standards of development in every field. This has helped the Chief Minister to change the perception of people towards UP and investors are coming to the State because the Government has introduced transparency in its working. That’s why UP is second in the Ease of Doing Business index in the country. Police reforms, too, were pending for years. These were implemented to improve the law and order machinery.

Perception has become the buzzword now and Yogi talks about change in perception in all his speeches. Addressing a series of rallies in Bengal and Assam, he talked about the change in perception and how people of all castes, creed and religion are marching forward together because they have a belief that the BJP Government will protect them. This change in perception has helped big multi-national companies to set up their units in UP. Sugar mills, which were closed for decades, have started operations and the ambitious ‘One District, One Product (ODOP)’ scheme has given wings to  local artisans and they are getting work in their villages only.

The Government’s dossiers claim that the State has helped over 49 lakh Micro, Small and Medium Enterprises (MSME) units in UP to get a finance of over Rs 1,84,000 crore from various banks in the last four years. This year alone, bankers have financed over seven lakh new MSME units. In the last four years, the economy of the State has increased to Rs 21,73,000 crore from Rs 10,90,000 crore taking UP to the second position in the country. UP is moving towards becoming the biggest economy in the country and its per capita income has also almost doubled. According to the latest report by the Center for Monitoring Indian Economy (CMIE), the unemployment rate in the State came down to 4.1 per cent in February from 17.5 per cent in 2017. This proves that despite the Coronavirus pandemic that has delayed many projects, employment opportunities have been created in UP.

What has gone in favour of Yogi  is his transparent style of working. The Government has given appointments to over four lakh people in the Government sector, without any complaints coming to the fore. During  Akhilesh Yadav and Mayawati’s time, the Government appointments were mired in controversies and accusations of favouritism.

However, all these achievements come with challenges. The biggest challenge Yogi is facing now is to lead the party in the Assembly elections slated for early next year amid the Opposition’s charges that the suffering of the people is being ignored by Government officials and political leaders.  Recently, a video of Labour Minister Swami Prasad Maurya went viral where he can be seen rebuking a woman who had come to him for help.

Ram Iqbal Singh, a lawmaker from Ballia, said recently in a BJP State working committee meeting that tehsils and police stations have become centres of corruption. Surendra Singh, another lawmaker seconded it. Last week, Yogi’s office issued notices to 25 DMs and SSPs for not picking up calls from the CMO despite a clear directive from the Chief Minister that district officials should attend all calls or call back if they missed any call.

Such ugly incidents could harm the party in the next election. In the absence of an effective Opposition, the BJP is almost ruling the roost. There could be a sense of complacency that people will vote for the BJP in the absence of an alternative. Yogi needs to shrug it off and ensure that infrastructure projects actually take shape before the end of this year. He needs to shepherd his resources and manpower to a legitimate end. This is a big challenge and how Yogi meets it, only the time will tell.

The writer is Executive Director (News), Lucknow Pioneer. The views expressed are personal.