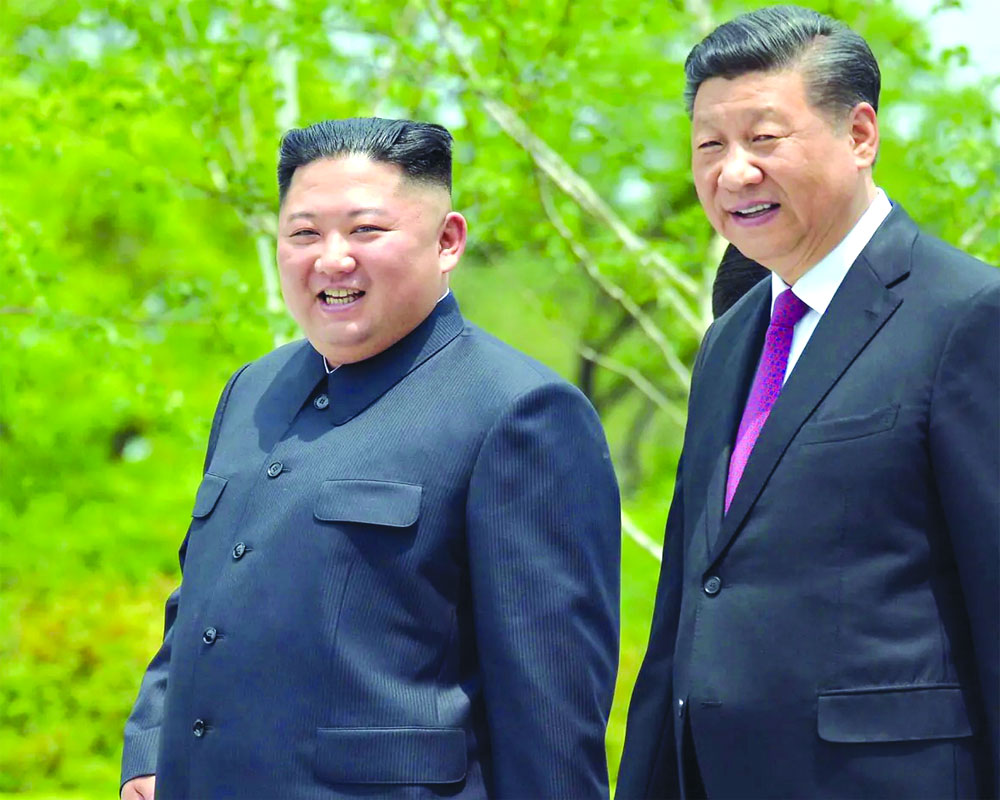 Though the US and China both have voiced concern over North Korea’s nuclear ambition, their approaches to the same goal are distinctly different. America wants China to use its economic leverage to pressure Kim to abandon nuclear ambitions. However, China under Xi, is willing to do only what suits its interests

China has spread its tentacles across almost all corners of the world. With North Korea, China has employed a unique strategy both to support stability and to have a grip over the nuclear gear of this mysterious land.

Successive Chinese leaders have maintained three distinct strategies towards North Korea: first, not to provoke a war; second, to maintain the status quo; and finally, no to nuclear arsenal.

The relationship between China and North Korea can aptly be described through this Chinese proverb: “Chun wang chi han” (If the lips are gone, teeth will be cold). It rightly indicates that both the countries are intimately interdependent. Beijing’s support for Pyongyang dates back to the historic 1950-53 Korean War. Those were the days, China under Chairman Mao, was more than eager to aid its northern Communist ally North Korea, against the capitalist South Korea. Its support to North Korea continues irrespective of whoever comes to power in Pyongyang.

On record, China is North Korea’s biggest trade partner till date. In fact, from 2000-2020, the bilateral trade between both the nations have increased almost ten-fold. Even amid tougher international trade sanctions against North Korea, the long China-North Korea border is still open for established trade routes in commodities such as mobile phones, silkworms, fuel, seafood, etc.

Much beyond these regular economic activities, China has established a high-speed railway link between its border cities like Dandong and Shenyang so as to boost trade with North Korea. Both the nations have also opened a cargo and container shipping route to enhance the supply of coal from North Korea to China. China also offers aid to North Korea primarily in food and energy sectors.

Besides China, the US, Japan and South Korea provided more than 75 per cent of the food aid to North Korea since 1995. The country’s severe famine was caused by heavy floods and droughts that took lives of more than million people in the 1990s. Unfortunately, the country has not been able to come out of this prolonged food crisis till date. Thus, Pyongyang is fully dependent on China and its goodwill.

As per the estimates revealed by the UN agencies, more than 43 per cent of the country’s population is malnourished. Though Kim Jong-un is focusing on rapid economic development, the country has not been able to attract any foreign investment because of severe international sanctions. Its only hope is China and the country is looking for robust economic ties with the former.

However, China’s continued support to Pyongyang came under severe strain when the latter tested a nuclear weapon in October 2006. Subsequently, Beijing had to back a UN Security Council Resolution No. 1718 that led to the imposition of severe sanctions against North Korea. And for the first time, the international community witnessed transition of China’s tactics from sustained diplomatic support to outright punishment towards its Northern Communist neighbour.

When in November 2017, Kim again tested a missile, Beijing called on Pyongyang to restrict all actions that create tensions in the Korean Peninsula. These all clearly demonstrate that China is wary of North Korea’s belligerent moves that may militate against the mutual interests of both the countries.

Beijing has played the role of a powerbroker during all high-profile global negotiations on North Korea. After two crucial summits between then US President Donald Trump and North Korean leader Kim Jong-un, international policy makers have so far focused mainly on denuclearisation steps, immediate measures towards peace in the Korean peninsula and finally, corresponding sanctions relief.

However, Pyongyang has been becoming an Asian tinder box. Kim’s madness and clandestine nuclear programme could turn the entire Korean peninsula into a serious war zone of the continent.

Probably, China knows best how to tackle Kim dynasty. But then at times some foundational questions arise as to whether North Korea is a strategic liability or an opportunity for China. The Communist leaders in Beijing must have realised the fact that its northern neighbour is to be tamed and to be used for all possible gains both domestically and internationally.

The world brands North Korea as a pariah state, but Beijing takes the Kim regime otherwise. Though apparently China has backed the UN sanctions against North Korea over its incessant efforts to become a formidable nuclear state, its financial and trade support directly and effectively facilitated Kim’s nuclear machine for long. This has also helped North Korean economically survive so far. Further, these Chinese efforts are indirectly dashed the hopes of the reunification of both the Koreas.

The US is literally pressuring North Korea to abandon its nuclear programme. Washington says once it is done, there could be a guarantee of trade, diplomatic relations, aid and normalisation of ties with the rogue state. Though the US and China both are interested in denuclearising North Korea, their approaches to the same goal are completely different. America wants China to use its economic leverage to pressure or convince Kim to abandon it nuclear ambition. Thus Washington officials look at China as a part of the solution but unfortunately Beijing is fast becoming part of the Korean conundrum only. For Xi, the Chinese President, who is now a life-time leader, wants to use North Korea to win brownie points at the domestic front. US President Joe Biden is fully aware that only China can maintain stability in the region if not solve the Korean puzzle for now. Certainly, Beijing will use this opportunity to turn in his favour other vital issues that are constantly pestering Xi, like Hong Kong, Taiwan, Tibet, Xinjiang and South China Sea.

What is the problem with Kim? Kim wants to sustain his family rule. And for him, the nuclear button is the only guarantee for him to maintain both his hereditary regime and to threaten the neighbours and the world. Despite the leverage over North Korea, China and South Korea have failed to bring Kim to a negotiating table. Kim is totally against bringing reforms in his country. As such reform measures might bring down the curtain on his rule. The elites in North Korea know very well that its central problems lie within, not outside. Thus, they, along with Kim, ensure no reform takes place, in order to solidify their control over its impoverished populace.

Clearly, hollow summitry will not work with Kim. He demands serious negotiations on the nuclear front. It is better for Biden to extend grand gestures the way Trump did. At times, Beijing’s bosses have displayed stern attitudes towards Kim Jong-un. But Western nations, particularly, America will never ever believe the intentions of China. Because nowhere Chinese leadership has indicated its commitment towards implementing even the limited trade restrictions over this reclusive nation. And the whole world knows that only China keeps North Korea going and precisely surviving against all odds. Many in the West have accused China of circumventing global sanctions against North Korea.

(The writer an expert on international affairs)