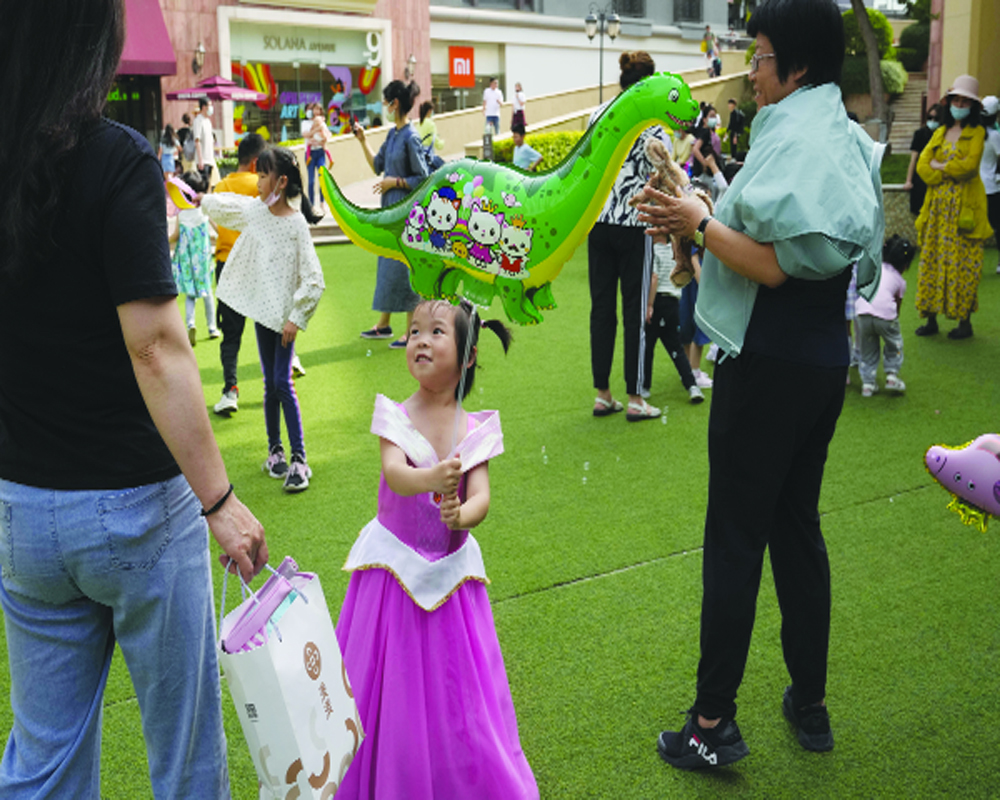 China’s current demographic structure is bringing a new reality to the forefront. The seventh National Census conducted by the National Bureau of Statistics of China (NBSC) in 2020 records the slowest population growth in decades since 1950s. As per the census, China’s population stands at 1.41 billion. It’s an increase of 5.8 per cent that is 72 million people over the population of 2010. The NBSC reports that Chinese mothers gave birth to 12 million babies in 2020, whereas it was 14.65 million in 2019. This indicates that there is a straight fall of 18 per cent birth rate. The fact of the matter is that this is the fourth consecutive drop in the annual birth rate across China. However, these figures do not include the population of Hong Kong and Macau.

The national demographic data released by the Chinese Government in May will have long-term social and economic policy implications across the country. If the current trend of population growth continues, the number of young people will start decreasing and the older generation would increase.

Eventually, at one point, the population will stabilise and start declining.

The thrust of the census is that the country is ageing fast. It also highlighted that the overall population growth of the country is at its lowest in generations and its fertility rate has gone down to 1.3 children per woman.

This is the lowest among countries with similar incomes. Also, it is right below 2.1 that is required to sustain a stable population in such countries. Interestingly, this is a level lower than Japan, which has been experiencing population decline and very rapid ageing.

In a crucial meeting of the Politburo of the Communist Party of China (CPC), chaired by President Xi Jinping, the country declared the historic three-child policy. It announced that it will allow each couple in the country to have up to three children. It’s a marked departure from its two-child policy announced in 2016.

China’s population control dates back to post-Mao party state controlled by legendary Deng Xiaoping in the 1970s. The primary motivations behind coerce population control in China emerged from alarmist writings of the 1970s, mostly published in Europe and America. One such fundamental and acclaimed work was the Club of Rome’s Report called “The Limits to Growth” (1972) authored by Donella H Meadows, Dennis L Meadows, Jorgen Randers and William W Behrens. Also, the historic findings of the study were first presented to the global audience in Moscow and in Rio de Janeiro in the year 1971. The other was the Stanford University biologist Paul Ehrlich’s book known as “The Population Bomb” (1968). Professor Ehrlich cautioned the international community about the high growth of population. He even opined that it was too late to prevent a doomsday apocalypse emerging from the rapid growth of population around the world. The book predicted the coming of famine in the 1970s and 1980s due to overpopulation and other unusual societal upheavals around the same period.

Succinctly, these works issued an urgent call to the international community to limit the growth of population. Also, such writings spread the fear that overpopulation would result in resource depletion and the shortage of the same for all. In the same decade, massive funds released by the UN Population Fund, the World Bank and finally, the Swedish International Development Authority encouraged many countries to adopt strict population control measures.

One such country that immediately stepped into the task was no other the People’s Republic of China. Then China’s top leader Deng introduced the infamous “One Child Policy” to halt the birth rate in the country.

What led Song Jina, a famous scientist, to rewrite the modern history of population science in China was his background in the defence science establishment and his position as an elite scientist of the nation. This gave him the leverage of using cultural, scientific, economic and political resources to redefine the country’s population growth. Thus, he was able to create a new and radical framework to fix China’s population bomb once for all. And his scientific solution called “One Child Policy for All” was accepted in the power corridors of Beijing as the only way out to take the nation from the mess i.e. “demographic impasse”.

However, the reality dawned on the Communist leadership in the middle of the last decade. China officially ended its one child population policy on January 1, 2016. This was done by signing into a Bill allowing all married couples to have a second child. The new policy came into practice in March same year after it was ratified by the Chinese parliament i.e. National People’s Congress.

In March 2017, the National Health and Family Planning Commission reported to the 12th National People’s Congress that live births in national hospitals reached 18.46 million and fertility rate increased up to 1.7 per cent in 2016. And this was recorded as the highest since the year 2000. Even to encourage couples to have two children, the 18th meeting of the Standing Committee of the National People’s Congress reviewed the crucial “Amendment to the Population and Family Planning Law of the People’s Republic of China”.

Afterwards, the new draft of the law brought forth a comprehensive package for the couples to have a second child in the country. Needless to say, in the revised law, the Government “advocated” rather than “allowing” couples to have two children.

The aim of the second child policy was to cope with the country’s ageing population and fast shrinking workforce. By 2018, the new National Health Commission simply took over the responsibility of the task of population management from the National Health and Family Planning Commission. And the once popular phrase “family planning” disappeared from the lexicon of all government transactions.

Today, the new three-child policy is not all about adding up to China’s declining labour pool. It has some other aspects as well. Lack of availability of affordable childcare, rising living costs and gruelling work hours have forced many young couples to abandon the thought and efforts of having another child. Housing is not a problem but lack of working opportunities in some parts of China like the ones bordering with Russia is bothering the young couples to have two or more children. There is again huge shortage of live-in helpers as most of them are migrant workers. That is why it is more expensive to hire a domestic help in China than bringing a foreign one in many other fast-growing and developed Asian metropolis such as Singapore, Hong Kong, etc.

In fact, high labour force participation brings pressure on fertility rates. It has been observed that having a child has a negative impact on women’s wage across China. According to China Health and Nutrition Survey of 2014, about 7 per cent of the women’s wages were being reduced on the birth of every child.

However, the new three-child policy won’t fix China’s economic problems. Its demographic crisis cannot be solved by an approach called “go all out on pro-birth policies”. It’s ridiculous. President Xi Jinping and other powerful leaders in the Communist Party are worried about the country’s existential threat and its clout in the power calculus of the world.

It’s a new challenge for Xi and his regime. A recent survey of 1938 millennials published in March by the Social Survey Centre of the China Youth Daily reveals that 67.3 per cent young people expressed inability to find domestic helps. And this could be one of the main reasons for them not to opt for another child.

Around 61.7 per cent indicated high financial pressure, followed by a lack of safe and adequate nurseries at 54 per cent, higher demand for housing at 41.6 per cent and finally 24 per cent cited the impact on a woman’s career and employment prospects after having one more baby.

At the moment, China needs an adequate and affordable childcare support system to boost its flagging birth rate. And this will encourage young and economically capable parents to think of having more than one child in the days to come. As the country is blighted by a declining fertility rate, the Xi regime needs to think about innovative policy measures to address the woes of the millennials.