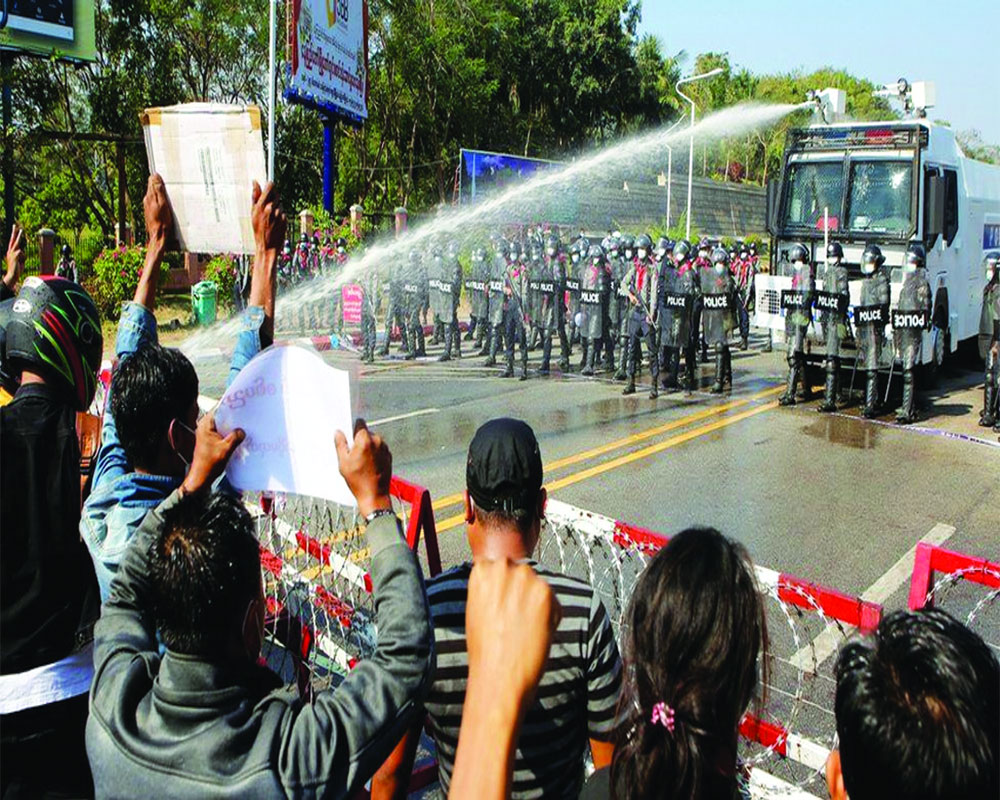 The common Myanmar citizen has seen through China’s game of co-opting the junta back to power, putting its ‘investments’ at risk

The complexity of the societal tinderbox in Myanmar has always been shortchanged for simplistic binaries of “pro-China” or “pro-India” assumptions, whereas the realities have been layered and unobvious. Lazy perceptions that Myanmar’s junta rule (1962-2011 or till 2015 with a dummy civilian Government) was a Chinese borough or, that post-2015 till the 2021 coup, Aung San Suu Kyi’s NLD Government was decidedly “pro-India” are bereft of subtleties and underlying dynamics at play. Fact is, the Chinese were the only major power to support the historical pariah-status junta Government as it brooked no “moral considerations” (like for North Korea or Pakistan), even as the Chinese continued stoking ethnic insurgencies within Myanmar to keep the Tatmadaw (Myanmar’s military) entrapped and beholden to Beijing.

The Chinese ignored international sanctions and supplied the beleaguered junta with weaponry, critical supplies and diplomatic support towards its contentious management of the Rohingya issue. Given India’s “moral insistencies”, New Delhi’s support was more mealy-mouthed and less forthcoming for the junta. Yet, the Generals saw through the Chinese duplicity and realised India’s “moral” conundrum in its restraint — whereas unsaid fears about the controlling Chinese agenda were clearly felt. Yet, popular perceptions of the junta’s preference for China persisted outside Myanmar.

One such Sino-wary Myanmar General was Min Aung Hlaing, who led theatre-level forces responsible for taking on the Chinese-supported insurgent groups in the bloody 2009 clashes — today, Hlaing has taken over absolute power through a military coup! But again, only China has seemingly pitched in favour of the latest junta takeover by calling it “local issue” and posturing neutrality. Consequentially, the optics of China playing court to the junta have gained credence, even as that may not be the wholehearted view shared within the Tatmadaw. But situationally, the junta will have to gravitate towards the Chinese as that remains its only “power option”, despite lurking undercurrents.

Similarly, contrary to public expectations, Suu Kyi’s Government had been extremely accommodative and welcoming of Chinese largesse, involvement and investments. The NLD had signed 38 contracts, worth an estimated $100 billion, towards the China-Myanmar Economic Corridor (much bigger than the China-Pakistan Economic Corridor). So, to assume a linear “pro-India” or “pro-China” position onto either the junta or the civilian Government is facile. Situational reality, realpolitik and stark necessities have defined the preferences

of the prevailing regimes

Now, given the invested stakes in the Myanmar economy (also given the shaky status of the alternative CPEC), the Chinese cannot afford to upset the junta who have re-seized power — so, the amoral Chinese “flexibility” makes it the rare country to defend the junta’s return at global forums. But, for once, beyond the usual compulsions of the Myanmar dispensations to remain ingratiated to China owing to their selfish requirements and lack of viable alternatives, the common Myanmar citizen has seen through the Chinese “adaptability” with the situations, and is increasingly blaming the invisible “Beijing hand” for co-opting the junta back to power.

As the largest lender, trader and sovereign investor in Myanmar, Chinese “investments” are at risk with the brewing public ire. The Chinese Embassy has emerged as a hot spot for protests and murmurs of Beijing building “firewalls” to control the internet and flow of information have gained belief. The international “re-pariahisation” of Myanmar, which traditionally drove it into the willing arms of the Chinese, may not go so smoothly this time, given the public pressure.

In an unprecedented expression of blame game, several Chinese factories in Myanmar were targeted and set on fire last week. These Chinese-funded projects in Yangon’s industrial zone also housed several expatriates, and the local Chinese Embassy issued several SOS and warnings to the authorities and the anti-coup protesters. The Chinese Government’s mouthpiece, Global Times, asked for the perpetrators to be booked and compensation for the destruction. It warned: “Those who maliciously defame China and instigate attacks against Chinese factories are common enemies of China and Myanmar.”

But this time, the Chinese have been caught flat-footed in trying to be too clever by half with their shifty allegiances and known interferences in the internal strife. Neither the pro-democracy civilian parties nor the junta would court China willingly — but because it emerges as the only bailout option in the country, it is always at the forefront of defining Myanmar’s narrative. But perhaps the Chinese have bitten more than they can chew in sanctifying the junta’s return as the citizenry has conflated the anti-coup sentiment with the exploitive and expansionist anti-Chinese sentiment. The international sanctions may not have much impact given that the junta is well versed in such tactics, as also due to the expected Chinese largesse, but the soaked-in-the-blood public perception and expression of the anti-China sentiment offers the almost intractable and unresolvable threat to China’s interests. The Chinese are in a clear conundrum.