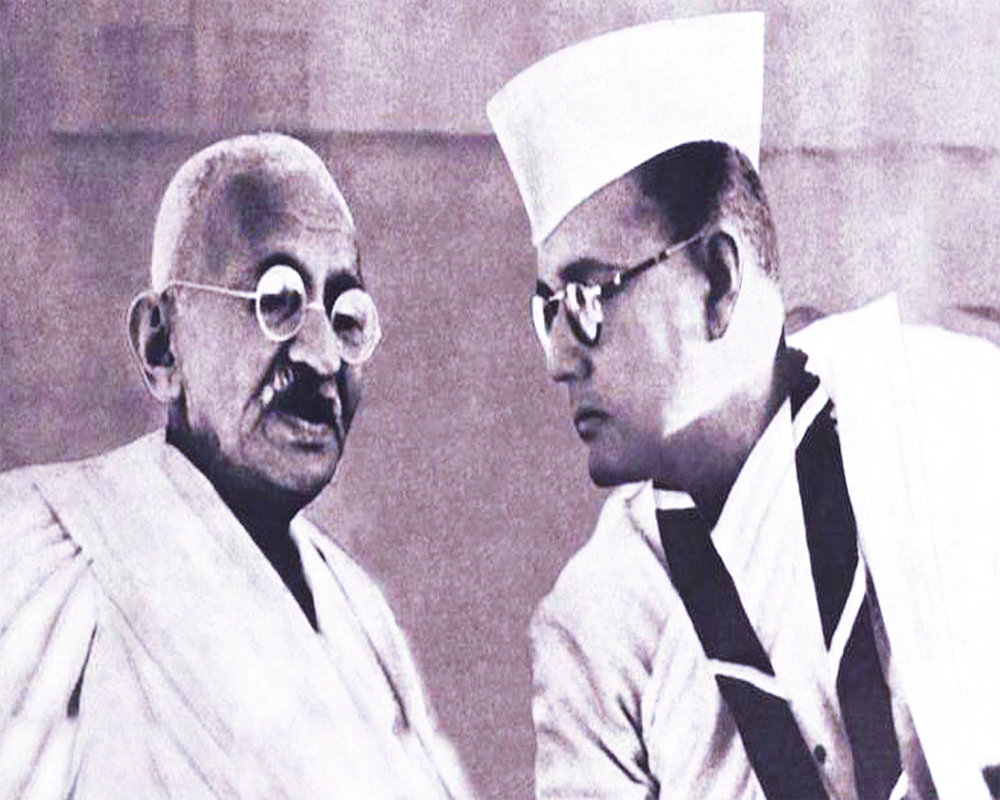 As we celebrate the 125th birth anniversary of Netaji on Jan 23, it's time to give him and the INA their rightful place in the pantheon of freedom fighters

On January 23, India begins year-long celebrations of the 125th birth anniversary of Netaji Subhas Chandra Bose, an illustrious embodiment of courage and commitment. Bose rose as a colossus during the freedom struggle. He was with the Congress Party during 1921-1940, endearing himself to the young and old alike, and was elected its president twice. A brilliant student, he qualified in the ICS examination in 1921 but resigned to serve the motherland. When he met MK Gandhi for the first time in Bombay’s Mani Bhavan, the difference of approach was evident. Before this meeting, Gandhiji had declared that India should get swaraj within a year, and to get swaraj his stipulation was that 20 lakh spinning wheels should start working! The young and enthusiastic Bose also wanted this to happen but was not convinced that spinning wheels was the way. Afterwards, Bose met Deshbandhu Chittaranjan Das, who was to become his political guru. Bose was, right from the beginning, for total independence; no dominion status, no prolonged delays. When the resolution for civil disobedience and the launch of salt satyagrah was being passed in the Lahore session, only one person — who else but Bose — proposed an amendment: It should not be civil disobedience but a parallel government. Narayan Desai puts it in these words: “The greatness of Subhas babu is that though he had proposed the amendment, when the salt satyagrah was launched, he said it was very good. We should put all our strength into it.” This indicates the greatness of his persona, and also how much respect he had for Gandhiji and the party discipline. There were differences that eventually led to what could be termed parting of ways. However, the political maturity and single-minded focus of both on the “target” erased any possible bitterness.

After a couple of years, Bose and Vithalbhai Patel issued a joint statement from Geneva asserting that our country had progressed a lot using non-violence but now it had stopped; hence “a change of leadership is required”! The hint was obvious; it was aimed at Gandhiji. At Gandhiji’s suggestion, Bose was elected the president of the Congress at the Vithal Nagar session.

However, the working committee did not allow him to alter the path. Next year, things were strategically arranged against him but he won the election, defeating Pattabhi Sitaramayya. It was a sad moment in the freedom struggle when Gandhiji wrote that “Pattabhi’s defeat is my defeat”. Bose relinquished the post of the Congress Party president.

The story of differences in approach and attitudes between the stalwarts has certain other dimensions that emerged after Bose’s great escape from house arrest to Afghanistan, Russia, Germany, and then to Japan. He raised the Indian National Army (INA) after successfully igniting the patriotic fervour among Indians in the South-East Asia. He founded the Government of India-in-exile. As Commander-in-Chief of the INA, he entered India from the Burmese border. It was for the independence of India and against the might not only of the British but the allied powers! Of the 60,000 INA personnel, 26,000 — as per the official history — were killed. Maulana Azad, in his book ‘India Wins Freedom’, writes about how Netaji ’s great escape and organisational acumen had impacted Gandhiji, who had different views on Bose: “Gandhiji did not express any opinion about the outcome of the war but, during the discussions with him, I felt that he was becoming doubtful about the Allied victory. I saw that Subhas Bose’s escape to Germany had made a great impression on Gandhiji. He had not formally approved many of his actions, but now I found a change in his outlook. Many of his remarks convinced me that he admired the courage and resourcefulness Subhas Bose had displayed in escaping from India. His admiration for Subhas Bose unconsciously coloured his view about the war situation.” Maulana Azad also mentions how a report (which was later found false) about Bose’s death deeply moved Gandhiji along with the entire country: “He sent a condolence message to Subhas Bose’s mother in which he spoke of Subhas in glowing terms.” Sir Stafford Cripps complained to Maulana Azad that he had “not expected a man like Gandhi to speak in such terms about Subhas Bose”. But India endorsed this tribute as culturally and ethically appropriate from a person of Gandhiji’s stature. India had fallen in love with Bose, had full faith in him, his strategy and the deep wisdom behind alliances, his countrymen endorsed his “neeti” and “niyati” without hesitation. Gandhiji’s message to Bose’s mother was picked up by the media, both nationally and internationally, for the obvious reasons. Louis Fisher, who wrote Gandhiji’s much-acclaimed biography, told him that “all over the world, you have created the impression of being a person on the side of the Japanese”. Gandhiji’s answer must have shocked some of his near and dear ones as well: “Can you show me a greater patriot than him?”

What a great example of mutual affection; one calls him the “Father of the Nation”, the other says “show me a greater patriot”! Is there another such example in contemporary history? Today’s leaders could learn a great lesson from this: You may differ but don’t go against each other. It is indeed necessary to understand the chemistry between the two top heroes of the freedom struggle who had diametrically opposite views and approaches, but each knew how valuable the other was for the nation. There was no let-up in the display of greatness from either side. When Bose was in exile and someone close to him was to come to India, he advised the visitor: “If you have any problem or are confused about something, I have just one piece of advice and that is you should go and meet Gandhiji.” Bose had referred to Gandhiji as “Unhi aamader jater janak”; he is the father of our country.

Recently, India celebrated 150th birth anniversary of Gandhiji; India now prepares to celebrate the 125th birth anniversary of Subhas Chandra Bose. It is time to seriously ponder over the contribution of Bose and the INA in the freedom struggle. Those who claim the mantle of Gandhian legacy and came to power after Independence were, obviously, not as magnanimous as Gandhiji. The way the history of our freedom struggle has been presented to the young and the old could only be cited as “one-sided” and ideologically constrained. Everyone knows what happened to history writing during the past five decades. Now that the official documents exchanged between top-level British officers serving in India are easily verifiable, several new facts and details are emerging which have the potential to put the roles of Bose and the INA in the right perspective.

Was it all only ahimsa, civil disobedience and satyagrah? Was the role of revolutionaries, the young martyrs and the INA insignificant? People have made attempts to demand that history writing be freed from ideological constraints; it must re-examine facts that have been subverted and take note of details available through research, new technology and official documents being made public. An example of how important, relevant and necessary this change is could be comprehended by an incident cited in the book ‘Bose: An Indian Samurai’ by Maj Gen (Retd) GD Bakshi. The final decision-maker on the withdrawal of the British rule from India was UK Prime Minister Clement Attlee. After demitting office, Attlee visited India in 1956 and was the guest of Justice PB Chakraborty, the then Governor of West Bengal. Justice Chakraborty asked Attlee that since the Quit India Movement had fizzled out by 1944, why did the British leave India after the war? Attlee replied that it was “because of Bose’s INA and the mutinies it triggered in the British Indian armed forces”. On what was the role of the Quit India Movement then, “Attlee’s face twisted in a sarcastic smile and he said ‘Minimal’!” Does one need to say more to prove how pivotal was the contribution of Bose and the volunteers and martyrs of INA in expediting the attainment of Independence for India!

In a historic gesture, Prime Minister Narendra Modi is going to inaugurate a national museum devoted to Netaji and the INA in Kolkata. It would be a proud moment for all of us. The Netaji Subhas Bose-INA Trust — a leading national organisation devoted to spreading the message, commitment and courage of Netaji  among the future generations — has grand plans to celebrate the anniversary. Its illustrious chairperson, Brig (Retd) RS Chhikara, repeatedly poses a query: “Why don’t we have a suitable memorial for Netaji  and the INA at a prominent place in New Delhi where visitors from India and other countries could pay their respects to this great son of India and the brave men who laid down their lives at his call?” I have no answer. Could we strive to get one?