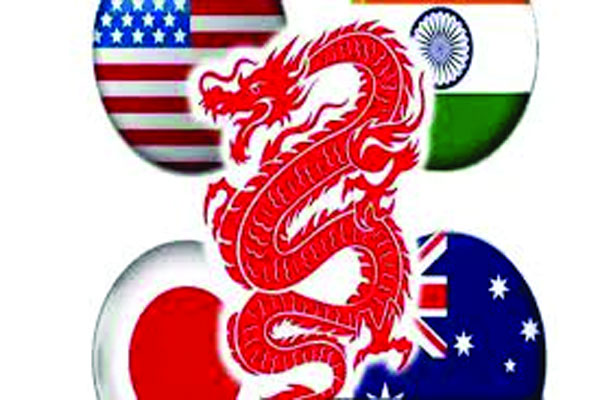 Does the Quad need more robust tactics to contain China's growing influence in the Indo-Pacific region?

The idea of a “free and open Indo-Pacific” was at its core, apart from the anti-COVID vaccine and climate change. But what apparently injected lifeblood into an alliance that has largely remained passive till now is Washington’s belligerence towards Beijing after Joe Biden took over as the US President. Certainly, India supplying its indigenous COVID vaccines to nations across the world has strengthened its position which it seems to cautiously tap to counter its hostile northern neighbour. The US knows well that it’s almost impossible to restrain the increasing Chinese influence without India’s help. New Delhi, too, knows its importance and will do whatever it takes to constrict the fast-expanding economic and military interests of Beijing in the region. Both Australia and Japan, who are coerced by China, particularly in the maritime space, understand the strategic importance of bolstering ties with both India and the US. However, the Quad meeting had only a veiled reference to China which has all along opposed the grouping, claiming that it will lead to militarisation in the region. But the moot question is whether such docile attempts are enough to counter China? Will it work as a real deterrent to Beijing? What will be its repercussions? China will try to counter such efforts diplomatically and on other fronts. Being one of the permanent members of the United Nations Security Council (UNSC), Beijing has the capacity to win favours and dent pliant commitments of any group against its interests.

Prime Minister Narendra Modi has said that the Quad will remain an “important pillar of stability in the region” while Biden mentioned that the group is committed to ensuring that the region is governed by international law and is free from coercion. India and the US seem to have an unequivocal stance against Beijing but it is only in the best interest of the former to tread cautiously as there are no permanent friends or foes in the global order and world diplomacy is a game of opportunism that is driven more by self-interests. Biden hinted to it in his first diplomatic address when he pledged to counter China’s economic abuses and human rights violations but, on the other hand, asserted that he is ready to work with Beijing if it is in the US’ interest. What message does it entail? India must also play its game cleverly, else it would end up serving the interest of the superpower in the Indo-Pacific region at the cost of its own gains. Remember, the US always loves to play the role of a judge who has to never pass a judgment. In case it does, it is used to pronouncing verdicts that suit its ends. It is in the best interest of India to get future-ready for countering China as it might wage a war on several fronts, unlike traditional warfare: Biological weapons, hacking internet services and remote-controlling it and increasing dominance in outer space. Are we prepared for it? As of now, the answers are not so easily forthcoming.