Electric for the few

Electric for the few 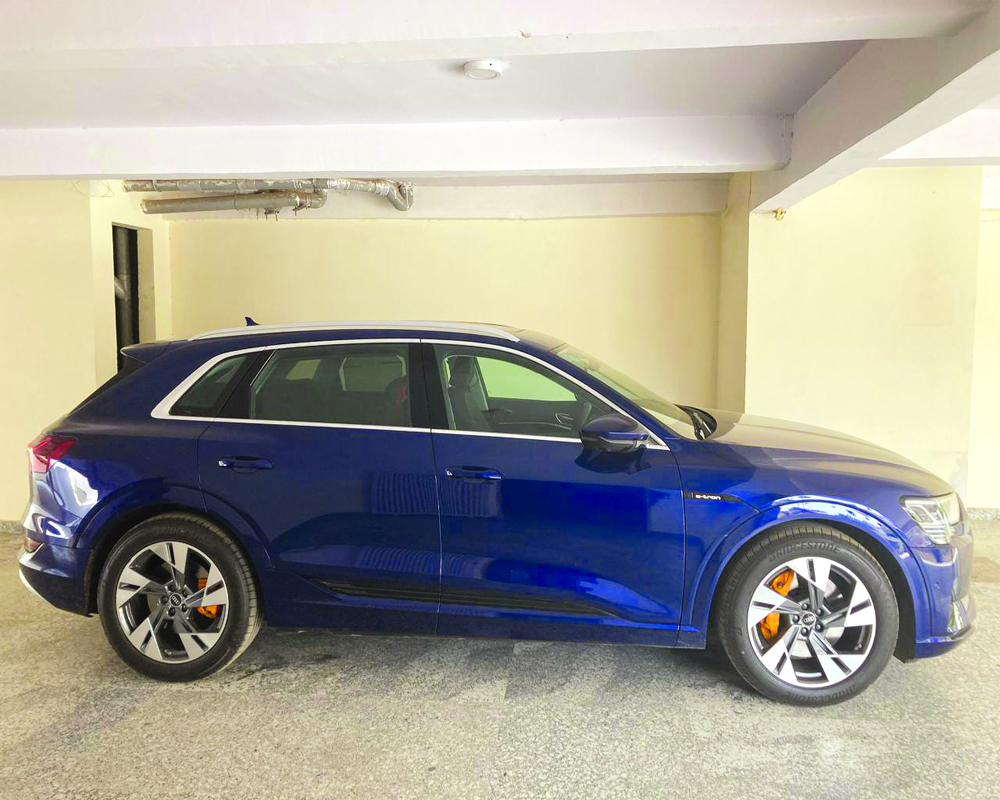 The Audi e-tron is a fabulous vehicle and points at the future. It will, unfortunately, cost a lot

Recently, I got a chance to drive Audi’s latest entrant into the Indian market, the battery-electric Audi e-tron. Based on the long-wheelbase variant of the successful Q5 SUV, this is a wonderful car — quiet, comfortable and with very good vehicle dynamics. But ahead of the price announcement soon, it is also evident that the e-tron will cost over a crore. Almost Rs 30 to 40 lakh more than an equivalent diesel or petrol-powered vehicle. Even with the extremely low running costs, the Audi e-tron driven at normal city speeds in Delhi gives between four to five kilometres per unit of electricity and considering the peak rate for residential power in Delhi at Rs 8.5/unit, this averages between Rs 1.7-2 rupees a kilometre. This compares with an average cost of Rs 8-10 for an equivalent internal combustion-engined vehicle.

But therein lies the problem right? Even with Audi going all-out with a slew of schemes to sweeten the deal for early adopters of electric vehicles, such as installing a free medium-rate charger at home, a 1,60,000 km or eight-year warranty for the battery, and assured buyback schemes, the fact is that at current prices, the savings on fuel do not justify the cost. Just like I predicted in an earlier column a couple of years ago that the era of Rs 100/litre petrol will be upon us soon, and it actually happened sooner than I thought, even if global fuel prices stabilise and indeed fall a bit, fuel prices at the pump will likely touch Rs 120-125 a litre sooner rather than later, and not just in high-taxation states. So even if the savings on running costs touch Rs 10 per kilometre soon, the saving over 1,60,000 kilometers will not even be half the price difference between e-tron and traditional ICE vehicles.

By virtue of being a luxury vehicle, that too an import, it is uncertain that the e-tron will qualify for some of the attractive schemes announced for electric vehicles in Gujarat and Maharashtra recently. Even if it does, it will just be a drop in the ocean on a vehicle as expensive as this. Sure, one expects Audi’s brand ambassador, Indian cricket captain Virat Kohli to be driving one soon, the statement of driving a zero-emissions vehicle is much stronger than the cost savings. The fact of the matter is that for most consumers — even those who can drop a crore on a vehicle without flinching — right now, it makes no sense.

I am not doubting the success and the potential of electrics. I strongly believe now that India can become a leader in electric two-wheelers. Ather Energy, a company in which Hero Motocorp’s Pawan Munjal is one of the largest investors, has already developed some great products. And fellow Bengaluru-based, Ola Electric, has already showcased its first electric two-wheeler. The founder, Bhavish Aggarwal, was seen driving it through Bengaluru one morning in a promotional video. With batteries comprising the bulk of an electric vehicle’s cost, the smaller, possible swappable batteries on two-wheelers, mean a price differential of around Rs 50,000.

Even with the fuel-sipping nature of 100-150 cc engines of such motorcycles and scooters, and current incentives, an owner could possibly make back his additional investment in under four years, possibly even less, if fuel prices continue to rise. If tomorrow, Zomato, flush with funds from its Initial Public Offering, buys 10,000 electric scooters, one will not be surprised and that would be an extremely powerful statement. Similarly, there is an opportunity for battery-electric buses and light commercial vehicles, particularly those that operate inside large metropolitan areas such as Delhi-NCR, Mumbai, Chennai, Bengaluru, and Hyderabad to switch over, especially given that vehicular air pollution is a major problem in such cities. And this can be done through the carrot (incentives) and the stick (regulations).

But make no mistakes, the holy grail for electric vehicles are, and will remain to be, passenger cars. The fact is that India is a price-sensitive market. While mass-market manufacturers like Maruti and Hyundai are considering electric hatchbacks and small SUVs, given the current prices of batteries, making one of those with a decent range would imply a minimal cost differential of around Rs 5 lakh even with the current incentives. A fully-loaded WagonR costs around Rs 7 lakh, but would one pay Rs 12 lakh for an electric version of such a car? Particularly, if it has a range of just 200-250 kilometres on a full charge?

Then you get to the other problem areas of electrics — long charging times and range. That said, one should remember that most private cars are used for commuting, so even a range of 200 kilometres would usually be enough for the entire week. While charging will be a major problem in areas with street parking, for those fortunate to live in apartment blocks and houses with stilt underground parking, this should not be a major issue; although some building bye-laws and electricity board rules concerning resale of power will have to be amended. Audi India fitted a 10kW e-tron charger at my residence, which given the e-tron 55’s 95kWh battery will take it overnight to fully charge, and while you could charge it from a standard 15A plug point, that would take 20-24 hours.

Honestly, I loved the Audi e-tron. With a peak power output of over 300 kilowatts, which is over 400 horsepower, the e-tron can move fast. With big, fat power cables feeding the motors and the instant power and torque of electric vehicles — the e-tron is faster than all but a few SUVs. The battery pack, which is located in the wheelbase of the car, gives it a low centre of gravity that makes even this largish SUV agile like none of its internal combustion engine cousins. You might worry about range and charging times but performance, no sir, that is not a worry at all. I believe Audi India will bring many more electrics into its portfolio soon, maybe even start assembling them in India, making them affordable enough that it won’t be just environmentally concerned actors and celebrities buying them.

Right now, with the e-tron being imported, it really does not make economic sense for buyers. Yes, for the few altruistic buyers who want to make a statement of intent, albeit in luxury, definitely. But for the rest of us, until advancements in battery technology and charging systems come along, which will come just like they did for solar power and flat-panel televisions, buying an electric car is some time away. However, that time is not that far.