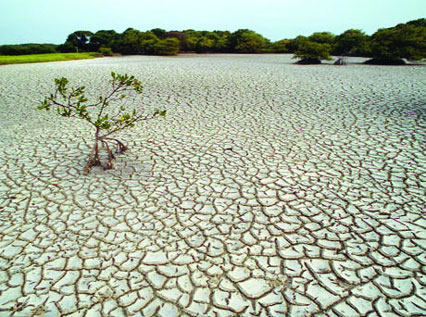 Water and soil are essential for sustaining life on Earth. Each year, the World Forest Day is celebrated on March 21 and, since 1993, March 22 is observed as World Water Day. All across the globe, land, forest and water resources have been degraded due to  overexploitation by humans. Because of the growing population, these resources are under stress and their blatant misuse has made the condition worse. The problem is compounded by the climate change threat that is looming large over mankind.

Forests are essential for sustaining the flow of water in rain-fed rivers, for aquifer recharge and maintaining the level of ground water. Water is the most precious gift of nature but, across the world, over one billion people have no access to safe drinking water and more than three billion people face shortage of water for a few months every year.

Water scarcity repeatedly occurs in areas with scanty rainfall and high population density or in areas where intensive agricultural is practised and those which are heavily industrialised. The countries in Asia and Africa are the most water-stressed, and that includes India.

It seems that the world leaders are only paying lip service as nothing substantial has been done to deal with the water crisis. We must remember that due to climate change and lopsided development, many civilisations, including our own Indus Valley civilisation vanished.

The countries in the Middle East are the most threatened by water scarcity, however, Israel is a brilliant example of how to meet the threat of chronic water shortages. This is because though 90 per cent of Israelis live in water scarce areas, they have solved their problem.

India is one of the top 10 water-rich countries with more than 4,000 Billion Cubic Meter (BCM) of water availability (sufficient to cater to four-five times our current population). However, ironically, as many as 256 districts in the country are facing acute water crisis. It has also been estimated by the NITI Aayog that 70 per cent of our water resources are contaminated and 600 million people are facing severe water stress. It is further estimated that more than 200,000 people die every year due to inadequate access to safe water.

According to a report of the Central Ground Water Board (CGWB) 70 per cent of the blocks in country are water-deficient with respect to the groundwater levels. More than 60 per cent of the farmers depend on groundwater for irrigation. The way the farmers of Punjab, Haryana and Western Uttar Pradesh are utilising ground water, the day is not far when food grain production will come to a standstill in these areas.

The water table is already going down by a few metres every year, especially in Punjab. The Central Water Commission (CWC) has indicated that per capita water availability in the country has already reduced by one-fourth to 1,368 cubic metres a year over the past seven decades. It is also ironical that some of the heavy rainfall districts like Palakkad in Kerala and Hooghly in West Bengal, that witness more than the average rainfall, are water stressed for a few months each year. In Palakkad, it is due to uneven distribution of rainfall and overuse by brick kilns and farmers, while in Hooghly it is due to overuse by industries.

But where there is a will there is a way. Israel has solved its water shortage by building desalination and water-treatment plants and by adopting innovative agricultural practices. Back home, Gujarat has created a people-centric demand-driven approach to solve the potable water problem by creating lakes, de-silting ponds and the use of the Narmada water through the Sardar Sarovar canal network. It tapped every drop of rain water in the farms and as a result the irrigated area of the State has jumped from 38 lakh hectares in 2011 to 68.88 lakh hectares today.

The creation of the Ministry of Jal Shakti in 2019 was to implement and replicate the Gujarat model all over the country. Of the 19 crore households in the country, till 2019, only a little over three crore homes had access to tap water for drinking. In the last one year, another four crore families have been covered. The ‘Jal Jeevan Mission’ has made a mark within one year of its launch and the reasons for its success is the fact that it focuses on decentralised, village-based demand-driven governance by the communities, coupled with innovative technology based on real-time monitoring. Recently the ‘Jal Jeevan Abhiyan’ has been launched to further scale up rain water harvesting and focus is on mobilisation of women groups at the grassroot level.

The larger participation of civil society is the key to success of any Government programme. Before the ‘Jal Jeevan Mission’ the Joint Forest Management was successful because it involved the communities to manage the forests. If the Jal Shakti Ministry succeeds in supplying potable water to every household it will be one of the biggest public welfare programmes post-Independence. It will bring health and prosperity and reduce the mortality rate in rural areas.

The writer is Chairman of the Centre for Resource Management. The views expressed  are personal.