Farewell to Duterte! Many a slip ‘twixt cup & lip

Farewell to Duterte! Many a slip ‘twixt cup & lip 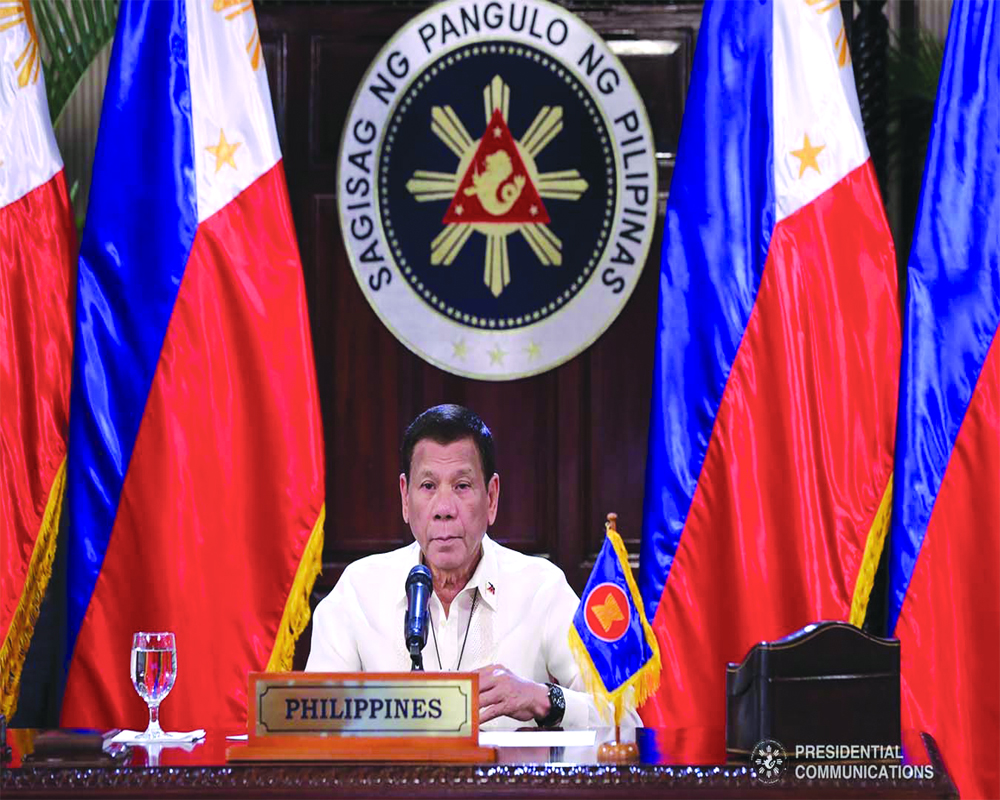 It is widely hoped that ‘Dutertismo’ will soon fade away from the political framework of the Philippines. However, it is not as simple as the opponents might like to think. He has remained impervious to blistering criticism of his blatant autocratic style of governance. Duterte may not exit quietly like his predecessors. Buoyed by massive public support, he might change his mind at the opportune moment. If he clings on to power, his pronounced illiberalism, anti-Westernism and anti-elitism may haunt the populace of the island nation for many more years

Popularly known as Digong and Rody, Rodrigo Roa Duterte, the current President of the Philippines, has just announced his retirement from politics. But last month, the 76-year-old leader had made it public that he would run for the office of the Vice-President in 2022 when he completes the full term of his presidency. But suddenly, he seems to have suddenly changed his mind. As per the current Constitution of the Philippines, a person can serve only one term in the office of the President. Hence, his retirement is normal, but staying away from any other political office is somewhat mysterious. What he told in public is that he will withdraw as “the overwhelming sentiment of the Filipinos is that I am not qualified”. He even said that standing for the vice-presidency “would be the violation of the Constitution to circumvent the law”. Many say that his daughter Sara Duterte-Carpio might run for the office of the President. She is currently serving as the Mayor of the southern city of Davao.

In fact, Duterte skilfully cashed in on the chaos left behind by Benigno Aquino III, who served as the 15th President of the country from 2010-2016. Though there was not much sign of the collapse of the law and order, a systematic crisis of the political system had been developing for a long time. Interestingly Aquino remained popular till the last day of his presidency, but his liberal reformist agenda was not bearing fruit for the masses. Truly, his liberal disposition was sapped of its legitimacy by large administrative bungling and failure to address decades-old structural issues prevailing in the country. Most importantly, he miserably failed to even stop corruption cases that had already taken a full-fledged institutionalised form, and Duterte, the cunning and crude administrator, got a golden opportunity to take over the hot seat in Manila.

What political observers say is that Duterte was in the habit of taking such U-turns in the past. When he was serving as the Mayor of Davao city in September 2015, he once spoke about retiring from public life for good. But in the same year in November, he changed his mind. Incidentally, he was chosen as the candidate for presidency by the PDP-Laban party and he won the election. Therefore, his retirement statement should be taken with a pinch of salt.

The Filipino strongman has left behind a legacy full of controversies. He is known mostly for his populist and nationalist policies. Duterte took over as the 16th President of the island country in June 2016. He set a historic record by becoming the first President from the second largest island of the country, Mindanao. When he assumed office, he promised his countrymen that he will combat the drug menace and reduce the crime rate. But so far, his record is dismal. In turn, he brought one after another chaos to the high-profile office.

Since coming to office, Duterte has waged a brutal and largely extra-legal war against drug users. It has widely made international human rights bodies anxious about his real intentions and the future of democracy in the Philippines. According to the reports brought by rights groups, his controversial move has so far taken the lives of more drug victims than the people killed during the long dictatorship of Ferdinand Marcos from 1966-1986. In the last five years, he has encouraged police to carry out the extra-judicial killing of thousands of suspects. And the critics say that he has termed this as his so-called “War on Drugs”.

Now the big question or irony is that why he is so popular among the common Filipinos despite all the controversies he has created? He has dumbfounded the public in the country. However, behind this popularity, one can definitely count his achievements in these areas: First, he has been successful in reducing poverty and heralding economic inclusion to a great extent. He undertook three major policy reforms known as the Rice Tariffication Law which removed established rice monopolies; TRAIN, i.e. Tax Reform for Acceleration and Inclusion Law that exempted many from hefty income taxes and, the Universal Healthcare Act, which is in fact a socialist act copied by countries like Thailand. However, the health insurance measures were marred by massive corruption charges at the State health insurance agency called PhilHealth.

Second, the campaign against drug users has become hugely popular among the people. Since his coming to power, the Tokhang (slang referring to knocking at the door in search of criminals) has resulted in the elimination of thousands of drug lords and addicts across the country. Third, he came heavily on water and telecom monopolies, ending decades of their unjust dominance. Fourth, the breaking up of age-old media oligarchies like the ABS-CBN Corp of the Lopezes. Fifth, under Duterte, the Philippines achieved the highest ever credit rating in 2020, despite Covid-19 lockdowns. Therefore many look up to him as a saviour and a reformer.

Nevertheless, his term has been regarded globally as a chaos, particularly when it comes to human rights record. He could not control the communist insurgency and the Muslim separatist movement. Rather, the Islamic State kind of organisations has taken a strong foothold through its local associates like the Maute Group, Abu Sayyaf Group, Bangsamoro Islamic Freedom Fighters and Ansar Khalifa Philippines. He has gone a long way in coddling police and military in administration. He has employed more generals and police officers unlike any other previous presidents on the Cabinet and the civilian positions. The most serious failure of his presidency is the mismanagement of the Covid-19 pandemic. Though he had announced one of the earliest lockdowns in Southeast Asia, he could not control the pandemic in the country.

Again, Duterte has been regarded by many as China’s “newest best friend” in the region despite Beijing’s ever growing aggressive posture in the contested waters of the South China Sea. He has set aside all friendly cooperation with its decades-old ally, the US, in Southeast Asia. Besides, he has gone a long way in downgrading the Philippines relations with some of the major powers in the world.

An overwhelming global opinion is that Duterte must resign. He should not try to extend his political career by moving in as the Vice-President of the country in 2022. The Amnesty International, Human Rights Watch, the Catholic Bishops Conference of the Philippines and other organisations have indeed documented his horrendous records of thousands of extra-judicial killings in the last five years. Records show that even children drug addicts have been brutally killed.

Further, when Duterte served as the Mayor of Davao, he was known for running Davao Death Squads, known as DDSs. Many say that these DDS were no other than Duterte Death Squads only. Unfortunately, the so-called DDSs were known for carrying out nearly 1,700 such deaths in the Davao city. When he took over as the President, he moved the very idea of such death squads to the heart of the capital city Manila. Plainly speaking, he took this operation to the national level. Ironically, within four months of the inauguration of his presidency, about 4,000 such deaths had been recorded as per various media briefings. Mostly these drug victims were either killed by police or by unknown secret agents. The saddest part is that more of such killings were unrecorded as the bodies of the drug users were thrown into the ocean or buried in secret sites.

Human rights organisations and the commoners now demand either his resignation or his final formal exit from presidency in the year 2022. Many in the Philippines say that Duterte and his cronies have fattened their long pockets in the last five years of his regime. Further, his goons have widely sowed fear and bloodshed across the country, particularly in the capital Manila, in the name of maintaining law and order. It has turned out to be a system of policing and security just to display his brutality and muscle power.

Duterte is considered as the most polarising of all the Filipino politicians till date. His brash and authoritarian functioning style has truly upended all constitutional machinery in the island nation. Opponents heaved a sigh of relief when he announced his plan to exit the public scene. It is hoped that “Dutertismo” will soon fade away from the political framework of the Philippines. However, it is not as simple as the opponents might think. He has remained impervious to blistering criticism of his blatant autocratic style of governance.

It is hoped that Duterte will not exit quietly like his predecessors. Buoyed by massive public support, he might change his mind at an opportune moment. He may turn to crafty tactics to cling on to power. It won’t be surprising in Filipino politics. However, if at all he stays in power, his pronounced illiberalism, anti-Westernism and anti-elitism may haunt the populace of the island nation for many more years.