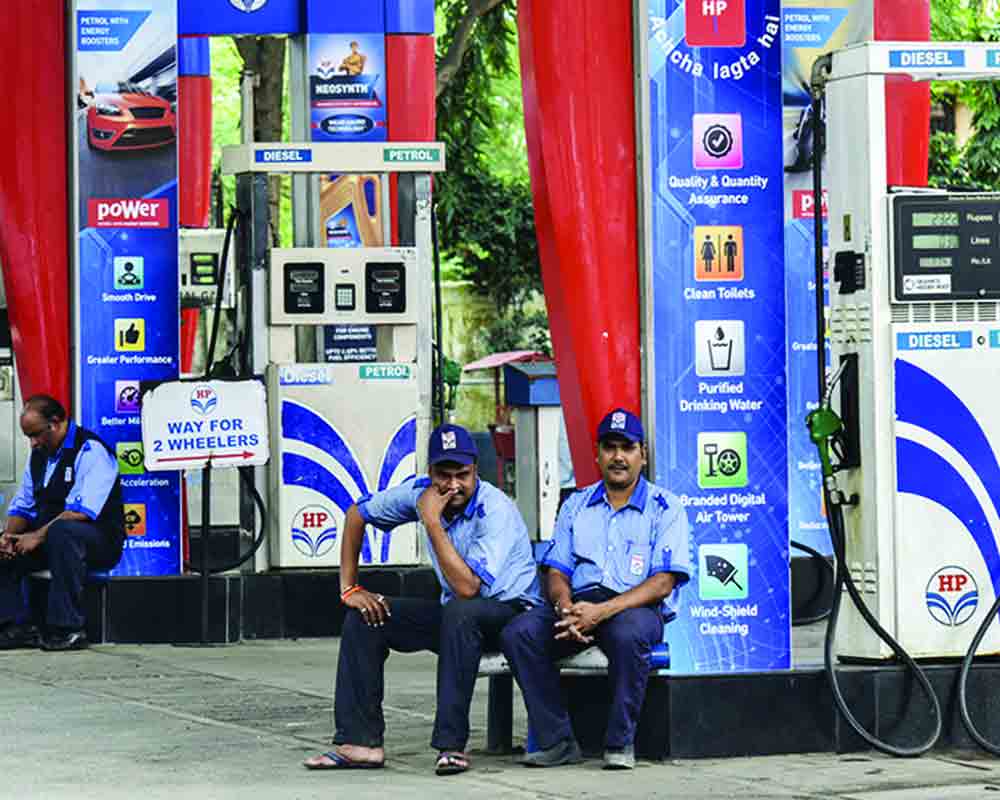 Given the yawning gap between the existing tax rate and the maximum that can be levied under GST (28%), the shifting of fuels to the new regime is impractical

In a recent discussion with economists and industry experts on transition of energy products into the Goods and Services Tax (GST),NITI Aayog proposed a formula for bringing two motor fuels, petrol and diesel, besides electricity under the new regime. Under it,the Centre could keep the two fuels in the highest slab of 28 per cent and electricity in the 18 per cent slab. To compensate states for the loss of revenue resulting from the shift to the GST dispensation - fully in case ofelectricity and partially for petrol and diesel - the think-tank has proposed levying a 50 per cent cess.

First, as per a 2016 Constitution Amendment, petrol, diesel, and electricity (besides crude oil, natural gas, aviation turbine fuel or ATF) are included under GST, but zero rated, meaning that they continue to be governed by the erstwhile dispensation -- while the Centre collects central excise duty (CED), the States levy value added tax (VAT) and other local taxes. Electricity is taxed exclusively by the states. When will these levies be replaced by GST?

Second, under the GST Compensation Act, 2017, the States are entitled to compensation for five years (from July 1, 2017 to June 30, 2022) for the loss of revenue to be calculated as the difference between their actual collection (including transfer of their share in indirect tax collected by the Centre) and the amount they would have got with annual growth at 14 per cent over the 2015-16 level under the erstwhile regime prior to July 1, 2017.

Third, under an amendment to the GST Compensation Act (2018), the Centre levies a cess on supply of demerit goods (those which fall in the highest tax slab of 28%) such as automobiles, tobacco, drinks and so on with a proviso to use the proceeds for compensating states. The cess was to remain in force for five years in sync with the Centre's obligation to compensate States for that period.

The rationale behind keeping these arrangements in place for five years was that at the end of this transition by June 30, 2022, the GST dispensation would have acquired the much-needed "vitality" and "resilience" to yield sufficient resources for the states to meet their budgetary requirements within a prudential limit set under the Fiscal Responsibility and Budget Management Act (FRBM) thereby obviating the need for any extra support beyond this date. With less than a year to go, things have not panned out as expected.

During the first two years of 2017-18 and 2018-19, the situation was comfortable with collection from the cess being higher than the shortfall in tax revenue the states faced. This resulted in a surplus of about Rs 47,000 crore in the cess pool as on March 31, 2019. In the succeeding two years however, it deteriorated with a deficit of Rs 70,000 crore during 2019-20 (this was partly mitigated by using the surplus from previous two years) and Rs 180,000 crore during 2020-21.

The cess has to continue even beyond June 30, 2022 if only to service this huge debt of Rs 270,000 crore (110,000 plus 160,000). Meanwhile, states have also made a representation to 15th Finance Commission to continue thecess for a further 3 years. This means, the GST Council will not only continue with existing cess/levies but also raise them or even bring more items under its purview.

Now, consider the impact of NITI Aayog idea of bringing fuels and electricity under GST and impose a 50 per centcess.

The CED of Rs 33 per litre includes Rs 21due to the Road and Infrastructure Cess (RaIC)and Agri-infrastructure Cess (AIC) which is entirely retained by the Centre. Of the balance Rs 12, it retains 59 per cent or Rs 7 and gives Rs 5 to the states (41 per cent under the 15th Finance Commission or FC devolution formula).On a net basis, therefore, the Centre gets Rs 28 (21+7), while almost an equivalent amount (23+5) goes to the states. Expressed as percentage of ERP (ready to send to petrol pump) or Rs 40, this is 70 per cent each.

If, as per NITI Aayog formula, petrol is placed in the 28 per cent GST slab, the Centre and states will get to tax it at 14 per cent each. As per FC devolution formula, out of its collection, the former can retain only 59 per cent implying that it will have to contend with only 8.26 per cent (14x0.59) even as the latter will get 19.74 per cent (14+14x0.41). The shift to GST dispensation will thus result in Centre’s tax collection plunging from 70 per cent to a low of 8.26 per cent whereas the collection of the states will dip to 19.74 per cent.

Currently, the Centre collects Rs 335,000 crore from petrol and diesel in taxes, while the states collect Rs 203,000 crore (2020-21). One shudders at the very thought of the revenue loss that will result from transition of these fuels to GST. As for electricity,the shift to GST in the tax slab of 18 per cent - implying states getting to tax at nine per cent - will result in huge revenue loss.

The think-tank talks of compensating the loss to states ‘fully’in case of electricity and ‘partially’ for fuels. Partial compensation of revenue loss to states is arbitrary (even this limited relief will be at the cost of strangulating industries which contribute to the cess pool - by imposing 50 per centcess on top of subsisting 28 per cent tax plus cess). Ironically, the proposal doesnot even mention about compensating the Centre which will suffera much bigger loss.

To conclude, the formula floated by NITI Aayog is not practical. Neither the States nor the Centre will accept. Given the yawning gap between the existing tax rate and the maximum that can be levied under GST (read 28 per cent), the shifting of fuels to the new regime is unthinkable. It could be thought of only in a scenario where monthly GST collection reach at least Rs 150,000 crore (currently it is around Rs 100,000 crore). NK Singh, Chairman 15th Finance Commission, feels there is scope for increasing it by 3-4 per cent of GDP. Till that happens, it will be status quo.