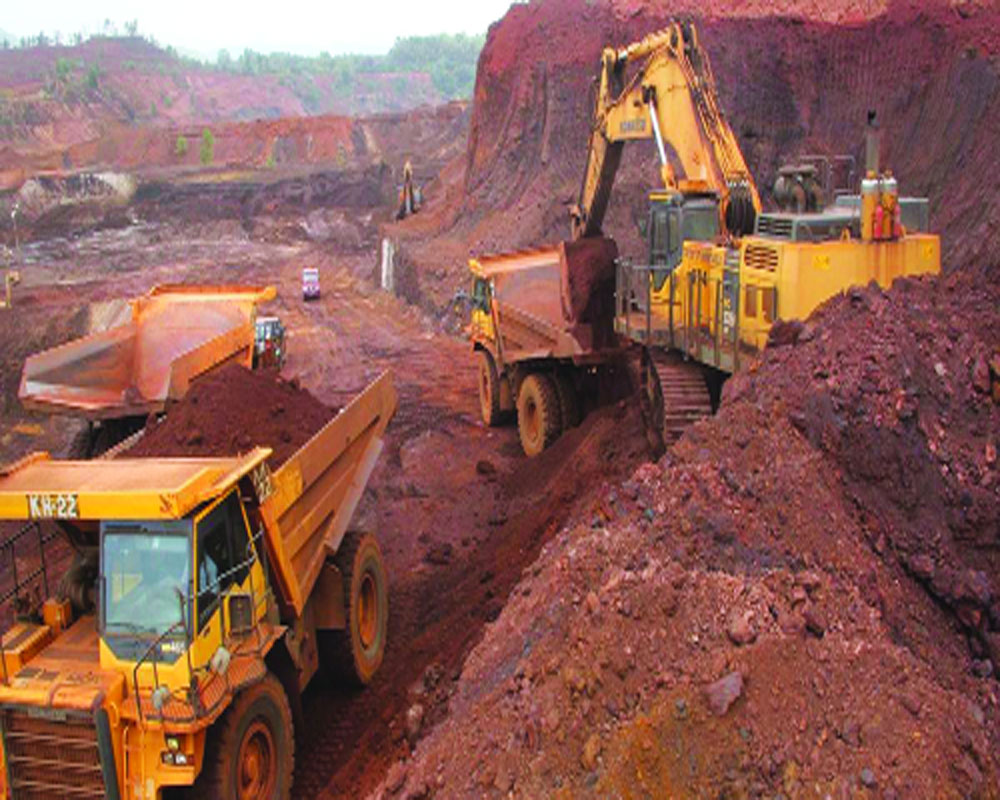 Goa, the smallest State in India, is blessed with abundant mineral deposits such as iron ore, manganese ore, bauxite and so on.  Tourism and mining have been the mainstay of Goa’s economy and these two sectors are the major sources of livelihood for the locals.

Due to the mining stoppage, the State was already faced with the perilous problem of falling revenue and the same has been exacerbated due to the COVID-19 pandemic, leading to Goa witnessing its worst economic crisis. The State is borrowing extra money to the tune of Rs 100 crore every month through the Reserve Bank of India (RBI) in the current financial year to bridge the fiscal deficit which will further add to the financial woes and create a debt crisis in the State.

Mining has been a very important element in the economic history of modern Goa and played a significant role as foreign exchange earner for the nation. Mining in Goa today is synonymous with iron ore mining, which is entirely with the private sector. It has a long-cherished history of systematic and scientific mining and won accolades from different organisations across the globe.

The exemplary “reclamation and rehabilitation” of mined-out areas carried out in some mines in the State has attracted the attention of the mining world not only in India but also globally and used to be referred to by experts on different platforms. However, the low quality of iron ores, coupled with more removal of huge quantity of waste for every tonne of ore production (excessive stripping ratio) and comparatively higher transportation charge as compared to the iron and steel plants located on the eastern coast of India, made it economically unviable to compete in domestic markets and thereby left the Goan miners with no option but to look to the overseas markets. Thus iron ores produced from Goa is exported to various countries like Japan, South Korea, Taiwan, China and others.

Nevertheless, the iron ore mining in Goa is beset with certain problems/ issues like dumping of mine waste/refuse outside the leasehold — due to limited leasehold area and unavailability of non-mineralised area in the mining lease —and use of existing public transport infrastructure for transportation of the iron ore.

Mining operations have been completely stopped in Goa from March 16, 2018, ever since the Supreme Court cancelled second renewal of 88 mining leases in the State vide its order dated  February 7, 2018. It has disrupted not only the mining sector but also the entire ecosystem of allied industries, including individual truck owners, barge workers/owners as well as equipment suppliers, machinery owners, port workers, small garage owners, tea and refreshment selling stall owners and so on.

On the other hand, tourism, which is another full-fledged industry of the State supporting large section of population, also suffered badly due to the pandemic. During the COVID-19  lockdown and even afterwards, the tourism industry has come to a standstill while complete shutdown of mining in the State continues to create unprecedented employment crisis adversely impacting the livelihood of more than three lakh people. Also, it has a direct bearing on the State revenue, resulting in loss of more than Rs 3,500 crore every year as per the State Government estimates.

The State Government has filed a review petition against the order of Supreme Court regarding cancellation of mining leases while some mining companies have also filed petitions before the apex court with respect to the applicability of the “Abolition Act 1987”.

In order to unlock the mining impasse prevailing in Goa, the following multi-pronged strategies   are suggested: The Central Government should come forward to resolve the issue of date of applicability of Goa, Daman and Diu Mining Concessions (Abolition and Declaration as Mining Leases) Act 1987 (popularly known as the Abolition Act 1987).

The Bombay High Court had previously held that the Central Government could only recover statutory dues from 1987 onwards that is prospectively under the Abolition Act as against retrospectively as was claimed.

The Supreme Court should decide clearly on the matter, any other solution is likely to further muddle the situation and would lead to inordinate delays in mining resumption which is likely to aggravate the precarious financial condition of Goa and its people.

There is little hope of revival of tourism industry in the State till the time COVID-19 pandemic recedes. This makes it imperative to take immediate corrective actions to find a solution to the Goa mining crisis and prevent further loss to the State’s  economy.

The socio-economic impact of mining ban in Goa may lead to a serious humanitarian crisis if there is any further delay in finding a timely solution to the current stalemate.

The writer is the Chairman, Mining Engineers’ Association of India (MEAI)-Goa Chapter. The views expressed are personal.