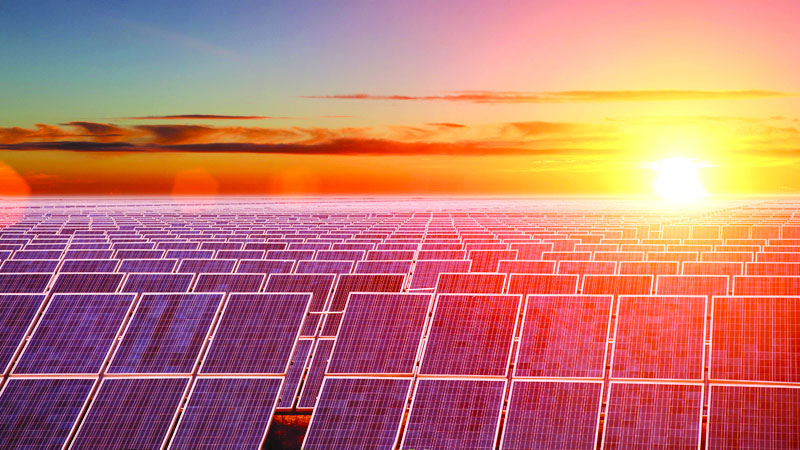 The Budget left the renewable energy sector feeling let down as not only have its requirements not been met but some existing benefits have been taken away, too

In a country where the Sun is worshiped, solar power is justly considered the energy of the future. Solar power’s abundant availability in India not only ensures scalability but also bolsters our energy security. India can generate 748 GW of solar energy provided three per cent of the waste land is covered with solar photovoltaic (PV) modules. Pursuing this goal is the Government’s National Solar Mission (NSM) which is mandated to develop India as a global solar energy leader. The NSM’s purpose is to install 100 GW grid-connected solar power plants by 2022 and assist India to realise the Intended Nationally Determined Contributions (INDCs) target of achieving 40 per cent cumulative electric power installed capacity from non-fossil fuel-based energy resources and to reduce the emission intensity of its GDP by  35 per cent by 2030.

But these lofty ambitions do not match the developments on the ground and the slowdown in capacity addition in recent years is a proof of the same. The cause of this sluggishness is the presence of a variety of unaddressed hurdles that have been allowed to grow by a lethargic Government policy regime. This is further evident by the state of PV cell production which is yet to become truly competitive. Adding to these challenges are the transmission losses at approximately 40 per cent, which make solar power generation highly unfeasible. These conditions are further made worse by the scarcity of per capita land availability in India, especially near substations for exclusive installation of solar cells.

On the other hand project costs are increasing, debt is mounting while nearly a third of the 23,600 MW renewable power projects, won by various players after quoting the lowest rates in reverse auctions conducted by the Solar Energy Corporation of India (SECI) for the Inter-State Transmission System (ISTS), are staring at an uncertain future as the agency has not yet found buyers for power from these solar/wind energy generation units.

There are systemic issues as well. For instance, on the supply side the main grouse for solar power suppliers are the rock bottom tariffs which are among the world’s lowest. On top of this, State governments insist that companies sell power to discoms at cheap prices which hurts these firms’ profit margins and negatively affects focus on quality and innovation. Low tariffs combined with chronic delay in payments mean that even the banks become reluctant to lend to these firms, because they are unsure of profit sustainability. The lack of Government intervention in these conditions is disturbing enough but what makes it even more concerning is when State Governments renege on the terms of Power Purchase Agreements (PPA) and demand tariff renegotiation at the time of payment. These unhealthy practices must be curtailed by the Centre if the solar power sector is to flourish. The recently-announced  Budget was a fantastic opportunity to address these concerns and put the sector firmly back on track, but somehow that did not happen.

The Budget left the renewable energy sector feeling let down as not only have its requirements not been met but some of the existing benefits have been taken away, too. An unwelcome change in this regard relates to the custom duty for machinery, instruments, appliances, components or auxiliary equipment, including those required for testing and quality control of solar power generation projects, which was capped at five per cent previously. This exemption has been taken away. Developers would now be burdened by the increased costs of import and this would also lead to litigation under the PPAs for change in law claims.

Instead of a lacklustre attempt to support the solar power industry, the Government would have done well to address the challenges. The complexity of the subsidy structure and involvement of too many agencies, electricity boards and the electricity regulatory commission makes the development of solar PV projects difficult. The Budget should have demolished all these complex structures and focused on critical issues such as financing, which is a major issue for PV manufacturers.

The Government should have installed a robust financing infrastructure, models and arrangements to spur the PV industry and consumption of PV products, besides training and development of human resources to drive industry growth and PV adoption.

This would have had a positive cascading effect and improved intra-industry cooperation for expanding the PV supply chain as well, which would have contributed in lowering costs.

Additionally, the Centre could have focused on the need to build consumer awareness about the technology, economics and right usage of PV products and modules. At the manufacturer end, the awareness could have been driven by sharing technical information through conferences and workshops, in collaborating with balance of systems manufacturers and in gathering and publishing accurate market data, trends and projections. Finally, the  Government should have linked the solar energy targets with  ‘Make in India’, the ‘Smart City Mission’ and ‘Digital India’. This would have given this promising sector a fresh perspective and ensured the development and transformation of the entire renewable power system in the country.