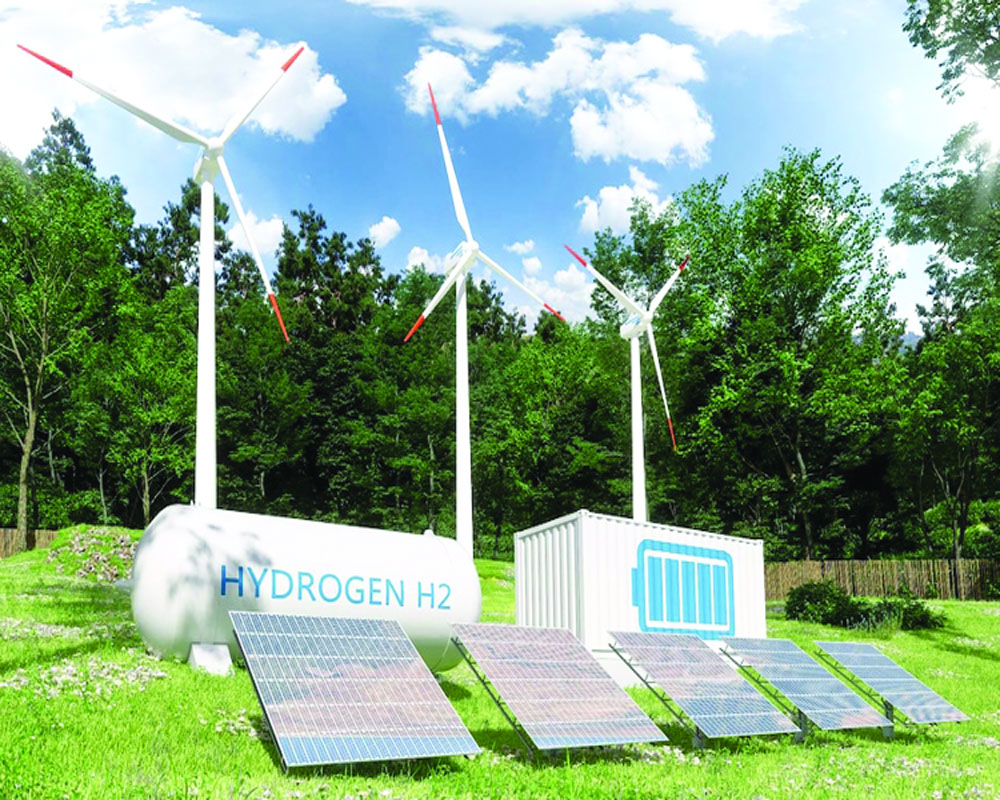 In the relentless pursuit to power the world of tomorrow, humanity is tirelessly involved in its quest to discover newer fuels that are cleaner and more efficient. The express reduction of carbon content of the planet by the year 2050 is now the major focus area for nations across the globe. In order to achieve this, decarbonising the production of an element like hydrogen by giving rise to Green Hydrogen (GH) is one of the keys as this is currently responsible for more than 2 per cent of total global carbon dioxide emissions.

An efficiently harnessed GH can not only help get a grip on the current level of emissions, but also sustainably power the future. The global population is growing at a robust rate of 1.1 per cent per annum or increasing by 83 million people every year, this intense human proliferation has had a tremendous impact on energy demand.

According to the latest estimates provided by the International Energy Agency (IEA), the increasing amount of watts required for a human will mean that global energy demand will increase by 25 per cent-30 per cent by 2040. For almost all economies surviving on fossil fuels, this would mean the generation of more carbon dioxide which, in turn, will exacerbate climate change. Unless clean fuels such as GH are developed as sustainable alternatives, the efforts to limit the rise in global warming to under 1.5°C would be untenable.

Hydrogen is a universal, light and very reactive fuel that is generated through the chemical process of electrolysis. Electrolysis utilises electric current to separate the hydrogen from oxygen in water and if this electric current is obtained from renewable sources, GH is produced without emitting carbon dioxide into the atmosphere. The IEA studies show that this method of obtaining GH would save the 830 million tonnes of carbon dioxide that are emitted annually when this gas is produced using fossil fuels.

The scale of interest being generated for GH can be gauged by the fact that a traditionally fossil fuel driven nation such as Saudi Arabia has taken robust initiative to adopt GH in its energy mix. The kingpin of crude oil-producing nations in a surprisingly welcome development has announced the establishment of a mega $5 billion GH manufacturing unit, the size of Belgium, in the north-western part of the country. Saudi Arabia with average summer time temperatures hovering near 50°C is an energy guzzling nation that uses oil to fuel its power sector. A study by the Riyadh-based Joint Organisation’s Data Initiative showed that every year the month of August peaks in energy demand when the nation witnesses an average consumption of 7,26,000 barrels of oil a day for energy generation.

According to the British Petroleum PLC’s latest World Energy Report, Saudi Arabia consumed 322 giga-joules per person in 2019, more than four times the global average and almost triple the figure for Europe. The nation apparently realises its dependence on fossil fuels and hence its strategic move towards GH. The BloombergNEF estimates that GH is expected to command a market value of nearly $700 billion by 2050, but currently the cost of producing this energy is high.

According to  the International Renewable Energy Agency (IREA), the per kilogram production cost currently of GH is $5. However, for nations such as Saudi with perpetual sunshine and vast unused land, the per kg production cost can be brought down to $1.50 by 2030.

In addition to Saudi, other nations such as Germany, Spain, Britain and China have increased the pace of developing GH production capacity.

In times such as these, India needs to take immediate steps to catch up with the world and do its bit to decarbonise its economy by adopting GH in a large-scale manner. In November 2020, Prime Minister Narendra Modi proposed a comprehensive National Hydrogen Energy Mission and building on the same, this year’s Budget saw a reference to the proposal for a Hydrogen Energy Mission 2021-22 to generate hydrogen from green power sources.

As the Government takes its own time to make progress, a beginning of sorts has already been made in the private sector recently with the collaboration between NASDAQ-listed Fusion Fuel Green and Chennai-based BGR Energy Systems. The tie-up will enable the use of proprietary technology of fusion fuel to generate hydrogen using solar energy and undertake GH energy projects across India.

GH is scalable, sustainable and storable and with India’s target to generate 450 gigawatts of its energy from renewable sources by 2030, the nation needn’t look any further as  it provides the apt solution to achieve the same.