Hawks cash in on Israel-Hamas war

Hawks cash in on Israel-Hamas war 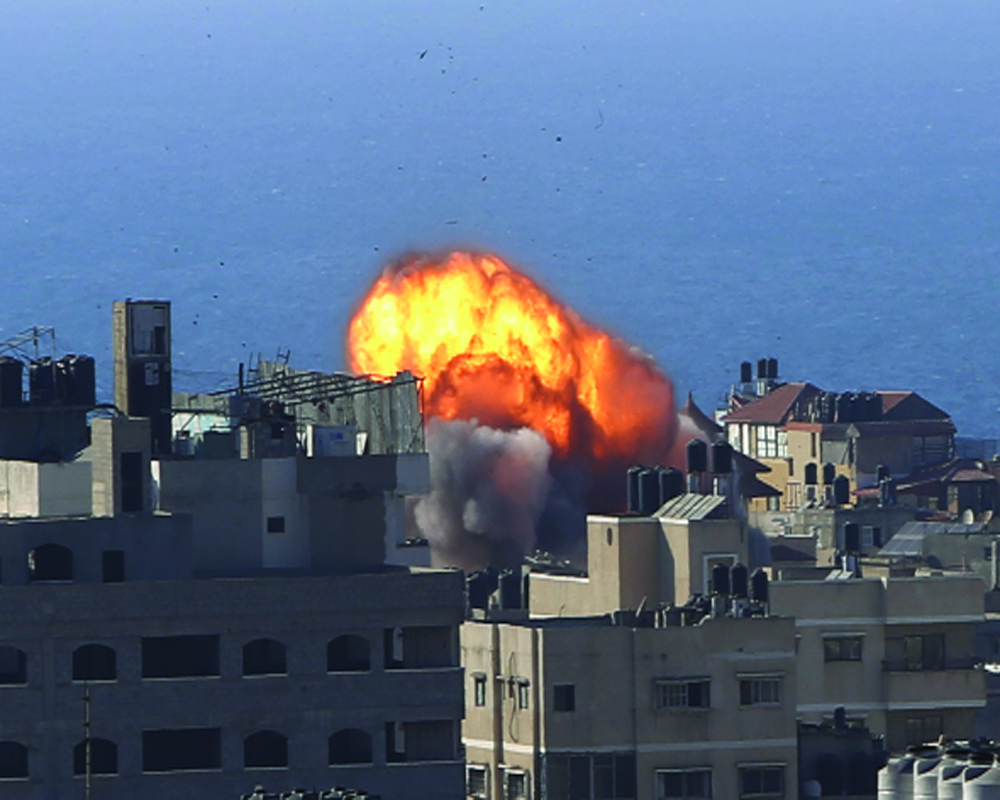 Tel Aviv’s concerted efforts to evict ‘illegal’ Palestinian settlers from East Jerusalem and Hamas’ ceaseless attempts to destroy Israel and Jews are the biggest hurdles in arriving at a peaceful solution. The ongoing war offers the hawks from both sides the much sought-after opportunity as they have some political axe to grind

Gaza has once again grabbed the headlines. In East Jerusalem, blood-stained streets and smoldering tyres are telltale signs of a gory fight between the Israeli security forces and the Hamas. The region is witnessing the worst violence since the 50-day war that took place in 2014. Today, the bitter truth for Israel is that Hamas, an Islamic militant group, controls the sensitive Gaza region.

Palestinians live under Israeli settler colonialism. Their fear is based on experience of torture, daily bout of humiliations, constant denial of basic freedoms, absence of dignity of life, living and labour, imprisonment and finally maiming and killing. So it is very natural that every Palestinian born there will have the basic instinct to fight against the Israeli occupation. The hatred is growing towards Israel and its security forces. And if it goes like this for any longer, war-like situation will be a daily affair.

The moot point is what Israel wants? Israel wants total control over East Jerusalem. The current conflict has emerged because of the forced expulsion of Palestinian families from the occupied East Jerusalem neighborhood of Sheikh Jarrah. Some sources say the lands occupied by these families were originally under Jewish ownership. But the Palestinians see this as an extension of an Israeli policy to displace as many Palestinians as possible from Jerusalem. The final aim is to reclaim and retain a majority Jewish identity in the city.

Will Palestine ever get the desired independent land? No, at least for the foreseeable future. It must be said here that the struggle and jehad for Palestine will continue. The Islamic resistance movements like the Hamas, meaning strength, will keep challenging the very identity of the Israeli state. In fact, the Hamas Covenant which consists of 36 articles clearly highlights how the group will take the Islamic movement further. Article 15 of the Covenant says that the jehad for the liberation of Palestine is an individual duty.

It says, “The day that enemies usurp part of Muslim land, jehad becomes the individual duty of every Muslim. In face of the Jews usurpation of Palestine, it is compulsory that the banner of jehad be raised. To do this requires the diffusion of Islamic consciousness among the masses, both on the regional, Arab and Islamic ummah levels. It is necessary to instill the spirit of jehad in the heart of the nation so that they would confront the enemies and join the ranks of the fighters.”

Palestinians have resisted Israeli occupation and colonisation for decades now. Anger on the Palestinian street has grown. People are raising the banner of protest against Israel. They claim that Israel is making concerted efforts to erase the Palestinian identity from the land.

For now, Tel Aviv has rebuffed any discussion for ceasefire. It vows to continue the offensive. Benjamin Netanyahu, the Prime Minister of Israel, is in favour of stepping up its Gaza strikes. He said, “At the conclusion of a situational assessment, it was decided that both the might of the attacks and the frequency of the attacks will be increased.”

He also commented that “Hamas and Islamic jehad paid… and will pay a very heavy price for their belligerence… their blood is forfeit”. This indicates that Israel will continue its offensive. There is a possibility that this will add fuel to the fire over the decade’s long crisis in West Asian region.

The spokesman for UN Secretary General Antonio Guterres said he is saddened by the increasingly large number of casualties, including children, from Israeli air strike in Gaza and of Israeli fatalities from rockets launched from Gaza. He called for maximum restraint by the Israeli security forces. The UN has warned that the planned expulsion of the Palestinian families from East Jerusalem by Israel could amount to war crimes. But it also lashed out at the Hamas for the indiscriminate launch of rockets and mortars towards Israeli population centres.

Meanwhile, the US postponed a UN Security Council meeting on the ongoing flare-up between Israel and the Hamas for the next week. The discussion was supposed to take place this week, but the US is trying to make room for diplomacy so as to avert the worst situation in the contested Gaza territory. The US, a key ally of Israel, has confirmed on multiple occasions that the latter has the full right to defend itself as the terrorist groups from Gaza have launched about 1,750 rockets into its territory. However, US Secretary of State Antony Blinken has brushed aside all speculation that Washington is trying to torpedo the crucial talks altogether. President Joe Biden said, “One of the things that I have seen thus far is that there has not been a significant overreaction.”

Around the same time, Israel has been pummeling Gaza with air strikes, levelling buildings leading to killing of dozens of people. Biden has already touted Israel’s right to self-defense amid rocket attacks from the Hamas that have killed dozens of people. Thus the White House clarified that Jerusalem must be a place of co-existence.

The European Union, a group of 27 nations, too has criticised the Hamas for the war, by saying that Palestinian rocket attacks on Israel were totally unacceptable. And the EU called on all sides to aim for de-escalation and to prevent more civilian casualties. At the same time, EU foreign policy chief Joseph Borrell condemned eviction of Palestinian families in East Jerusalem.  He also called the evictions illegal, saying it only serves to fuel tensions.

However, Iranian Supreme Leader Ayatollah Ali Khamenei, a known bete noire of the Israel state, said “Zionists understand nothing but the language of force, so the Palestinians must increase their power and resistance to force the criminals to surrender and stop their brutal acts.” Meanwhile the 57-member group of the Organization of Islamic Cooperation voiced its concern over the deteriorating security scenario in East Jerusalem.

Now, as international call for restraint has been raised, both the Hamas and Israel must understand that they are simply killing innocent civilians. War is not the solution to the land problem. The current crisis is only offering the radical elements on both sides a chance to advance their agenda.

The massive deployment of ground troops by the Netanyahu Government on the border signals a broader offensive in the coming days. Moving armed forces near Gaza raises the possibility of an invasion and a bloody war. The Israeli Defence Forces (IDF) is preparing for all kinds of eventualities and an escalation at the moment. Such deployment of forces took place only in 2014.

As the war continues, global media reports that most of the rockets fired by the Hamas are being blocked by Israel’s Iron Dome Defence System. However, some of the rockets that got through the superior defence circuit killed only a few people on the side of Israel. On the other hand, the attacks launched by Israel through its air force over Gaza have been more deadly, with a reported death toll over 90 so far. The Iron Dome is designed to selectively deal with rocket attacks. And also this system intercepts those enemy rockets that head for populated areas. The IDF claims that the Iron Dome is around 90 per cent effective. However, the sources say even a high probability intercept rate can make the Hamas efforts to destroy populated areas purely ineffective. It is to be noted here that the Iron Dome system was made with American finance.

The constant struggle for Palestine to establish its sovereign identity has become a permanent irritant for Israel. On the other hand, Israeli attempt to maintain its status quo and further expand and also to evict illegal Palestinian occupants (according to Tel Aviv) from East Jerusalem foment an ever greater war in the region. The Hamas wants the Jews dead and the state of Israel eliminated. For them, it is not about Israel, but this is ultimately about the Jews.

Today, situation in East Jerusalem is terribly unnerving. It is time for the Israeli garrison state to talk peace. The Hamas, only by working as a proxy, will find it really difficult to bring a solution to the Palestinians. Only result would be death of civilians. And the hawks will be happy. When the deadly, Covid-19 is killing millions across the globe, Tel Aviv and the Hamas must not venture out to take more lives anymore.

(Dr Makhan Saikia has taught political science and international relations for over a decade in institutions of national and international repute across the country after specialisation in globalisation and governance from Tata Institute of Social Sciences, Mumbai. He is the chief editor of the Journal of Global Studies, an international research journal)