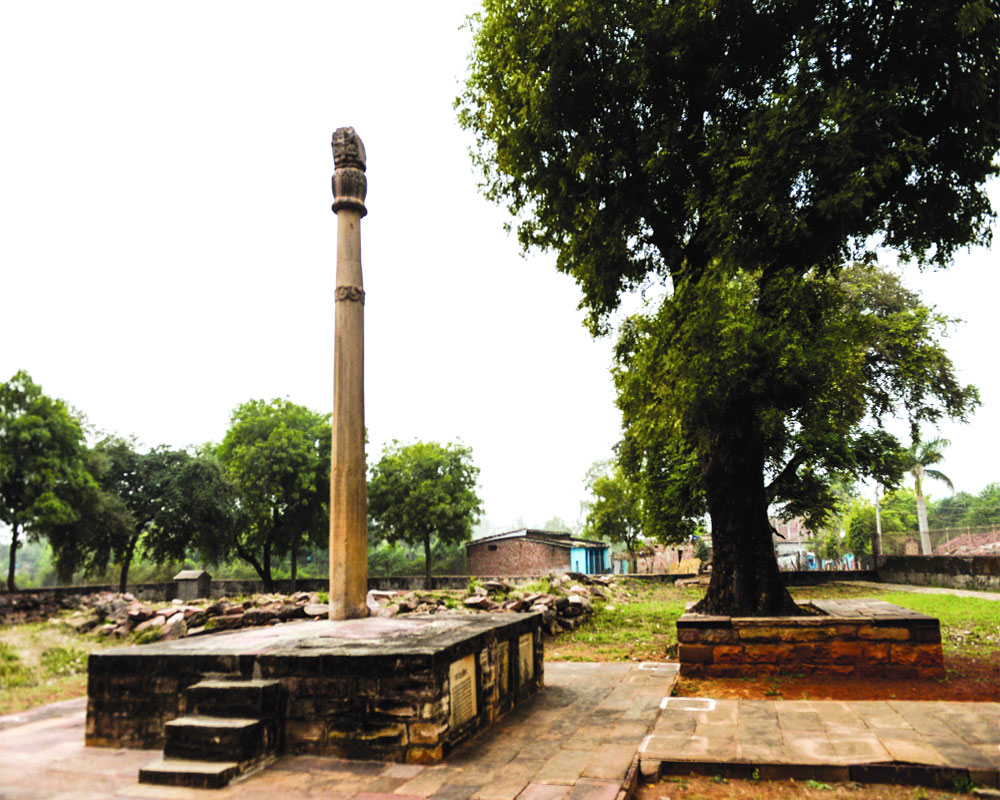 The 2,000-years-old column documents an important chapter in the history of Takshashila

The town of Vidisha in Madhya Pradesh is most famous for being ‘Mamaji’s Home’ — Mamaji being Shivraj Singh Chauhan, the Chief Minister of the State. Even in a relatively lower population density area, the alleys of Vidisha are narrow and once inside, one would not know whether one is in Madhya Pradesh or a city in the Gangetic plains. Manoeuvering a car inside these crowded streets requires not just the immense skill that a lifetime of driving on narrow Indian streets brings one, but also a yogic sense of patience and calm to stop worrying about handcarts, cyclists, scooters or even other cars bumping and grinding against one’s own. On this front, the all-new Hyundai i20 that we were driving was a fabulous vehicle.

The reason I was stuck in Vidisha’s narrow alleyways was because I wanted to visit the legendary ‘Khamba Baba’. As you cross the Betwa river, on a narrow but modern bridge, to leave the town of Vidisha, having been guided through its anaj mandi (grain market), you reach some small hutments, buildings rather than slums, but not necessarily a middle-income area if the ubiquitous cow-dung patties are any indication. There, in the middle of all this, is a small park besides the river. A park with a pillar, that does not seem extraordinary at first.

So what is this pillar all about? For one, it is over 2,0000-years-old and it celebrates the conversion of Heliodorus, the Ambassador for the Kingdom of Takshashila, one of the many Indo-Greek kingdoms mainly centred around the region that we know as (undivided) Punjab today. These kingdoms were left behind in the midst of Alexander, The Great’s final eastern conquests. Many of his generals, officers and men remained behind, and divided up the territories after his death. I should know all this, because being blessed with the name Kushan, I am named after the ruler of the largest and most successful of the Indo-Greek kingdoms.

Takshashila’s king Anticlidas had sent Heliodorus to the court of King Bhagabhadra of Vidisha and upon his arrival, according to the deciphered Brahmi script on the pillar, Heliodorus became a worshipper of Vishnu. Of course, one should remember that in times past, there was much more religious fluidity than today, particularly given that most polytheistic religions had more similarities than differences.

According to the translation of the Brahmi script on the pillar, it reads: This Garuda column of Vasudeva (Vishnu), the god of gods, was erected here by Heliodorus, a worshipper of Vishnu, the son of Dion and an inhabitant of Taxila who came as Greek ambassador from the Great King Antialkidas to King Kasiputra Bhagabhadra, the Savior, then reigning prosperously in the fourteenth year of his kingship. Three important precepts when practiced lead to heaven: self-restraint, charity, conscientiousness.

What is truly amazing about this pillar is that it survived. There must have been hundreds of such pillars across India. Maybe in ancient times, pillars were raised just like foreign dignitaries plant trees nowadays. When it was ‘rediscovered’ by British archaeologists in the late 1800s, the importance of the pillar was first ignored. It was only as British archaeologists got more involved into Indic culture than they realised the importance of the pillar. The pillar had become a temple of sorts for a local ‘Baba’ (holy man) and locals had venerated the pillar, not quite knowing of its historical importance yet that respect ensured that the pillar was not destroyed. That and, possibly, the fact that Madhya Pradesh is not as densely populated as the plains and given its riverside location the pillar was particularly venerated by fishermen. The pillar and the Baba, which is why locals call it the ‘Baba Khamba’ (Holy Man Pillar), survived and the Baba performed an annual exorcism on a nearby tamarind tree by driving in a nail to predict how the coming year would be. The Baba also agreed to shift from the site and the pillar was largely restored although the annual exorcism ritual still takes place.

What is fascinating is that the pillar is just so incongruous where it lies. There are other broken bits, maybe from other pillars or ancient monuments scattered around the park. And as I walked in, the guard hired by Madhya Pradesh Tourism was about to lock up but he was friendly so he let me in and explained a bit about the pillar and the tree to us. He shared that thanks to the pandemic, the previous year wasn’t a good year, maybe 10-20 tourists visited on a regular day, halting off at this pillar on their way between Sanchi and the Udaygiri Caves or some other historical site in this region as central Madhya Pradesh is literally littered with tens of such amazing sites.

This is also a reminder that there is history, sometimes, as interesting as this one. While we visit ancient sites across the world, we must make it a point to recognise our own history like this pillar. We could visit it, all thanks to Hyundai’s Great India Drive that lets us explore this great nation.