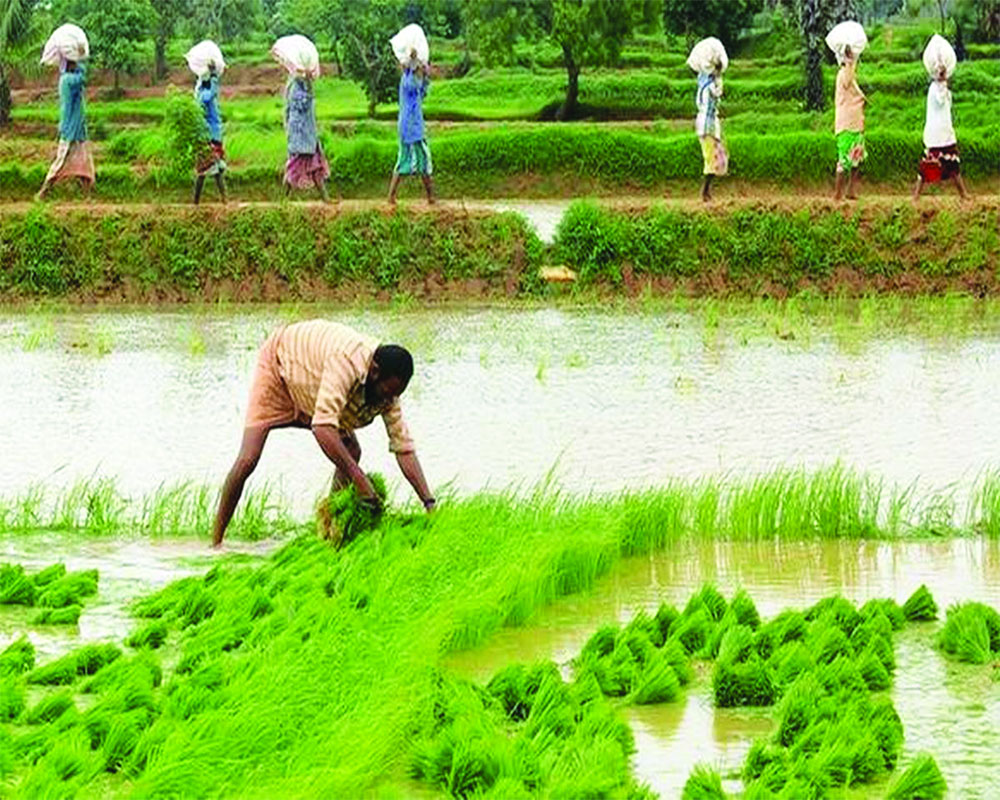 The Government may consider DBT to farmers; India can give it without any cap and yet remain compliant with its commitment under the WTO

At the Trade Policy Review (TPR) meeting held at the World Trade Organisation (WTO) in January, India insisted that a permanent solution for public stockholding to serve the food security objective special safeguard measures (SSMs) to prevent import surges and elimination of unfair farm subsidy entitlements of some members should be taken up on a priority basis for any farm deal that may be worked out at the 12th WTO Ministerial Conference (MC-12) scheduled to be held from November 29.

For about two decades, India has been taking up at the WTO these core agriculture issues that are of concern to developing countries, under what has come to be known as the Doha Development Agenda (DDA). However, it has not met with any success. In fact, at the MC-10 held in Nairobi (December 2015), developed countries led by the US and the European Union (EU) literally junked the DDA. Whether or not MC-12 will yield the desired outcome, we will have to wait and see. Meanwhile, there is a need for introspection as to where did things go wrong?

Under the Agreement on Agriculture (AoA) of the WTO, a developing country cannot give aggregate measurement support (AMS) — an acronym for subsidies — in excess of 10 per cent of the value of its farm production. For developed countries, the threshold is kept at five per cent. The AMS includes “product-specific” subsidies and “non-product specific” like subsidies on agricultural inputs such as fertilisers, seed, irrigation and power. The “product-specific” subsidy is in excess of the Minimum Support Price (MSP) paid to farmers over the External Reference Price (ERP) multiplied by the quantum of agri-produce. Whereas the MSP is taken for the relevant year, say, 2018-19, the ERP is the average of the global price prevailing during 1986-88 fixed in rupee terms. If the subsidy given by a developing country exceeds 10 per cent, it will be treated as violation of its WTO commitment.

The rationale behind putting a cap is that excess subsidy given to farmers in any member country has the effect of giving unfair advantage to them in the global market by artificially lowering the price of their food supplies — known as “trade distortion.” The cap is intended to prevent this.

India runs a mammoth programme of Public Stockholding (PSH) for food security purposes. Under it, agencies of the Government like the Food Corporation of India buy agri-produce from farmers at the MSP and distribute it through a network of fair price shops to meet the needs of India’s poor and vulnerable population. Since the MSP is higher than the ERP, the excess is deemed as subsidy under the AoA.

India’s argument is that supplies from the PSH are meant only for beneficiaries and not available for export, hence there is no question of these supplies causing any distortion in global trade. Therefore, it should be excluded from the calculation of AMS to see if the cap is breached. The logic is sound. But the crucial question is why did India not press for this exemption from day one? Why did it not insist on its inclusion in the AoA that came into force on January 1, 1995? That apart, even the methodology of calculating the AMS is flawed.

First, the MSP for the relevant/current year is compared with the ERP that prevailed way back in 1986-88. Second, quantities not procured by Government agencies are also considered for arriving at the subsidy figure. Third, subsidy on agri-inputs to resource-poor farmers (they produce food for self-consumption and have no marketable surplus) is included. These flaws have the effect of artificially inflating the AMS. For instance, as per a May 2018 submission by the US to the WTO, during 2013-14 the Indian AMS on rice was 77 per cent against only 5.45 per cent it should have been sans these aberrations. In view of the above, forget getting exemption, the anomalies in AMS calculation have made India’s PSH programme potentially susceptible to violating WTO commitments.

The MC-9 in Bali (2013) agreed to a “peace clause” under which “if a developing country gives AMS in excess of 10 per cent, no member will challenge this until 2017, when the WTO would look for a permanent solution to address their food security concerns.” It came with several riders such as submission of data on food procurement, stockholding, distribution and subsidies. These also included establishing that subsidies are not “trade distorting.”

In the WTO General Council (GC) meeting on July 31, 2014, India insisted on a time-bound action plan to find a permanent solution, to be executed before the end of the 2014 co-terminus with the approval of the Trade Facilitation Agreement (TFA) — an area of great importance to developed countries. This was a good strategic move but it was abandoned midstream.

In December 2014, even as the latter got away with the TFA, the former got “extension of the peace clause till a permanent solution was found.” Put simply, India had literally surrendered its right to secure a permanent solution; that it was “Ok” with “the benefit of peace clause.” However, being subject to a host of riders, even this is not automatically assured.

Meanwhile, the US and EU nations continue to give subsidies at a level much higher than the five per cent (threshold applicable to them), yet remain compliant with the WTO. Unlike India, which subsidises agri-inputs and MSP to farmers, they achieve the same result by making direct cash benefit transfers (DBT) to farmers which is exempt from subsidy cap obligation.  In regard to SSM — it allows members to temporarily raise tariffs beyond the “bound levels,” — this is the maximum permissible duty that a member country can impose under bound rate agreement; for instance, in case of wheat, it is 80 per cent — to deal with surging imports and resultant fall in prices.

The 2015 MC-10 in Nairobi had recognised that developing countries will have the right to take recourse to it as envisaged under the Hong Kong Ministerial Declaration. But this comes nowhere near India’s demand to amend an already existing provision in Article 5 of the AoA to provide them the same benefit that developed countries derive from Special (Agricultural) Safeguards (SSG).

In short, it is a case of lack of care and foresight on the part of our negotiators at the WTO in letting a flawed formula for the AMS calculation to creep into the AoA in the first place and a missed opportunity to make corrections (2014/15) that have led to the present precarious situation for developing countries.

Even as India has flagged these issues yet again, one wonders whether the developed countries will agree to remove the flaws in the AoA or allow exemption for subsidies given under the PSH.

The Government needs to think out of the box. It may consider DBT to farmers; India can give it without any cap and yet remain compliant with its commitment under the WTO. However, in the current atmosphere of anger over the three farm laws, what will happen when the MSP goes (this is a natural concomitant of introducing the DBT)? Prime Minister Narendra Modi faces a Hobson’s choice.