In the footsteps of Donald Trump

In the footsteps of Donald Trump 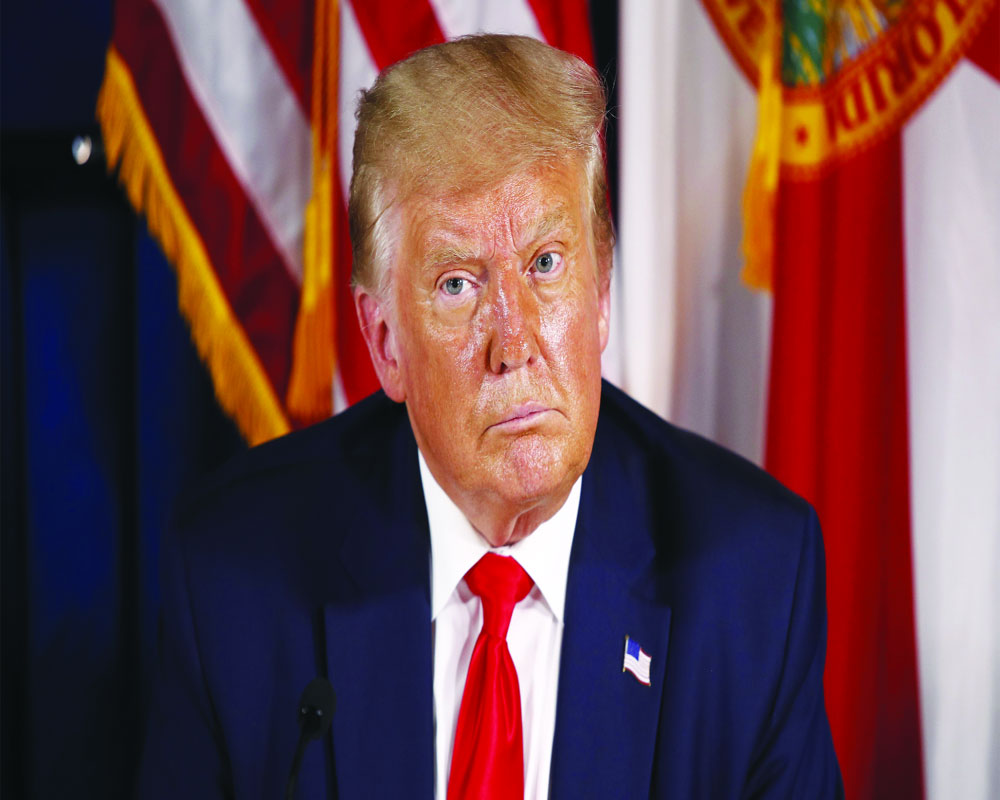 Under him, America abdicated its role as the beacon of democratic norms. Trumpism may be on the wane there but it is alive and flourishing in India

Former United States President Donald Trump’s blatant disregard for all norms of civilised behaviour, his overt racism combined with an outsized ego and the propensity to lie — 21 per day during his term as per The Washington Post — are well known. Yet, despite this, or the 400,000 pandemic deaths directly attributable to his lack of leadership, or his futile and rather ludicrous attempts to overturn the election results, he still continues to enjoy the support of approximately 34 per cent of the population as per the latest Gallup Poll.

This is indeed intriguing, and while much of it can be attributed to racism, bigotry and illiteracy, it was his sophisticated use of the media, especially social media, that was probably the game-changer. Unfortunately, while his brash and uncouth ways may have made him a laughing stock internationally, it also made for a very dangerous and unstable world, in which America had abdicated its role as the beacon of democratic norms and human decency. Worse, he became the poster boy for a cohort of other tinpot dictators and autocrats globally, suddenly free to do as they pleased, with little fear of retribution.

“If you tell a lie big enough and keep repeating it, people will eventually come to believe it,” said Joseph Goebbels, Hitler’s Minister for Propaganda. However, he did add a caveat: “The lie can be maintained only for such time as the State can shield the people from the political, economic and/or military consequences of the lie. It thus becomes vitally important for the State to use all of its powers to repress dissent, for the truth is the mortal enemy of the lie and thus, by extension, the truth is the greatest enemy of the State.” It’s something every autocrat and dictator instinctively understands.

While swatting flies with a sledgehammer has its advantages, there are those who have understood and utilised the concept of “Zohnerism” to their benefit. The term, coined by journalist James Glassman, refers to “the use of true facts to lead a scientifically and mathematically ignorant public to a false conclusion”. It is derived from the experiment conducted in 1997 by Nathan Zohner, a 14-year-old student, who gathered petitions to ban “DHMO”, or Dihydrogen Monoxide, as the basis of his science project, titled “How Gullible Are We?” The experiment involved calling water by an unfamiliar scientific name and listing some of its effects in a particularly alarming manner, such as causing burns when in a gaseous form, accelerating corrosion and causing suffocation! Incidentally, Zohner convinced 86 per cent of his classmates to sign the petition calling for its ban, which tells us a lot about human nature.

Trump used this phenomenon to good effect. While established media outlets may not have fully played along, the conservative and extreme Right-wing media outlets, like Fox News and One America News Network, did broadcast his lies and conspiracy theories with telling effect. The digital social media platforms too, such as Facebook and Twitter, were no less complicit in spreading his message of hate till they finally banned him for inciting violence.

After what we have witnessed during his presidency, it would be fair to say that the American democracy, despite its deep roots stretching back 244 years, has survived a direct assault on its very foundation by Trump and his acolytes by a hair’s breadth. Thanks, in no small measure, to the strength of its democratic institutions and the upstanding character of the people who run these. An outstanding example, but not the only one, being that of former Vice-President Mike Pence, who did not let his unswerving support and loyalty to President Trump get in the way of doing the right thing, despite intense pressure to subvert the constitutional process. The other institution that deserves accolades, surviving with its dignity and reputation intact, was the judiciary. Trump had expected that having appointed a total of 200 Federal Judges with lifetime tenures, including two to the Supreme Court, they would remain beholden to him and act in a manner to support his agenda. He was, therefore, understandably shocked and disappointed when nearly all of his 60-plus challenges to the election results were summarily rejected by the courts, including two by the Supreme Court.

While Trumpism may be on the decline in America, it is alive and flourishing here in India. Make no mistake, the current dispensation — while more circumspect and less colourful — has been just as damaging for our democracy. Our secular traditions are in tatters, empathetic behaviour forgotten and democratic institutions have all but crumbled, lacking even a shred of credibility. A vast majority of our media have become willing handmaidens of the Government. The military is being incrementally politicised and even our final bulwark, the judiciary, especially the apex court, is perceived to be functioning in tandem with the Government. Worst of all, we have no Opposition leadership worth the name, debilitated by the cancer of dynastic ambition.

Yet, hope springs eternal. After all, we have just witnessed a young untested Indian cricket team rise like a phoenix from the ashes of its worst defeat. Despite being deprived of its charismatic leader, another stepped up from the shadows, doing the impossible and leading the team to victory. Similarly, we too should shun fear and do the right thing; the rest will follow.