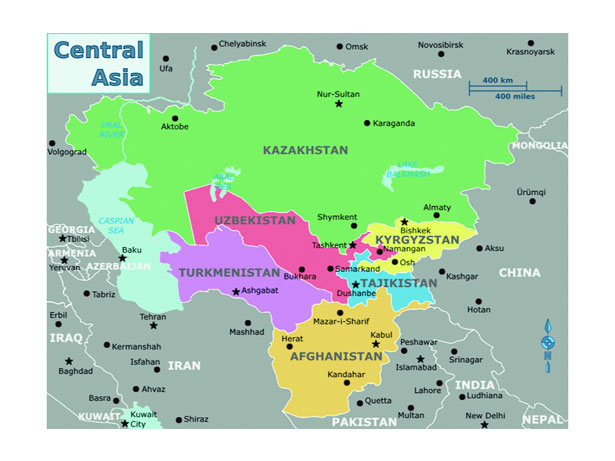 Despite a solid economic partnership with China, central Asia is well aware of its deceitful nature

Leaders from five central Asian countries comprising of Kazakhstan, Turkmenistan, Tajikistan, Kyrgyzstan and Uzbekistan could be the chief guests on the next Republic Day. This comes close on the heels of the Russian president’s tour to India that re-emphasized Indo-Russian strategic friendship. All this happens in the backdrop of India finding new strategic allies such as the US, and Russia’s growing intimacy with China and Pakistan. It brings the focus on the big global powers trying to recalibrate their strategic, geo-political and military alliances in a post-Covid, multipolar and a more transactional world order. India, therefore, has made the right move by focusing on a specific regional cluster of nations, i.e., Central Asia, within its larger foreign strategy. If the heads of state of the five Central Asian republics attend as chief guests on January 26, 2022, it would be the second occasion after 2018 when regionally important ASEAN leaders had been the chief guests. It would be a good optical moment for India to showcase its increased influence over the central Asian republics, specifically to China and Pakistan. The five countries share land borders with Afghanistan and some also with China, Russia and Iran. The Afghanistan situation is increasingly threatening to spill over and start impacting the rest of the landlocked neighbors and beyond. The immediate threats are a barrage of illegal Afghan immigrants spilling into these five countries and onwards to Russia and perhaps China and Iran, too. There are additional threats of drug and human trafficking, terror activities and smuggling and the whole of Eurasia starts feeling the tremors. India has a unique position in the relationship because of its historical, cultural and infrastructural linkages with these countries in the past; even though it is now isolated due to its evolving relationship with China and Pakistan. Pakistan, and by proxy China, would not spare a chance to use the Taliban-trained militia to create problems for India. China and Pakistan have significant political, economic and strategic interests in Afghanistan that serves as a key gateway into Eurasia for them. China, dictated by its expansionist foreign policy almost teetering towards colonization, steadily strengthened its economic relations with Central Asia over the years. The annual trade between them is approximately $100bn compared to India’s less than $2bn with the same group of countries.That leaves a yawning gap for India to fill by nurturing a strong relationship with them at the earliest.

India was one of the first countries to officially recognize these Central Asian republics in the 1990s. Prior to that, India’s engagement with them was through the erstwhile Soviet Union. In the past three decades, India has hardly developed meaningful partnerships with these geo-politically important countries neighboring Afghanistan. In wake of the current Afghan crisis and a gradual recalibration of the global order, lethargy of the past has to be dropped. Central Asia despite having a robust economic partnership with China is well aware of the deceitful nature of the Dragon. They are also more influenced by Russia and Iran for their security, and strategic interests. Russia, even though it has an empathetic view of China’s narrative on the evolving global order, knows that India is a tried and trusted friend in the region who can be a balancing component. Therefore, Russia would also encourage these central Asian countries to expand their security, economic partnerships with India and have complementarity of policies on regional concerns such as terrorism, drug trafficking and Afghanistan. India has done well by rekindling its Central Asia connect policy (first conceived in 2012). The roads from Tashkent to Thiruvananthapuram and Samarkand to Surat need to be built.